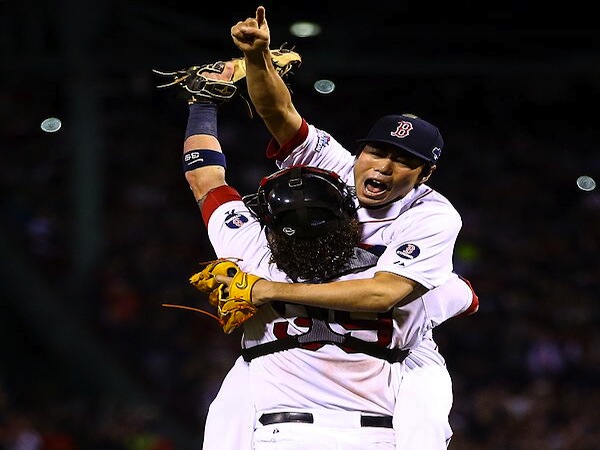 Baseball is a strange sport.

In any other sport you can think of, every team will start out the season aiming to go undefeated. Managers, coaches, players and fans covet it as the ultimate achievement in professional sports.

But it will never happen in baseball.

Even the best teams get beaten 60 times a season. This year’s two best teams and the deserved representatives of the National League and the American League, the St Louis Cardinals and the Boston Red Sox, both lost 65 times throughout the season.

All those losses mean nothing now, as the Sox and the Cards have seven games to decide baseball’s champion for 2013.

This is Koji Uehara dominating October and jumping into the arms of teammates: http://t.co/qKPRW5qwnQ #WorldSeries pic.twitter.com/42j662ZKAp

How it got here:

The Red Sox beat the Rays three games to one, scoring 26 runs to 12 over four games and winning the best-of-five series comfortably. This earned it a trip to the American League Championship Series (ALCS) against the Detroit Tigers.

In a much closer series, the Red Sox won four games to two, outscoring the Tigers by a single run (19-18) over six games. In the final game Red Sox outfielder Shane Victorino blasted a grand slam over Fenway Park’s “Green Monster” to give the Sox an unassailable 5-2 lead and the eventual game and series victory.

Why it can win:

Big Papi. The designated hitter for the Red Sox David Ortiz, has shown a knack of being able to make big plays when it counts. He can hit the ball an absolute mile, and packs pure power in a big package.

Shane Victorino, Jarrod Saltamacchia and Mike Napoli can all hit a very long way themselves, and all three will play pivotal parts in attempting to dull a star-studded St Louis pitching attack.

Boston also has a bullpen filled with excellent pitchers. Jake Peavy is the best of those, and a past Cy Young award winner. Koji Uehara was named the ALCS MVP after throwing three saves and allowing just four hits through six innings of pitching.

Jon Lester and Clay Buchholz both feature in the top 25 lowest ERAs (earned run average) for the American League, which is a measure of how many runs a pitcher gives up over the course of a traditional baseball game.

The last time the Red Sox and the Cardinals faced off in a World Series, the Sox broke the Curse of the Bambino, an 86-year drought. Boston swept the Cardinals, beating them 4-0, in 2004.

How it got here:

With the best record in baseball, the Cardinals took their number one seeding into a National League Division Series against the Pittsburgh Pirates, who won the Wildcard Game. It wasn’t all easy sailing for the Cardinals, as the Pirates pushed the five-game series all the way, but fell at the final hurdle. The Cardinals won 3-2, largely off the back of pitcher Adam Wainwright.

In the best-of-seven National League Championship Series (NLCS), the Cardinals took on the Los Angeles Dodgers, winning the series in six games. Despite the best efforts of Dodgers phenom Yasiel Puig and freak pitcher Clayton Kershaw, the Los Angeles side couldn’t score off Cardinals rookie pitcher Michael Wacha, who was also named the NLCS MVP – only the fourth rookie in MLB history to receive the honour.

Why it can win:

Pitchers are arguably more important than hitters in baseball. If you can stop the other side from scoring – which great pitchers can – you stand a greater chance of winning. St Louis has two of the best pitchers in the game – Wainwright and Wacha. Wainwright ranks seventh in the National League with a 2.94 ERA. As already mentioned, Wacha is only the second rookie pitcher, and the fourth rookie in history to win the NLCS MVP.

St Louis isn’t all about pitching though. It has a bevy of hitters who love to come through in the clutch, none more so than infielder David Freese. If you’ve followed baseball for a few years, you’ll know all about Freese’s heroics in the 2011 World Series, where he clobbered a walk-off home run to take the series to Game 7. The Cardinals would win Game 7 and the championship.

Catcher Yadier Molina, outfielders Matt Holliday and Carlos Beltran, and infielder Matt Carpenter are all capable of winning games off their own bats.

If St Louis falls behind in this series, watch out. It loves coming from behind to win. The Cardinals were a solitary out away from losing the 2011 World Series to the Texas Rangers twice in the ninth inning, but somehow manufactured a win.

Boston will have home-field advantage at the imposing Fenway Park, due to the American League beating the National League in this year’s MLB All-Star Game. However, the ridiculous pitching attack boasted by St Louis will stifle any hitting power the Red Sox can muster.

Jordan Witte is a second-year Bachelor of Journalism (Sport) student at La Trobe University. You can follow him on Twitter at @wittsjw.