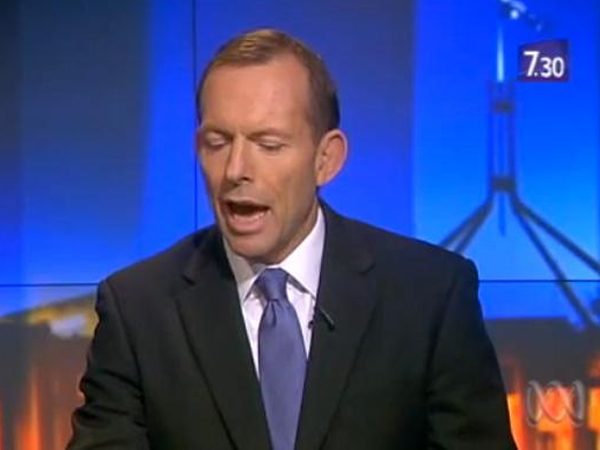 The most interesting political interviews occur when the politician is forced to deviate from the party message.

Leigh Sales pushed Opposition Leader Tony Abbott off the tracks with a simple question: “Have you actually read BHP’s statements?”

Abbott never managed to settle on the track again.

Sales won a Walkley award when she showed good research and attentive listening can be effective means of derailment. While Abbott is allowed to say his piece during the interview he is never in control, as Sales probes into each of his statements to separate fact from spin.

Abbott’s primary goal during the interview was to link the delay of the Olympic Dam expansion proposal with the Gillard government’s mining and carbon taxes. He continually attempts to turn questions into opportunities to attack the carbon tax or the government. Sales never lets him get away with it.

She listens to Abbott, allowing him to argue his points, but as soon as he is done she steps in with a relevant fact or a piercing question. There is no doubt that Sales has control of the interview.

Also, Sales never relies on spectacle. There is no decibel-decided power play, no personal attacks and no hysterical repetition of questions. Sales calmly and methodically fires careful questions and evidence at an opposition leader who quickly becomes a squirming, nervous mess.

This calm approach makes the interview seem more legitimate as a contribution to political debate than an emotionally charged interview could ever be.

The aftermath? Abbott was forced to assert that he had read BHP’s statements. Sales was accused of bias but was cleared of any wrongdoing.

Research and rationality won the day.

Erin Leeder is a first year student in the Bachelor of Journalism at La Trobe University. Follow her on Twitter: @155erin