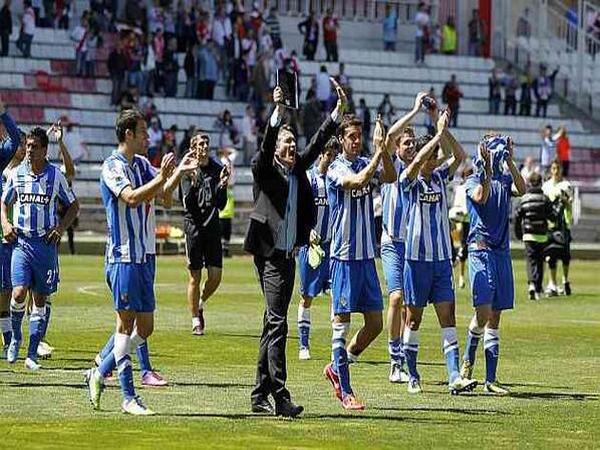 From the Segunda Division to Champions League football in just six years – Real Sociedad’s rapid ascent will go down as one of the great football stories.

What makes it such an incredible feat is that it was accomplished on a shoestring budget.

After being relegated in 2007, Sociedad effectively had two options in its pursuit of promotion: spend excessively and be prepared to go into debt, or continue to rely on homegrown talent.

The club chose the latter.

“Our philosophy was get back to our origins, start again, follow our ideals, deepen them, be who we are,” said the club’s president Jokin Aperribay.

It was a noble decision, and one that has proven to be a catalyst for much of La Real’s success in the past six years. It meant the team continued with a sustainable business model thats functionality revolved around loyalty, rather than spending more than it earned.

For instance, instead of seeking to bring in new faces, it invested heavily in Zubieta – its academy. The majority of players that had played for La Cueta the previous season were also convinced to stay in San Sebastian.

Within just three years, this financial astuteness had already paid dividends. The Basque side netted nearly £4 million less than it had spent in the transfer market, and young stars Inigo Martinez, Ruben Pardo and Asier Illarramendi all emerged from its academy. Moreover, by 2010 it had also returned to Spain’s top-flight.

La Real’s first two seasons back in La Liga were mediocre however, and saw it finish 15th and 12th respectively. At the end of the 2011/2012 campaign it was criticised for a lack of ambition under new manager Philippe Montanier.

Many believed that relying almost solely on its own region was illogical in an era where outlay is usually the simplest path to success.

But the club remained true to its manager and the financial system that had won it promotion. It continued to finance its grassroots, with Chori Castro and Carlos Vela the only two players that commanded a transfer fee over the summer.

This faith was rewarded the following year. In what was a result against all odds, Sociedad finished the 2012/2013 campaign in fourth.

With a TV rights deal approximately a ninth the size of Barcelona’s, and a squad consisting of 17 players that had graduated through its youth system, Sociedad achieved European qualification for the first time in nearly 10 years.

Fittingly, academy graduates Martinez, Pardo and Illarramendi were instrumental all season-long, forming key pillars in defence and midfield. Meanwhile, Vela’s return of 12 goals from the wing ensured the club’s £4 million investment had provided an excellent return.

But what also made it such an astounding season was that European football never really looked likely.

Just over two months into the La Liga season, the club was in the relegation zone. At that point, a Champions League spot would have been the last thing on its minds. Fast-forward 30 weeks later however, and it had been beaten just twice, turning its season on a sixpence.

Led by long-serving captain and one club player Xabi Prieto, Sociedad played a free-flowing, attractive style of football that was epitomised by a 90th minute strike by Imanol Agirretxe against Valencia.

With the game at 3-2, and a Champions League place assured with victory, Agirretxe took a ball that had been headed clear and hit Valencia on the break. The youth product ran the length of the field before delicately lifting the ball over Diego Alves.

It was a piece of play that was symbolic of the way the club had been run for the last five years. Instead of resting on his laurels, Agirretxe backed himself in and killed the match off.

For footballing romantics, Sociedad’s journey and conservative approach has been both refreshing and nostalgic at the same time.

The game is now at a stage where allegiance to a playing strip is virtually obsolete, it has instead become fixated with money.

Yet what Sociedad has achieved in just six years has defied this modern day logic. Its accomplishments have come about by employing only those that wear the team badge with honour.

It is for this reason that Sociedad’s story is a footballing fairytale.

Feats of this nature simply do not occur often enough.