Shane Dunlop, Head of Production at Channel 31 Melbourne, speaks to Upstart about a career affected by the forthcoming changes, which have left community television scrambling to find its feet in the digital world. 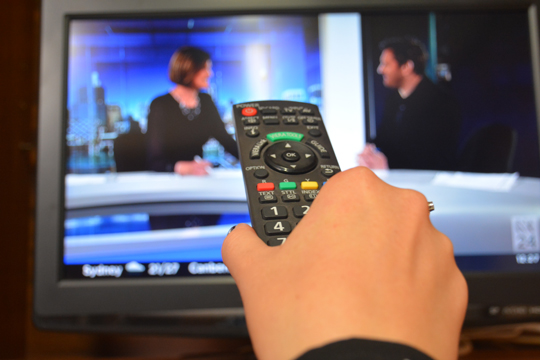 On December 31st the federal government will switch off Channel 31.

After 22 years of operation, the station is being forced online so that space can be made on the broadcast spectrum for more commercial stations.

When Shane Dunlop talks about “31” the conversation continually switches between what it was, what it is and what it will be once the changes are put to effect.

Shane is the Head of Production at Channel 31, and for him community television is an irreplaceable public service in danger of becoming extinct.

“When you boil it right down, it’s that the opportunity exists for everybody to have a piece of the pie when it comes to free distribution of media, that’s created by the people,” he says.

Prime Minister Malcolm Turnbull describes the shift online as a chance for community stations to seize the opportunities of the digital world, and open up new economic opportunities in advertising.

“Turnbull said the economic possibilities are greater now because we’re open to a global audience, while in theory he’s correct, in actual practice it just doesn’t happen…[It] comes from a place that they’re just using numbers to justify, what’s essentially a nonsensical decision.”

The Head of Production was once responsible for creating the commercials that kept the station’s doors open, but is now a hands-on position that facilitates the shows that go to air.

“I’ve been driving that a lot since I’ve been here. The station never use to do its own shows, and it really wasn’t until I got here that I said we should be looking to be more engaging in that way,” Shane says.

“Historically speaking, if you were able to make a show that passed the broadcast standards and guidelines, it would get to air on Channel 31… And the only thing that would really be a factor, would be what timeslot it was broadcast.”

Starting as an independent producer in 2010, Shane found an opportunity at Channel 31 to write, produce and direct his own content.

“I’d always been aware of it [community television], it had always been around for as long as I could remember it, but I became aware of it as being a place where I could actually find a home for the things I was doing,” Shane says.

Completing a Bachelor of Arts in film studies at La Trobe University in 2002, Shane left disgruntled and disillusioned to the possibility of finding a job.

“I sat in class with a tutor who basically said to the entire class forget about a career in this industry.”

While Shane laughs it off now, he admits he took it to heart, giving up on it as a potential career path until he picked up the camera again as part of a “hobby”.

But according to Shane, short-film festivals are a “mug’s game”.

“I don’t know if you can be someone who is just applying themselves, putting in the hard yards, and have a short film that finds any great success, without having to spend hundreds of dollars in short film entry fees,” he says.

The experience of making shorts, while not overly “satisfying” for him, taught Shane about his own creative process.

“Right through until my 20s, and this isn’t the same for everyone I’m sure, all of the things I was coming out with were shit.”

It took time for him to develop his work, and it wasn’t until he had some significant life experiences that he started to become proud of the work he was producing.

“It was more living, f***ing up and having your heart broken or being responsible for breaking someone else’s heart…and then all of a sudden you’ve actually got a perspective.”

Leaving the “mug’s game” behind Shane began his association with community TV, producing a 13-episode series of shorts called The Partridge and the Pear Tree.

The project, which has now been hidden away for “good reasons”, helped Shane develop an ability for writing episodic narrative, and showed him that it was possible to have a career working in television. He was able to leave his “soul destroying” job working in IT at Telstra, and create The Moving Bus, a production company of sorts that has allowed him to obtain funding for the shows that have since aired on 31. One of those was Leongatha, a series based on a real event in Shane’s life, and the first thing he made that had a budget.

“I got a $10,000 grant through the Community Broadcasting Foundation…I raised another $1500 in crowdfunding, and then I kicked in about 3 or 4 thousand of my own.”

The series was a success, and Shane is still selling DVDs to people with an infinity for the region who loving seeing “their little corner of the world reflected on screen.”

“One of the upsides to having the location being like another character of the show, is that you then get the people of that town, and the surrounding region on board with the show.” The same was true with Under the Milky Way, Shane’s latest narrative series, which was filmed in the NSW regional town of Coonabarabran.

Shane talks glowingly of the ways in which the people of that town embraced him and his crew, but it’s not long before he’s drawn back to the reality of the situation facing community television.

“Australian TV is getting less and less local… but what hasn’t left is people wanting to see themselves on TV, and whilst the whole world slowly evolves to just watching it on the internet or digital, TV still holds some appeal.”

Shane admits he doesn’t know what the future holds for Channel 31, the outcomes are “too hard to predict”, but what he does know is that the station will never be the same as it once was.

With a heavy exhale of breath he explains to me the “commercial realities” the station must face in order to survive, and what that means for a “vast majority” of the stations audience.

Those people who, “short of some sort of miraculous reprieve”, will lose access to community TV.

A reprieve that is unlikely to come.

Nick Monley is a first year Bachelor of Media and Communication student at La Trobe University. You can follow him on Twitter at: @NickMonley