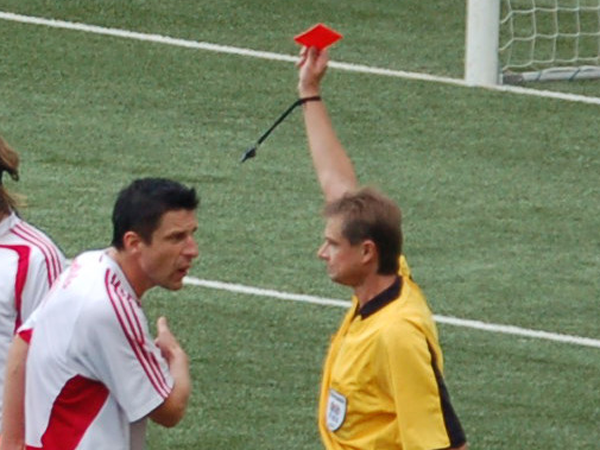 Referees sometimes make contentious decisions, and for better or worse, these decisions are part of football.

A harsh red card, an obvious dive, or a soft penalty can all change a match, and no matter what happens the referees will always be at fault in the eyes of the fans.

It’s unusual however, to see referees torn to shreds by those above them; the administration.

This is what happened to Jarred Gillett and Chris Beath, the two A-League referees who were in charge of last week’s matches – the first round of the A-League finals series.

Both Gillett and Beath made mistakes that have sparked major controversy and have raised doubts about the quality of refereeing in the A-League. As a result, neither of them were considered to adjudicate the semi-finals – Western Sydney Wanderers vs. Brisbane Roar and Central Coast Mariners vs. Melbourne Victory – this weekend.

Beath was criticised for not sending off two players – Brisbane’s Stefan Nijland and Adelaide United’s Tom Juric – for horrendous tackles that should have earned them instant red cards. Juric’s tackle was particularly bad, causing the Roar’s Luke Brattan to be forced from the field.

Brisbane defender Jade North said that the tackle was a disgrace.

“It was a horrible tackle. Absolutely disgraceful. He could have broken his leg,” North told Foxsports on Wednesday.

However, Beath’s failings have barely registered amongst the shock and anger that came from Gillett’s performance in the Melbourne Victory vs. Perth Glory match.

With Perth leading 1-0 and the game ticking over into added time, Gillett awarded Victory a penalty when Steve Pantelidis unfairly brought Andrew Nabbout down in the 18 yard box. What Gillett had failed to see was the clear handball from Nabbout as he controlled the ball.

Instead of a Perth free kick, Melbourne’s Mark Milligan duly converted from the spot, sending the game into extra time. To make matters worse, Gillett then red-carded Pantelidis as he protested about the decision. With a man down, the tiring Glory could not keep up with Melbourne in extra time, and as a result, were soon out of the finals.

Gillett’s controversial penalty call was the main talking point of the game. Subsequently, Gillett will be watching this weekend’s matches at home on the couch.

“Refereeing is one of the areas that has improved but the standard of the A-League is improving at a faster rate. There will be a review at the end of the season,” he said.

When asked about Beath and Gillett, de Bohun said that they had to be held accountable.

“The referees have worked hard and done a good job all year under difficult circumstances but are accountable like players, like coaches, so where obvious errors are made, then they will miss out,” he said.

Last week’s penalty decision wasn’t the first time that Gillett had caused Glory fans a considerable amount of pain. Gillett was in charge for last year’s A-League grand final between Perth and Brisbane. In that match Gillett gave Perth defender Dean Heffernan a red card, and awarded a last minute penalty. Brisbane went on to win 2-1.

These couple of incidents have caused Perth Glory CEO Tony Sage to take the extraordinary step of writing a letter to the FFA, requesting that Gillett never officiate a Perth home game again, due to the public anger directed toward him.

“I would ask the A-League and FFA not to appoint Gillett to any Perth games at home for safety reasons,” Sage wrote.

“Whether it is right or wrong, there’s a perception now with our fan base and at the club regarding Jarred Gillett. So, if we as a club don’t do anything about it then we are not supporting our club.”

Violence is obviously not the answer, and one would hope that Gillett would be able to referee any game safely when he returns to action.

What is clear, however, is that the refereeing standard must be lifted. Basic fouls being missed in such important games is ridiculous. Mistakes, such as those made by Gillett and Beath, occur much too frequently.

The A-League finals are meant to showcase the cream of the crop in Australian football, and that includes the match officials.

Paddy Naughtin is a third year Bachelor of Journalism student, and a current member of upstart’s editorial team. You can follow him on Twitter here @PaddyNaughtin.