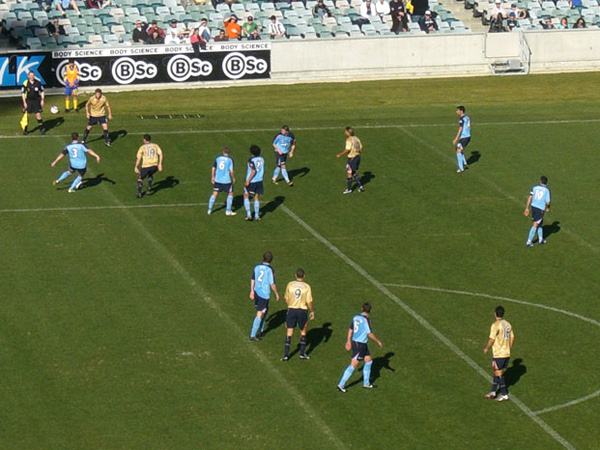 As the A-League gears up for what is sure to be an exciting finals series, take a step back and look at how far football in this country has come.

Football in Australia is in a very healthy state. The A-League is continually producing better quality matches, our youngsters are being picked up by big European clubs, and the Socceroos are still in the mix to qualify for the 2014 World Cup in Brazil. Football Federation Australia should be proud of what they have achieved in the past 10 years.

Once upon a time the football landscape in this country looked extremely bleak; the old National Soccer League was falling apart at the seams and the Socceroos hadn’t qualified for a World Cup in decades. Things looked grim.

In 2003, Frank Lowy was elected as Chairman of the FFA, and since then football in Australia has been headed in an ever upward trajectory.

The A-League, now in its eighth season, has been a huge success. Crowd attendances and television ratings are at an all-time high. The $160 million broadcast rights deal between Foxtel and SBS is the largest in Australian football history. From next year there will even be live A-League games on free-to-air television, something which hasn’t happened before.

The A-League’s newest club Western Sydney Wanderers has also been a roaring success. They are only one result away from clinching the Premier’s Plate in their first season in the competition – a feat not many people believed to be possible. However, with their marquee player Shinji Ono on the sidelines for the rest of the season, the Wanderers’ path to the grand final will not be easy.

With such fierce competition, anyone can reach out and grab the championship.

Central Coast Mariners have had a stellar season this year, partly thanks to their goalkeeper Mat Ryan. The custodian has had another quality campaign, pulling off some incredible saves and vital clean sheets. The Mariners also boast the league’s top goal scorer in their midst – Daniel McBreen. His 16 goals have proved invaluable to Central Coast.

With a bit of luck the Mariners may even be able to clinch the minor premiership with a win over Melbourne Heart this weekend. However, they would need the Wanderers to lose in order for that to happen.

Another contender is the Melbourne Victory. An inconsistent start to the season has faded away, and the Victory are back to their ruthless self. The 2012/13 season has seen the Victory’s New Zealand international Marco Rojas come into his own. In previous seasons, Rojas has shown glimpses of what he is capable of, but this year he has been on fire scoring goals and creating assists. He’ll be a front runner for the Johnny Warren Medal for sure.

Adelaide United will also be pushing hard for the championship. Adelaide have always been around during finals time, but are yet to lift the A-League trophy after the grand final. Their main danger man is the explosive Dario Vidosic who has scored nine goals this season. Vidosic’s three year’s playing in Germany sharpened his skills, and it’s easy to see that he is a top echelon player in Australia.

The finals will go down to the wire, so be ready for an exciting race. But keep in mind just how far we’ve come in the past decade. It should keep a smile on your dial no matter who wins.

Paddy Naughtin is a third year Bachelor of Journalism student at La Trobe University, and a member of upstart’s editorial team. You can follow him on Twitter @PaddyNaughtin.