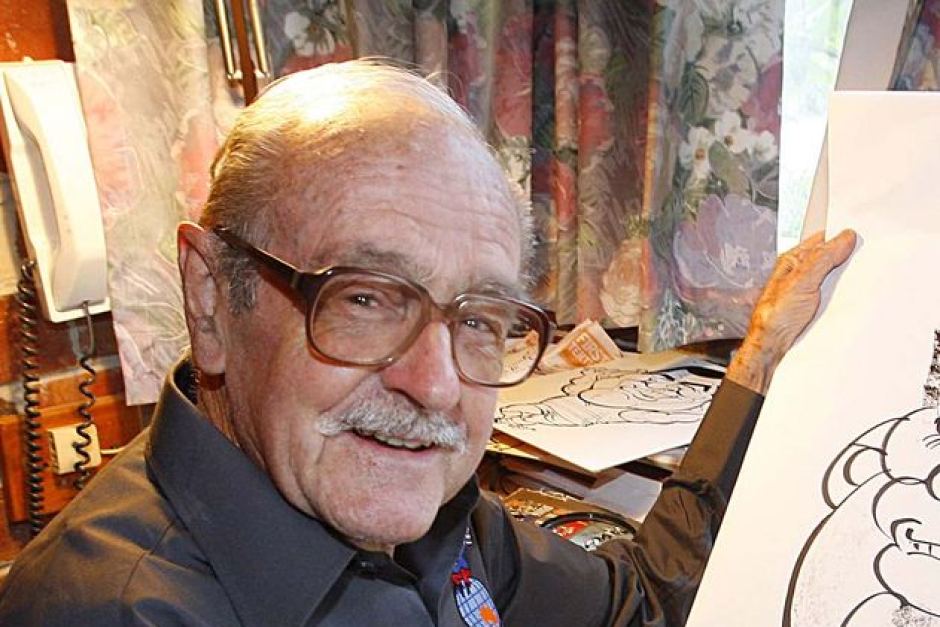 For over fifty years, as the final siren sounded across the MCG on Grand Final day, thousands of spectators would line up to get a copy of the Herald Sun AFL Premiership poster featuring the winning side.

The late William Ellis Green, or WEG as he was commonly known, was a political cartoonist and the illustrator of the posters from 1954 until his death in 2008.

His illustrations have gone on to amass a huge following among Australian football memorabilia collectors who now pay top dollars for an original WEG poster.

Green began submitting cartoons to the Melbourne Herald in 1946. He was eventually hired as a replacement cartoonist for Sammy (S.G.) Wells. In 1947, he became the full-time ‘Topical News Cartoonist’.

The posters were illustrated by Green and distributed by the Herald Sun. They featured a caricature of a smiling mascot or notable player from the winning team.

WEG’s daughter, Lynette Enright, and her husband John Enright, are keeping the legacy alive with their business WEG Art. They sell past Grand Final posters, and produce new posters every year based on original drawings by WEG. John Enright says that the series of posters, drawn by the man he called Bill, should have commenced in 1953.

“There was a 1953 Grand Final poster, but Bill worked Tuesday to Saturday, and on the Saturday in 1953 he left early,” Enright tells upstart.

“In those days, he had no phone at the house so they [the Herald Sun] sent him a telegram asking him to do the art work and [they] would send a cab crew to the house.

“That never happened, so the first Grand Final poster never got released. We still have it,” he says.

In 1954, the Herald were able to publish the first official poster, although not without further complications. 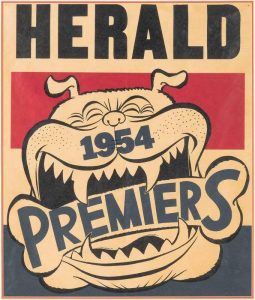 The first WEG poster was released in 1954.

“He did the first drawing, photographed it and ran some posters, but Bill noticed he forgot to put the year on the artwork. So, there are two posters from 1954, one with the year and one without,” Enright says.

With the growing popularity of the posters, an opportunity arose for WEG to use his talent to support the Royal Children’s Hospital.

“In 1966, a gentleman by the name of Jeff Crouch, who was also the umpire boss, had a gig writing for the Herald,” says Enright.

“He went up to Bill and told him he represented the Royal Children’s Hospital fundraising arm who were called the Pied Pipers.

“He said to Bill that they could raise money for the Royal Children’s Hospital by selling the posters for a dollar each.

“And that’s how the first commercially available poster was the St. Kilda 1966. Prior to that, they were just a bit of paper stuck on top of the newspapers,” he says.

To this day, the Herald Sun AFL Premiership posters still donate all proceeds to the Royal Children’s Hospital. Though Bill left the Herald, in 1986, he still produced the posters for the Hospital from home.

After WEG’s death in 2008, editorial cartoonist for the Herald Sun, Mark Knight, took over as poster artist.

What remained of WEG’s 54-year legacy was a community of fans and sport memorabilia collectors, hungry to complete a collection of every poster created by him.

While posters from the past two decades are relatively easy to acquire, WEG’s earlier work from the 50s, 60s and 70s are far scarcer and sell for a higher price.

Oliver Hayes, an avid collector of the posters, has witnessed some very high prices for WEG’s posters. 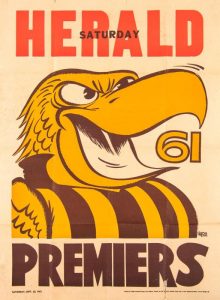 “If you go to the mossgreen website and search ‘WEG Posters’, you will see posters from the 50s and 60s selling for crazy money,” he says.

Posters that illustrate the losing team from each year fetch even higher prices.

Enright explained that WEG would illustrate two posters of each team competing in the Grand Final. The winning team’s poster would be sold straight after the game but almost all the losing team’s posters would be destroyed.

According to Enright, some of the losing team’s posters were kept and distributed by staff at the Herald Sun and the printing press. Today, these ‘losing’ posters have a very high market value.

More recent ‘losing’ posters, from around 10 years ago, are valued at $400, with posters from 30 or 40 years ago valued at many thousands of dollars.

Enright recalled a time when he and his father-in-law discussed the future of WEG’s work.

“In 2001, Bill and I were in the city and he got all flustered. He got all clammy, [and] a little bit white,” Enright tells upstart.

“I said to my wife, “The old man’s not good”, so she took him to the doctors who said he needed a bypass.

“When we realized he was at the end of his life, I asked him. “Do you want this business to be going on when you’re gone?” And he said, “Yes”.

“So, every Sunday, I’d go to his place and he’d knock out three or four different posters,” Enright says.

William passed away on the 29 December 2008 at the age of 85. With all the posters he created during his retirement, the Enrights’ business is able to release new art every year. Enright believes there are enough posters to last another eight years. He and Lynette have a long list of fans and collectors seeking posters.

“We have a list of 100 people who are chasing various years,” he says.

Even nearly ten years after his death, William Ellis Green remains an icon of football culture, and fans from all around Australia will continue to collect his art for years to come.