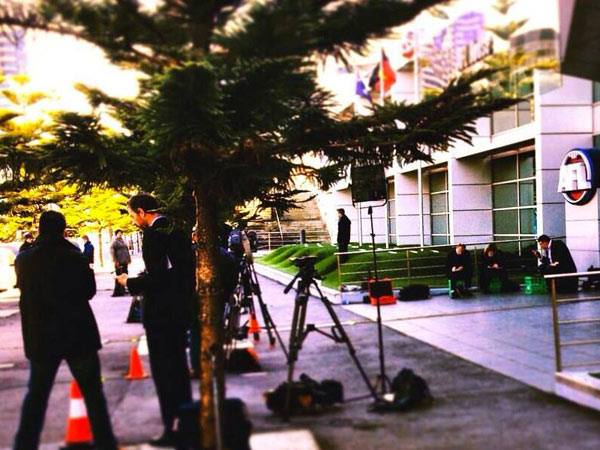 As one tweeter put it, it was the blackest day in Australia’s productivity history.

Well, at least for sports journalists.

As I left my cosy office at the usual time of 5.00pm, I texted upstart’s Liam Quinn, who, like many of his colleagues, was camping outside AFL House in Docklands, waiting for some verdict on the now six-month long investigation into Essendon’s 2012 supplements program.

The statutory body responsible for investigating anti-doping activities of professional athletes, ASADA, had issued an interim statement to the AFL, and according to various media reports, the league was set to charge the club at any minute.

And so, with that in mind, some sports journalists headed to AFL House yesterday morning, and others to Windy Hill, where James Hird was a no-show until around 1.00pm. Media reports suggested that the AFL and Essendon were in “crisis talks” behind closed doors.

But Hird denied this, saying that he had been reading books to his young children.  The journos were a little disappointed, while the rest of us took to Twitter and used the hashtag, #hirdbooks.

Liam replied to my text, saying he was still at AFL House. I offered him the best advice I could at that time: go home.

I offered that advice as someone who, in my professional life, has spent hours camping outside various dwellings: houses, building, offices and the like. But the Occupy AFL House movement yesterday seemed to be the biggest waste of everybody’s time.

Journalists are often forced to wait around when it’s not known when the relevant person will make a comment. This is usually the case with crime scenes, when police officers or victims often speak on location when it’s convenient to do so – and so it’s often just waiting around until the time comes.

The same can be said for the press pack outside of James Hird’s house. We can weight up the merits of their presence, but it’s understandable why they’re waiting around. It’s not known when Hird leaves, or returns home, and journos want to be able to catch him for the latest “I know as much as you do” comment.

Surely, the journos knew that when the AFL was ready to announce that it’s laying charges on the Essendon Football Club, this would be done in an organised press conference, as it was in the evening, rather than as a throwaway comment as someone entered or exited the building?

This is exactly what happened when the AFL advised that at 7.30pm, it would provide an update on the supplements saga. Everyone had ample time to get there.

Having spoken to numerous people who were part of the camp yesterday, it seemed the feeling on the ground was one of anger and resentment towards both Essendon and the AFL.

Various journos put in calls to both Essendon and the AFL and received the typical “no comment” from both.

I’m not suggesting that this whole saga has been media-managed brilliantly by either the club or the league.  But why were the journos so intent on playing the game yesterday?

Most of the heavyweights that were there have offices a short walking distance from AFL House.  And yet they felt the need to stand there, in the cold, for hours, waiting for what had the strong possibility of turning out to be a non-event.

Yes, the AFL could perhaps have told the journos that it had no statement to make during that day.  That any decision to announce charges would be communicated to the press well in advance, as it was, later in the evening.

But it didn’t.  Who knows why.  We can speculate, but there’s little point in doing that.

It does however, take two to tango. I understand that some broadcast journos were doing live crosses throughout the day – these days in the sporting world, “nothing has happened yet” is dubbed breaking news.

But what about all the other journos? After asking around, no-one has been able to provide me with a compelling answer of why the journos simply didn’t pack up and leave, knowing very well that if the AFL was going to communicate a decision, then everyone would be notified in advance. And that’s what happened in the evening.

But instead, everyone spent eight or nine hours standing around, sitting on milk crates, being fed pizza and ice cream, had tempers rise and frustrations grow. So much for productivity.

As journos, we’re often told that we create a circus around particular stories – especially in this case with the biggest sporting story of the year.

But there comes a point when, as journos, we need to be able to say: “We’re not playing this game. Call us when you’re ready to speak.”

Erdem Koç is a lecturer in journalism at La Trobe University. You can follow him on Twitter: @erdemkoc