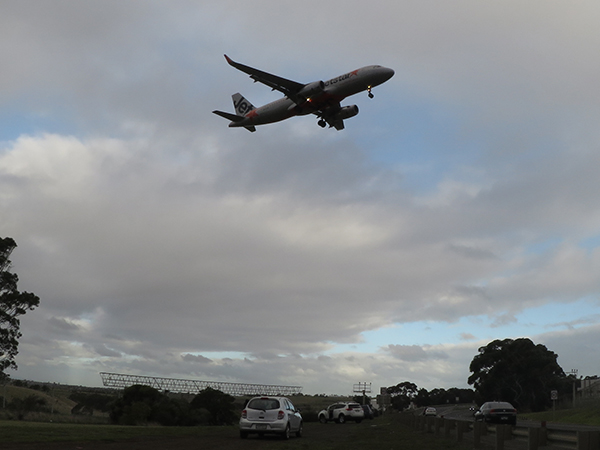 There’s a little dirt parking space across the road from Melbourne Airport’s northern fence. It’s muddy and potholed and offers no protection from the day’s wild weather, but it does have an ice-cream truck.

The space is filled with families, couples and individuals of all ages, escaping from the wind in their cars and looking up at the sky. They are waiting for the incoming planes.

But this isn’t an organised event. The scheduled planes aren’t special, just regular commercial jets. It’s also highly unlikely any of these people know anyone on board. These people have come to this car park simply to look at the planes as they fly overhead.

Plane spotting is an informal outing, hobby or curiosity for many of the assembled watchers. To join is as simple as following the signs to the aircraft viewing area, claiming a spot and waiting for the action to come to you.

Sheridan brings her two young children every two months. She tells upstart that while her children always love watching planes, they get particularly excited when they get to go out and spend the afternoon at the viewing area.

“It’s just so simple,” she says. “It’s free and you can make up stories about where people have been and where they come from.”

The carpark is not the only viewing area, but it’s one of the most popular locations for plane watchers. It’s about 1200 metres away from the end of the main runway, so not only can you see the planes at close range, you can hear the thunder of the engines and feel the force of the wind as the hulking piece of machinery soars directly over your head.

This is exactly what drew first-time plane spotters Phil and Marian to the car park. The Essendon residents had always wanted to watch the aeroplanes coming in, and had been out shopping when they decided on a whim to drive out to the airport.

“We’re hanging out for a big one for a full on experience. I want undercarriage, I want noise, the lot,” Phil says.

They’ve been doing their research. Marian has a plane finder app open on her phone and she says the big transcontinental planes should be flying over our heads and landing on the main runway. 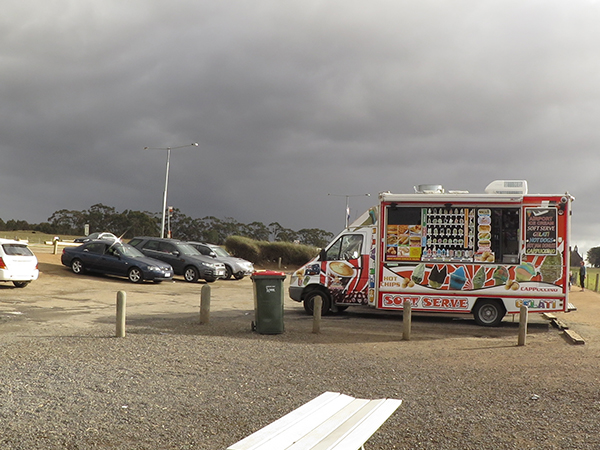 A mother and daughter pair in the next car are also using apps to track the planes. For these more experienced spotters, it’s simple to explain the draw of the activity.

“I just like planes,” the mother says. “I’ve always liked them, just watching them come in and land over you. But they’re not doing it today.”

It’s been an hour and the only close-up aerial action we’ve seen is the flying contents of a large bin blown over by the strong winds.

It seems the weather is too wild for the large planes to land safely, and eventually the lack of excitement and the incoming heavy rain chases away the car park’s occupants.

The underuse of the main runway means many of the other viewing areas are relatively quiet. The Operations Road viewing area is said to be popular with photographers and, on a good day, you can film or photograph the large planes right as they land or leave the runway.

However, today is not a good day, and many cars only stop for a couple of minutes before driving on.

There is still one place left. There are no signs, but the entrance to the path off Sunbury Road is obvious. There’s a clear set of mud tracks leading around to a line of approach lighting.

This is where the domestic planes come in to land. They may not be as large and exciting as the transcontinental planes, but they are appearing regularly and they have attracted a small crowd.

James, a young man with a serious camera, is one of the many people parked along the makeshift track.

He has been plane spotting for five or six years and, for him, the best part is that it combines two of his passions.

“I love aviation, and I love photography as well, so it’s a mix of the two,” he says.

“It’s a massive piece of machinery and it’s flying so quickly over your head – I love that. And being able to capture that is pretty amazing.”

It’s a sentiment shared by the diverse group who have stopped by the side of the road, drawn by the simple desire to watch the planes pass by.

Erin Leeder is a third-year Bachelor of Journalism student and upstart’s Culture and Lifestyle editor. You can find her on Twitter: @155erin.