In recent weeks, the French prosecution dropped their preliminary inquiry about allegations concerning Dominique Strass-Kahn’s participation in a group rape of a Belgian sex worker. 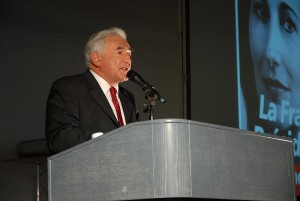 This will probably not be the last episode in Strass-Kahn’s downfall, which started about a year ago.

In May 2011, he was arrested in New York after a young maid claimed that he had sexually assaulted her after she entered his suite.

After completing a lengthy investigation, prosecutors filed a motion to drop all charges against Strauss-Kahn, stating that they were not convinced of his culpability.

It was deemed that there were reasonable doubts over the maid’s credibility, as well as problems concerning inconclusive physical evidence, and therefore the prosecution could not take the case to a jury.

Although the case was dismissed and the charges dropped, Strass-Kahn waived all his responsibilities and his political career was put on pause.

‘Perhaps I was politically naive, but I simply did not believe that they would go that far. I didn’t think they could find anything that could stop me,’ Strass-Kahn told investigative journalist Edward Jay Epstein.

He accepted that he had a sex with the maid but by no means did he try to rape her.

‘By legal definition, rape is sexual penetration without consent. The difficulty lies on the fact of consent; whether it can be proved that the person was or was not consenting. Then there is the second part, which is if the accused understood whether the consent was given,’ says Dr Kirsty Duncanson, lecturer in Legal Studies at La Trobe University.

Strass-Kahn was an easy target, as he never kept his passion for women secret.

‘Before that afternoon, Strass-Kahn was more than a revolutionary politician that ushered in a series of firsts for the France’s political life, and was the exit polls favourite for a victory against Nicola Sarcozi […] [He was the] first French socialist leader to have officially discounted Marxism, the first Jew directly elected to the presidency and the first seriously rich president in a country where money, not sex, is a dirty word,’ says Anne-Elisabeth Moutet.

But most likely Strass-Kahn will be remembered for his misbehavior.

‘It is more fascinating remembering a politician for their sexual malpractice and not for their political achievements,’ Dr Duncanson says.

But why cannot Strass-Kahn return to the glory days when everybody bowed down to him (figuratively)? Is it because we cannot accept politicians have a private life? Do we still care about political sexual political scandals?

The truth is that although political sexual scandals attract public attention, even if they are of little significance to public policy,  voters feel otherwise.

For instance, we deem it insignificant if a politician cheats on his spouse. However, if a politician is accused for sexual harassment, in all likelihood it will spell the end of his career.

‘Of course there are many male politicians that have seen their political career destroyed after sexual wrongdoings, but let’s consider John F. Kennedy’s activity; he wasn’t indicted for his relations with Marilyn Monroe,’ Dr Duncanson argues.

The biggest criticism for Strauss-Kahn though, it is not about his sexual desires but for  his rich background and his expensive taste in watches, suits, pens and cars.

As a head of IMF, he used to earn a modest salary for an international banker, but his job came with a generous expense account. He used to earn about $420,000 a year in his salary, plus pension contributions and generous benefits. In addition to that, ‘to enable [him] to maintain, in the interests of the Fund, a scale of living appropriate to [his] position’, he received about $75,000.

Although all the above could not be of major importance in the start of his career, no one, especially no one of his colleagues, could turn a blind eye into the financial extravagance of a politician during a global economic crisis and while the French economy is speeding downhill.

But, is there any point to be politically resurrected?

He had served as a minister of Economics, Finance and Industry in France and was responsible for the incorporation of France into the Eurozone. Also, he was among the top economic leaders of the world as he was the managing director of International Monetary Fund from 2008 to 2011.

I am not claiming that he is saint, nor am I suggesting he is the Savior.

The real truth is that listening to the voice of a man of his experience and economic achievements can only help France and Europe that now as they  try to balance on an economic tightrope.