Surrounded by landfill and rubbish with the smell of a polluted inner city waterway wafting by, Brunswick Council workers plant indigenous trees as seedlings as part of a community vision of a shared environmental and recreation space for future generations. The year is 1985. 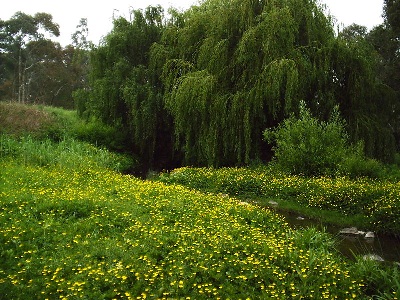 Today, dwarfed by those same seedlings, members of the Friends of Merri Creek, including those involved in the early years, gaze into the tops of the trees identifying local birds on their quarterly bird survey.

‘Did you read that article in The Age magazine? It said bird watching is the new in thing for the latte sipper crowd,’ one of the groups says with an air of indignation.

The FOMC has so far outlived governments, survived council amalgamations and freeway development threats and will undoubtedly continue beyond this presumed passing fad.

The hardcore group sets off after waiting long enough, sharing the crisp morning with runners, walkers and cyclists along the surprisingly busy Merri Creek Trail in East Brunswick.

A newcomer to the group spots what they think is rubbish in the top of a tree on the opposite side of the creek. After her binocular examination Ms McGregor announces, ‘No, it’s a pair of Tawny Frogmouths. That’s great! You’re a natural at this’.

These days the Merri Creek is Melbourne’s most polluted waterway, an issue that is of utmost importance to the Merri Creek Management Committee (MCMC) manager, Luisa Macmillan. Speaking about the quality of aquatic systems, Ms Macmillan says one of the MCMC’s main aims is ‘lessening the impacts of stormwater infrastructure’.

Further down the creek in Northcote, the Merri Park Wetland is flourishing after the recent rain. A project led by the MCMC with Darebin Council and Melbourne Water, the wetland provides a fantastic habitat for frogs and waterbirds. MCMC Administration & Information Officer, Ray Radford, explains how the man made wetlands along the creek have imitated natural areas and operate in the same way, with water flowing through the wetlands depending on the season. Like Ann and Bruce McGregor, he has been involved with the FOMC and other local community groups for many years after joining the FOMC in the early ’90s.

Mr Radford had returned to his childhood neighbourhood of Northcote in the late’ 80s when he noticed the FOMC while running along the Merri Creek Trail. Tired of campaigning on world issues at a time when ‘it felt like the end of the world’, he turned his attention to local conservation.

‘I thought at least if I’m involved in local conservation, if I’ve gone out and planted a few plants, that’s something I’ve done,’ he says. ‘All those world affairs are out of my hands but I can take this action locally.’

In 1989, the MCMC and FOMC were established as separate incorporated associations, however the two organisations work together on many projects.

‘We help each other,’ Ms McGregor says.

‘The ‘Friends’ get a lot of grants as a community group for revegetation. The management committee staff helps to write the applications and then part of the grant is often used to contract the management committee’s parkland management team to prepare the site. We come on the planting day and plant the trees. We just do the easy stuff and enjoy a barbecue, which they provide.’

She explains a common problem with Landcare groups is volunteers burning out. ‘We’ve got a more sustainable relationship. Things keep going. They don’t fizzle out,’ Ms McGregor says.

Despite the heavy involvement of a number of die-hard older members, Ms McGregor says the FOMC committee understands a need to attract younger members.

‘It’s important to have some succession planning and have the younger generation coming in,’ she says. ‘We’ve been trying to invite people who come along to plantings who might be interested to come along and take the next step.’

However Ms McGregor is aware of the obstacles in attracting the younger generation. ‘One of the issues is that plantings start at 10am on a Sunday which isn’t a very popular time for a lot of young people. They’d rather be in bed,’ she laughs.

Already the actions of the FOMC have reduced the Craigieburn Bypass’ planned six crossings of Merri Creek to one, while a ‘quick’ read of the Merri Creek and Environs Strategy 2009-2014 produced by the MCMC details numerous actions of ‘Very High Priority’ for the region.

The Environs Strategy’s overarching goals emphasise sustainable restoration and preservation of the waterway to its original state while encouraging responsible recreational use. The restoration acknowledges the Wurundjeri people who originally lived in the area with many of the sites along the creek being named by the Aboriginal elders.

The endangered Myrnong Daisy, a native yam, which was a staple of the local Wurundjeri people, is another feature of the catchment that is being restored in the area. According to Mr Radford recent plantings of the Myrnong in the suburban areas of the creek are doing well.

Although he may have set out to think globally and act locally, his work with the MCMC is obviously taking him beyond his Northcote locale. This, he says, is what keeps him and so many others still interested in looking after the Merri Creek catchment. No matter how much has been achieved there’s still more to be done and more achievements to be had as time flows on.

Speaking of achievements, the Friends Of Merri Creek won the Victorian Urban Landcare Award in 2011 and will go on to represent Victoria in the National Landcare Awards this year. But it’s not surprising with members like Ann and Bruce McGregor, a couple who, faced with a polluted waterway that was being used as a dumping ground, could see tangible outcomes and always hold optimism for the future.

Xenon Ellis is completing a Bachelor of Arts (Media & Communication) at Deakin University. You can follow him on Twitter: @xenonellis.