From evacuating thousands away from war zones to helping make rape a war crime, Helen Durham’s career is an incredible one. 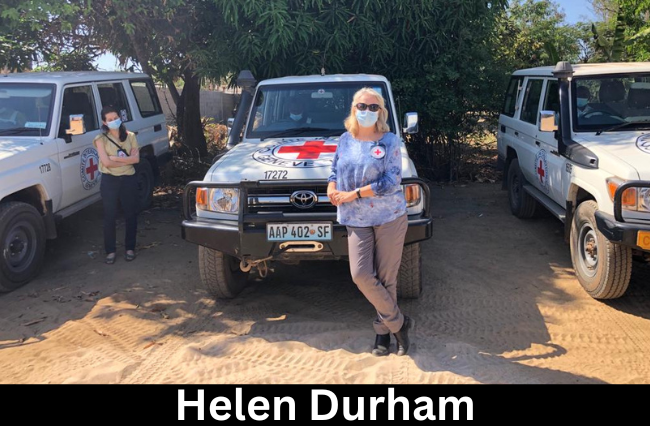 In war, prisoners and detainees can be tortured, denied medicine and starved. As those detained try to hold onto hope, Helen Durham marches into the conflict. Armed only with an International Committee of the Red Cross (ICRC) emblem patched to her shirt to signify neutrality, she and her colleagues move into war zones to ensure a “minimum of humanity” for everyone.

While war is traumatic for the victims, it can also take its toll on those who are there to protect them. Durham has often found herself in confronting situations.

“You’re up at a checkpoint with your hands against the four-wheel drive, with guns everywhere, hoping that they understand that you’re there to be neutral, you’re not taking sides nor there to gather evidence to push for prosecution,” Durham tells upstart.

Putting herself in vulnerable positions is the sacrifice she takes to be able to protect others. As a part of her role as the Director of International Law and Policy at the ICRC, Durham worked with her colleagues to engage with what many call terrorists (referred to as non-state armed groups in the Red Cross), in offering better care for prisoners of war and humanitarian support for civilians. This process can involve contacting groups involved in armed conflict, via a range of social media, including WhatsApp, to inform them that the Red Cross will be visiting areas under their control, delivering food and first aid to the local population, or providing medical training so the non-state armed groups can aid people under their control.

“It is a complex issue and there is a need for justice for those who commit crimes, but there is also a need to ensure civilians don’t suffer even more in war,” she says. “Our research indicates that over 60 million people are under the control of such groups, and if you completely ignore them or don’t engage at all, what happens to the women, children and men under their control?”

That’s just one of the many initiatives the Red Cross drives in global armed conflicts. Durham and her team work to ensure the laws of war are followed, without picking sides, so that minimal standards of humanity are achieved. 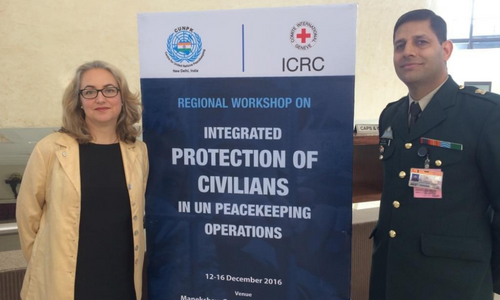 Durham at a protection of civilians workshop in New Delhi. Photo: supplied.

The work that inspired Durham to kickstart her career is perhaps even more striking than her dealings with dangerous groups. In the mid-1990s, Durham received a letter from a friend in the former Yugoslavia who’d been assisting victims of sexual violence in armed conflict, saying that survivors of sexual violence wanted a clear legal precedent that rape was a war crime. This propelled Durham and a few friends into action.

“We worked at getting the evidence of the women from the former Yugoslavia who’ve been victims of rape camps to the prosecution mechanism, which at the time was the tribunal in The Hague,” she says.

The project, which Durham describes as her “entry point” into becoming an international lawyer and working with the Red Cross, successfully contributed to the clarification that rape is a war crime. Further changes have been made since to broaden the scope of what crime rape can be adjudged. Durham explains why this is the case.

“In recent prosecutions, we’ve moved beyond rape just being a war crime and reaching the threshold of the crime being deemed genocide or a crime against humanity. This involves a higher level of intent and a systematic use of sexual violence,” she says.

“The issue about rape is it’s not only horrific and traumatic for the individual, their families, and the community, but it’s also used as a communication tool,” she says. “It doesn’t just have an impact on society, but it often also demoralises the other side who are out fighting, it disempowers and says look what is happening to your sisters, your daughters, your family.”

The 54-year-old says the toughest part of her job is making sure she has strong mental health. It was especially distressing for Durham when her co-workers were in danger.

“In a senior position you are responsible, and the security of your colleagues weighs very heavily on your shoulders,” she says. “It’s heartbreaking to get the call that someone has been kidnapped, injured or worse.”

Despite the dreadful elements of her job, the Victorian Honour Roll of Women inductee kept coming back because she knew the work being done was crucial to the lives of so many. It certainly wasn’t all bad.

“The best thing is when I know the work done has made a difference; when you’re involved in negotiations that mean tens of thousands of people are able to leave a city before an attack, or when you visit people who are detained to improve their conditions or play a role in reuniting a family,” she says. “So seeing the impact of the work is really exhilarating.”

The Aussie, raised in Eltham, had to adjust to life in Geneva over the last eight years to take up the position at the Red Cross, from which she has recently retired.

Greg Arnold, Durham’s husband, has been more than happy to travel with his wife for her career. He says he’s not only “over the moon with pride” of what the Officer of the Order of Australia recipient has accomplished, but amazed at her ability to stay true to who she is despite the sometimes horrific elements of the role.

“It was really incredible to see how she maintained that excellent sense of empathy in general, but also that immense sense of fun at home, because you know obviously, the job was pretty stressful stuff,” he tells upstart. 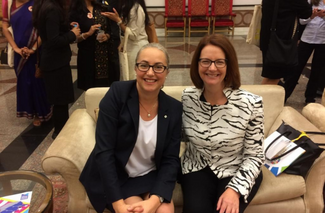 Leaving her family behind and going on missions was difficult at times. Durham accepts that there are perils in her line of work, but tries to avoid unnecessary danger.

“We have had a number of colleagues killed, some of them accidental in the wrong place at the wrong time and other times, sadly, specifically targeted,” she says.

“As a mother of two beautiful children, and as a wife, I would not want to be reckless with my life, but I think if you want to be operational as an international lawyer there’s a certain degree of risk.”

Music can also help people through some difficult times, and Durham says she’s lucky to have a musician husband in Arnold along for the journey. Especially when he writes songs about her that turn into music folklore. His band’s tune ‘Happy Birthday Helen’ has over four million listens on Spotify and reached number nine on the ARIA Charts back in 1992/93. Arnold says the song that he wrote for Durham’s 22nd birthday is a true reflection of how he felt about her then, and still does now.

“In ‘Happy Birthday Helen’ when I said, ‘you are the voice in my heart, that whispers compassion’, that’s a deeply true statement.”

Article | Tarquin Oakley is a third-year Bachelor of Media and Communications student at La Trobe University. You can follow him on twitter @TarqOakley.