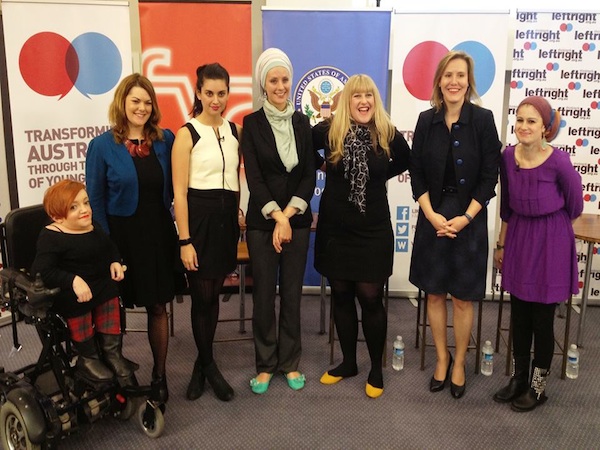 The irony of this week’s political agenda has smacked every women hater fair and square in the face.

Just days after the Prime Minister was accused of launching a “false gender war” – after giving a speech attacking sexism in politics and colour-coordinated leaders – Australia decided to fire a shocking volume of the most grotesque, sexist behaviour which unfortunately for women, supported this battle.

It was evident in two bastions of male dominance – the sporting field and talkback radio booth.

Socceroos coach Holger Osieck’s remarking women should shut up in public was the opening salvo, with WA shock-jock Howard Sattler creating the dominant soundbyte of the past seven days when he questioned the sexuality of Julia Gillard’s partner.

Women everywhere could understandably be appalled at the appearance of treading water in the fight for gender equality, when comments like these took place not behind closed doors or in hushed tones, but were broadcasted from media perches.

While the previous examples could be described as the “signs” of our greater societal ailment, another scandal highlighted the underlying “symptoms.”

Oh, and we haven’t even got to that menu, an act so abhorrent The Guardian named it one of the top 10 sexist moments in politics.

Unfortunately, the lasting legacy of our first ever female Prime Minster’s term – while implementing dynamic policy changes benefitting women – will be highlighting how far from equality we remain.

The Gillard government has focused numerous parliamentary debates around the issue of gender discrimination, in an attempt to shed light on the degree of sexism women face on a daily basis.

However, even after the most recent repugnant attacks on our Prime Minister, last week the government missed a chance to share its message of equality.

Considering Liberal member Kelly O’Dwyer and Greens Senator Sarah Hanson-Young were in attendance to debate the issues surrounding their gender on the panel discussion, it’s perplexing the government went unrepresented.

As much as Ms Gillard’s misogyny speech was a defining moment for feminism in Australia, it isn’t enough for the Labor Party to use the spectre of inequality simply as a campaign tool. While discussion is necessary, grass roots education is equally – if not more – important.

As Bill Shorten told Mamamia, “we need to take steps now to avoid letting down an entire generation of modern Australian women,” the first step would be to show up to an event with the primary goal of empowering and encouraging our next generation of women.

Even with the ALP’s absence, more than 300 high school and university students were among the audience that witnessed an insightful gender equality discussion of feminism in the workforce, language and culture.

Bridget Rollason is a member of the upstart editorial team and the Media Relations Manager for LeftRight Think-Tank. You can follow her on Twitter: @didgeriedoo.