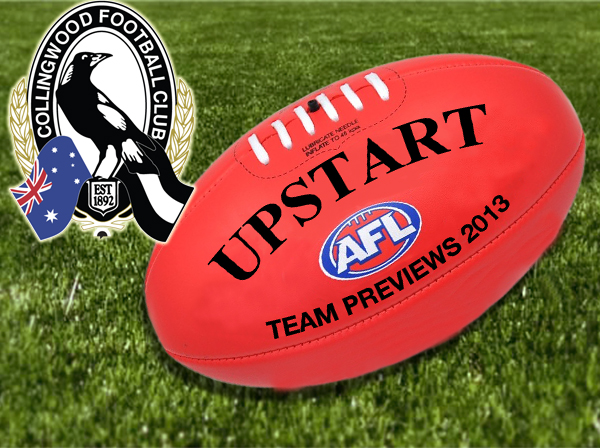 Collingwood look to be in a great position heading into this year’s AFL season, after stumbling just short of making another grand final in 2012.

Collingwood’s depth is probably their biggest asset. Quality players like Luke Ball, Andrew Krakouer, Alan Didak and Ben Johnson missed large chunks of last year, giving some of Collingwood’s youngsters the chance to step up. Jamie Elliott, Jackson Paine, and Caolan Mooney all proved they’re capable and will now have a real fight on their hands to remain in coach Nathan Buckley’s best 22, assuming those bigger name players are fit and ready to go.

To make Buckley’s selection dilemma even harder, Collingwood recruited extremely well over the summer. Quinten Lynch and Clinton Young both joined the Magpies as free agents from the Eagles and Hawthorn respectively. Young’s pace and agility through the midfield, combined with Lynch’s 209-game experienced hands up forward should reap huge rewards for Collingwood in 2013.

Buckley should also be feeling more confident in himself, learning from his first year as head coach and his side’s fourth placed finish. The Collingwood players will also have grown more accustomed to Buckley’s style and tactics, and should therefore be one of the most dangerous teams in the AFL this year.

Collingwood will play 17 of their 22 games in Melbourne, a huge advantage given the incredible support that the Magpie army always provides. If the MCG is again turned into a black and white fortress, the ‘Pies will be on the path to a successful campaign.

Travis Cloke had a very inconsistent year in 2012. His form was patchy, perhaps affected by the distraction of contract talks that plagued him throughout the year. However, hopefully by signing the five-year contract that Collingwood eventually put in front of him, Cloke can clear his mind and get back to doing what he does best.

We all know just how much of a superstar Cloke can be when he is playing well. Last year he was the leading goal kicker for Collingwood booting 59 goals, whilst also leading the competition for contested marks. In fact, Collingwood topped the AFL’s list of both marks and kicks.

There’s no doubt that Cloke is one of the dominant players in the AFL, and he’ll be eager to repay the club for their continued and long-term faith in him. Expect big grabs and lots of goals from him this year.

Circle it on the calendar: Round Nine vs. Sydney

Succumbing to eventual premiers Sydney in the preliminary final last year will have only made Collingwood hungrier for success. In round nine the Magpies will host the Swans in what will be a reverse fixture from their previous encounter.

Before that final, Collingwood had won the last 11 games against Sydney, stretching back to 2006. The legions of Collingwood fans will be hoping that their team can ruffle some feathers and get back to their winning ways against the Swans.

Collingwood finished fourth last year, one win away from a top two finish in the closest AFL season in recent memory – only eight points separated first to sixth. The Pies showed that they have what it takes to match it with the best of the best.

It’s hard to picture Collingwood not challenging for this year’s premiership, especially when the club has players like Dane Swan, Scott Pendlebury, Dayne Beams and many other match winners on their list. With talent like that, anything can happen.

Paddy Naughtin is in the final year of his Bachelor of Journalism course at La Trobe University, and is a part of upstart’s current editorial team. You can follow him on Twitter here: @PaddyNaughtin