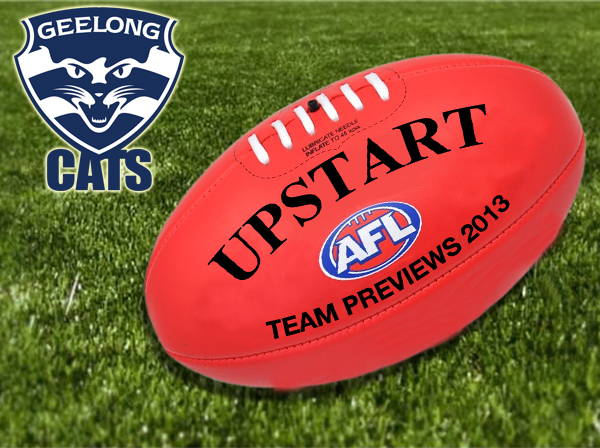 Just where this Geelong side sits in the scheme of things will be one of season 2013’s many intriguing plot points.

Based on their NAB Cup showing, it’s apparent that intensity and hunger for the contest has been picked up by the younger Cats who have the massive task of assisting mature-aged additions and an aging squad.
The inclusions of Jared Rivers from Melbourne and Hamish McIntosh from North Melbourne suggest that Geelong are by no means settling into a rebuilding phase. But they refuse to rule out what’s on the horizon either, with the acquisition of former Gold Coast top 10 draft pick Josh Caddy, along with more game time for their highly rated youth.

The likes of Steve Johnson, Paul Chapman, Joel Corey, Jimmy Bartel and James Kelly are stars entering the twilight of their careers, but still shouldn’t be written off as their bursts of game-winning magic are written all over the Cats best wins of 2012.

The new question that’s now being asked is, can the new brigade of x-factor handle the load? Allen Christensen, Steven Motlop and Mitch Duncan have all shown the talent and gusto that’s required of successful footballers, but can they sustain it for the Cats to have a say at seasons end?

In an era of zones and extremely complicated running patterns, the rise of Tom Hawkins as a key forward in a game that often doesn’t cater to them anymore, makes him Geelong’s biggest weapon.

Hawkins kicked 62 goals last season (averaged 2.8 a game) and clunked 144 marks (averaged 6.6 a game) in a manner which saw him steal and influence games on his own individual brilliance. Notably, his performances against quality opposition (six goals versus Hawthorn in round 17, four goals versus Sydney in round 23 and four goals against Fremantle in round one) suggest he’s no flat track bully either.

The 24-year-old is a key member of Geelong’s structure even when he fails to score. Starting at centre-half-forward and leading up the ground, he allows his key forward companion James Podsiadly to sit isolated in the goal square with plenty of room to work.

Hawkins demands the opposition’s best defender, allowing the Cats forward line to operate in more space and maximises their chance of scoring.

Circle it on the calendar: Round 21 vs. West Coast Eagles

The first many do when looking at the Cats fixture for a new season is for when they play Hawthorn. No doubt, the round one and round 15 games are important in the context of the rivalry and fight for the top eight, but interstate is where the Cats need to look.

In 2012, Geelong won twice out of Victoria. Both these games were in Queensland with less than impressive outings against the Suns and the Lions where they grinded out victories against lowly opponents.

Games against the Crows and Swans interstate in 2012 were in danger of being over by half-time, and the game against the Eagles was lost after leading at every change. If the Cats want to play finals, they must arrest their record against quality sides interstate.

Sides of finals quality do one thing very well: pressure.

In 2012, Geelong finished ranked second overall for tackles, 12th in handballs against and 16th in tackles against. The ability to constrict the run and carry of the opposition, and turn it into a counter attack was flawless at times. It brought them two big scalps (the Hawks twice and Swans), and got them into a position to play finals.

Keep up the high standard, and the Cats will feature in September once more.

Ben Cuzzupe is studying an undergraduate Arts/Journalism degree at La Trobe. He is also the executive producer/presenter at @BoundForGloryFM. You can follow him on Twitter: @BenCuzzupe