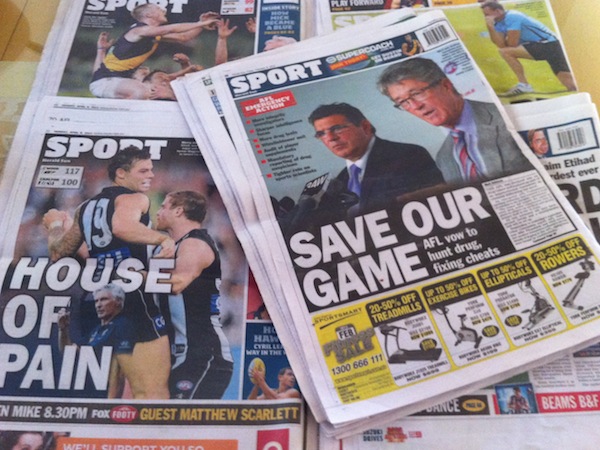 Flip through the back pages of any Melbourne newspaper and you’ll get a sense of the excessive amounts of AFL coverage to which daily readers are exposed.

AFL news is not always limited to the back pages either. Trivial matters and misdemeanors involving these athletes, who are placed so highly upon the Australian sport pedestal, are flung in to the front pages before even the most newsworthy of news.

Some real concerns out of Tigerland. I believe Ivan Maric was getting haircut on magnificent mullet last night. Hope he kept it long at back

It’s difficult to understand why our daily news is filled with so much AFL coverage. It feels like media organisations around Victoria think AFL – a game rarely played outside Australia – is the only sport that exists.

Generations of sports journalists are being trained to report only on AFL, a ‘specialist’ area that is already overcrowded with former and current football players, “experts”, and every man and woman in between.

Some quick research into a training organisation for sports journalists reveals 70 per cent of assessment tasks and coursework are related to AFL – a significant proportion considering the extensive number of other sports played in Victoria. Such insistence perpetuates and reinforces the public perception that AFL is the only sport worthy of media attention, and by extension, sponsorship dollars.

While this number seems excessive in itself, it doesn’t account for all the additional mentions in the front sections of the paper – the drug scandals; the marriage scandals; the drink driving charges.

As a staff member at the Collingwood Football Club said, “they report on such mundane matters that leave you bored after reading the headline.”

Three weeks ago, two Victorian women won gold and silver in the ISSF Shotgun World Cup event in Al Ain (UAE). Despite breaking a world record and defeating the reigning Olympic champion, their feats failed to make headlines. If shooting attracted the same coverage as the AFL, Laetisha Scanlan and Catherine Skinner would be household names.

When asked why AFL receives so much coverage, we collectively tend to lean on the, “footy sells and other sports don’t,” argument. While this attitude seems to be the norm amongst sports journalists, it’s one worth contesting.

Despite AFL being independently funded, in 2012-2013 it received $1,160,000 in funding from the Australian Sports Commission (ASC). Comparatively, shooting – a sport that has produced some of Australia’s most successful Olympians – received $1,936,000. The majority of that was dedicated to the high performance sector.

Shooting, unlike the AFL, depends on the ASC to provide funding to ensure the sport remains sustainable. Although funding is not solely the result of media coverage, the media can undoubtedly have a direct effect on this. Media coverage generates interest, which in turn increases participation rates.

If the Australian media provided lesser-known sports with the coverage they deserved, these sports would grow, through what is essentially free advertising and positive indoctrination. The ASC would then increase funding to these sports, helping them to reach even greater heights on an international level.

To complete the cycle, increased interest would mean that unlike the previously mentioned belief “other sports don’t sell”, media organisations would actually benefit from a more balanced representation of sport in the media.

At present, the participation rates of AFL in Australia make up 3.3 per cent of all Australian’s playing sport. The rates of cycling (11.9 per cent), netball (3.7 per cent) and basketball (3.5 per cent) all trump this figure, yet are not a daily feature in the media.

These sports have produced some of Australia’s greatest athletes, who have been unfairly denied the opportunity to truly etch their names into Australian sporting history. The media must recognise this and aim to provide fairer coverage and representation of sport in Australia.

The superfluous importance placed on AFL is a fallacious cycle that will only be broken by journalists willing to broaden their profession. In doing so, they’ll desensitise some of the coverage surrounding AFL to leave more room in the back pages for other sporting achievements.

Universities and training organisations must also aid in the rectification of this issue, by allowing trainee journalists to effectively utilise their aptitudes by reporting on a diverse range of different sports.