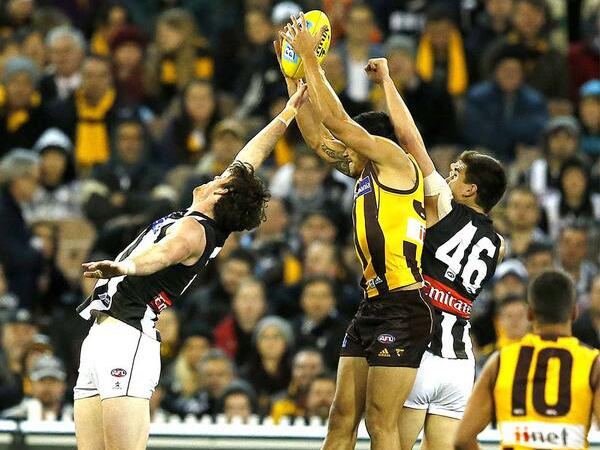 In this edition of the AFL True Ladder, Essendon moves to seventh as its season continues to spiral downward. Brisbane is the big winner on the other hand, jumping up to 11th despite sacking coach Michael Voss mid-week.

Hawthorn proved it is still the premiership favourite with a convincing win over Collingwood on Friday night. The Hawks are setting their team up before the finals begin with Lance Franklin, Luke Hodge and Grant Birchall returning to the side and showing good form.

Once again Kurt Tippett fired for the Swans as they cruised to a comfortable victory. Sydney has locked in a top four finish and has a chance to host a qualifying final when it travels to Geelong this weekend. Simonds Stadium is one of the toughest away trips in the AFL, where Geelong has won 40 of its past 41 matches. The only team it has lost to is Sydney.

Geelong sowed up a top four finish with an impressive display against West Coast on Saturday night. Its defensive pressure was relentless, holding the Eagles to only six goals. Leading in to the finals it was important for midfielder Allen Christensen to show some good form, while Steve Johnson racked up an impressive 37 possessions. Geelong has the chance to move back to second position on this ladder when it hosts Sydney on Saturday.

Fremantle took care of Melbourne on Sunday, but it came at a price. Injury prone ruckman Aaron Sandilands appeared to be concussed and Hayden Ballantyne will have a possible shoulder injury assessed during the week. The Dockers will hope to continue their good form though when they host the Power on Saturday night.

In its previous four meetings with Hawthorn, Collingwood had conceded an average of 138.8 points. While it didn’t give away that many points this time, the Pies showed an inability to defend against the Hawks, causing questions about whether Ben Reid really services the Pies up front, or whether they need him more in the backline.

Any talk of Richmond pushing for a top four spot has ended after its loss to Carlton on Saturday afternoon. The Tigers began the game with relative ease, attacking the corridor at will and dominating the Blues early. As the game wore on, Richmond was forced to play around the boundary which really hurt its efficiency.

The wheels have fallen off. Four losses in a row means that Essendon is literally limping towards the finals, with midfielder Dyson Heppell going down with a foot injury. Much like the last few seasons Essendon looks sluggish and is being beaten all over the ground.

After the Suns gave them a fright in the third quarter, the Power steadied to hold on for victory. Port Adelaide is now two games clear of Carlton in eighth spot, but isn’t safe yet. It faces Fremantle, in Perth on Saturday, and a tantalising match up with Carlton in the final round.

Carlton kept its slim finals chances alive with an impressive victory against Richmond on Saturday. The Blues were slow out of the blocks, trailing by 30 points at quarter time, but they displayed the defensive intensity that many fans expected to see, all year, to get back in the game. Carlton needs to defeat Essendon on Saturday and hope Port Adelaide loses to remain in the finals hunt.

With another powerful performance at Etihad Stadium, the Kangaroos again showed how good they can be. Despite an interchange infringement, North played with high energy and took the game away from Essendon in the third quarter. North Melbourne meets Hawthorn in round 22 in what promises to be an exciting contest.

After what new coach Mark Harvey described as ‘a difficult week’, the Lions came out and took care of business on Saturday night. With club veteran Simon Black putting on another classic performance, Brisbane cruised to an easy victory. Brisbane will be looking to notch up its 10th win on Sunday when it hosts the Western Bulldogs.

Adelaide was overrun in the final term on Sunday suffering a disappointing loss to the Western Bulldogs. The Crows couldn’t stop the Bulldogs from scoring in what was an entertaining shoot-out. Adelaide will hope to bounce back when it faces Melbourne on Saturday.

West Coast put in one of its worst performances of the season on Saturday night against Geelong. The Eagles were jumped early and were made to look second rate by the Cats. West Coast now travels to Melbourne to meet Collingwood on Friday night.

The Bulldogs continued their late season resurgence with an entertaining victory over the Crows on Sunday. After trailing by 22 points in the third quarter, the Western Bulldogs fought back to take a memorable win with a seven goal final term. Tory Dickson was excellent up forward bagging six goals for the Dogs.

For the first time since 2010, Gary Ablett played his third consecutive game collecting under 30 disposals, yet Gold Coast almost pulled off a terrific victory on Saturday. Led by Harley Bennell, the Suns pushed the Power to the limit during an impressive third quarter, but fell away later in the contest.

The Saints suffered another disappointing loss on Sunday against the Swans. St Kilda was matching it with the reigning premiers early, but fell off the pace to be beaten comfortably. Jack Steven led the way for the Saints, adding to his impressive season. He looks to be a young star in the making.

After appearing competitive early in the match, Melbourne fell off the pace again and suffered another big loss. Jack Viney was a positive for Melbourne, collecting 28 possessions. Possibly the biggest issue to come from the weekend for the Demons is an injury scare for future forward Jesse Hogan in the VFL.

Despite another loss, the Giants had some shining lights on Saturday night. Youngsters Stephen Coniglio, Adam Treloar and Toby Greene all played terrific games, giving Giants fans plenty to look forward to in the coming years.

Josh Barnes is a first-year Bachelor of Journalism (Sport) student at La Trobe University. You can follow him on Twitter: @barnseyy