Alex Keath is living out his boyhood dream, just not with the code he expected. 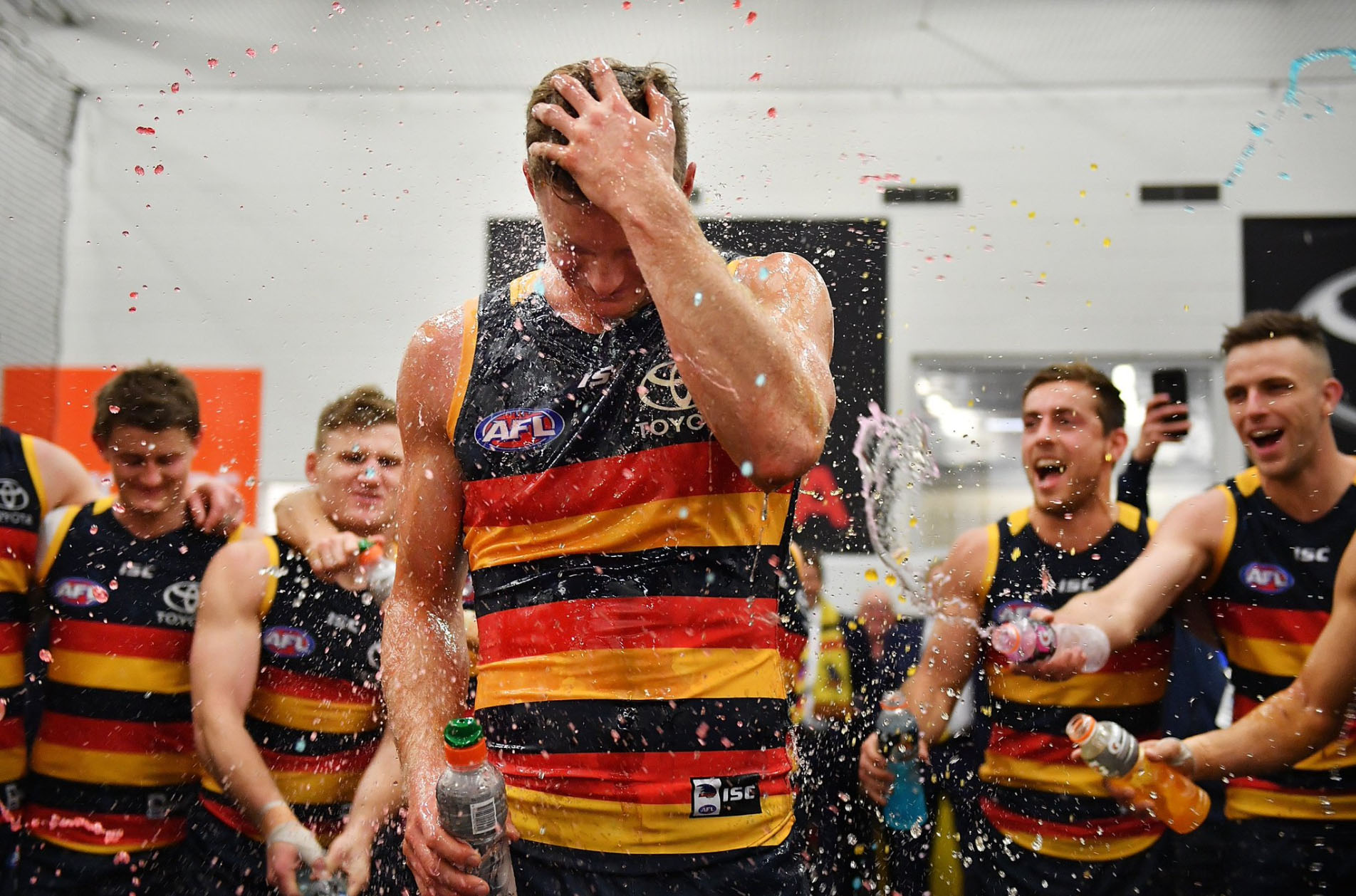 The knot in his stomach tightened as the siren blasted, the cauldron of Crows fans rose as one, and the Sherrin left the umpires hand.

Within twenty seconds the Crows had hit the scoreboard with an opportunistic snap from Josh Jenkins that saw Adelaide scratch the score sheet for the first time in Keath’s AFL debut.

As the ball was carried back to the centre, Keath bumped into Tom Hawkins as they jostled for position.

This was not the first time the pair had clashed on a sporting field. Nine years ago, they faced off in a charity cricket match, before the pair took very different paths in their sporting careers.

Growing up, Keath jumped at any opportunity to compete on the sporting field.

“I played cricket and basketball from an early age and it wasn’t until I was around twelve or thirteen years [old] that I settled on playing cricket in the summer and football in the winter,” Keath told upstart.

While he originally saw sport as more of a hobby than career, Keath’s performances were catching the eye of scouts.

He made the state representative teams for both AFL and cricket and was faced with a momentous decision that he would ponder for the next eight years.

The newly fledged Gold Coast Suns were so optimistic about Keath’s football potential that they signed him as the final eligible player in their seventeen-year-old selection.

It appeared as though an AFL career beckoned, until the Victorian Bushrangers offered Keath a three-year senior contract.

While Keath said it was an incredibly “difficult” decision to make, the offer from the Bushrangers was the final move that pulled cricket over the line.

With that, Keath’s contract with the Suns met the shredding machine and his potential AFL career was put on hold.

Keath turned heads on his Bushrangers debut, notching up 46 with the bat against a quality English side.

Unfortunately for Keath, his promising debut was soon forgotten as he struggled to cement his place in the Victorian side.

He would go on to play just seven-first class games for the Bushrangers and ended up heading overseas in a last-ditch attempt to revive his spluttering career.

He played in the Birmingham Premier League on English soil, before a stint with the Melbourne Stars in the Big Bash League (BBL).

At the end of the 2015 season, Keath found himself without a Cricket Victoria contract and at a crossroads in his professional sporting career.

He barely scraped on to the Adelaide Strikers BBL list.

Keath knew his time in cricket was coming to a close. “The writing was on the wall and I needed a fresh challenge,” Keath said.

After being pursued by 14 AFL clubs over his cricket career, Keath eventually signed as a ‘Category-B’ rookie with the Adelaide Crows.

Just like that, the final chapter of Keath’s cricketing career had been penned.

Keath’s dream was to represent Australia in test cricket. Although he didn’t get to fulfill his wishes, he is incredibly grateful for the experiences given to him by his cricket career.

“I like to focus on what I did achieve and winning an Under-19 World Cup and playing first class cricket for Victoria with some great players are my fondest memories.”

With his cricketing career behind him, Keath threw himself into training and was immediately overwhelmed by the intensity of AFL-level football.

“The way the players prepare themselves and back up week after week in the AFL is phenomenal. I had to work particularly hard on my strength and conditioning.”

His contract with the Adelaide Strikers limited his pre-season with the Crows, but it didn’t stop Keath from securing his SANFL debut against Glenelg in April 2016.

It was the first game of football Keath had played since he broke his collarbone in a Year 12 school match.

Keath trudged off the ground having collected fifteen disposals and a game-high six rebound 50’s to help set up the Crows thirty-point victory.

He would go on to play thirteen games in his maiden SANFL season, before succumbing to a niggling back injury.

Keath entered the 2017 season with a deadline. He had one year left on his rookie contract with the Crows, meaning one season left to show Adelaide why he deserved a second contract.

Despite battling a hamstring injury throughout the pre-season, Keath continued to impress at SANFL level and was eventually named co-captain of the Crows team alongside fellow code-hopper Hugh Greenwood.

Then a door was opened and an opportunity presented. Injuries to Jake Lever and Kyle Hartigan left the Crows in desperate need of a key defender.

He described the moment he learnt of his debut as “pure excitement” mixed with “a lot of nerves”.

“I couldn’t have asked for a better game to debut in. I want to play and perform in big games, so I was really looking forward to it.”

Even though many of the 50,000 spectators filtering into Adelaide Oval had their eyes fixed on former Crows star Patrick Dangerfield, Keath felt as if the microscope of the AFL world was on him.

The butterflies began to settle for him after his first one-on-one contest as he slowly learnt to find his feet at AFL level.

Keath has now played five games of AFL football and is looking to cement his place in the side as finals approach.

As they did on the night of his debut, the Crows sit atop the AFL ladder and are heavily fancied to feature deep into the September action.

While Keath may have closed the chapter on one sporting career, he is now part of a rare club of players that have the opportunity to pen another in a different code.

With the ink still fresh on Keath’s latest chapter, his first five games have provided a glimpse of the potential the Gold Coast Suns saw all those years ago.

While his dream of wearing the baggy green on the MCG is over, he could yet find himself on the hallowed turf on the last Saturday in September.

When asked whether he had any regrets about his decision to jump codes, Keath gave a succinct answer.

A complete straight bat. Almost as though he has played cricket before.