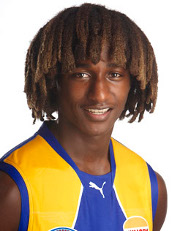 On Monday, the 2012 All-Australian team was announced, with West Coast veteran Darren Glass named captain of the team.  Discussion starts as soon as the full-back line is named.

And while selectors have their reasons, and the fans also have theirs, either way, it’s always a tough job to cut the AFL’s best 40 players down to 22.

Nic Naitanui was one of the surprise selections, named as the number one ruckman for the All-Australian team. His versatility was definitely a factor in his selection, but was he the best ruckman?

But if you think about it, he’s only 22 years old, and it makes me think, what if we had an Under-23 All Australian Squad? We already have a Rising Star Award, but who would be this year’s best 22 youngsters? It would be a coach’s dream to take charge of the competition’s most promising players.

Ellis had an impressive debut year for the Tigers, exemplifying a high skill level for a running defender. Talia was named this year’s Rising Star, playing on the best key forwards in the competition, while Heppell was the 2010 recipient, and backed up last year with another solid season.

Toby Greene is arguably the most promising kid in this team, and is still just 18 years old. He averaged 28 disposals a game for GWS this year. Schoenmakers played key back for Hawthorn this year, and everyone forgets he is only 21 years old. I rate his season higher than most, due to the fact Hawthorn finished on top of the ladder. And Atley has taken his game to another level, after a slow debut season in 2011. Atley shows plenty of dash and skill, and his new role off the half-back-flank is to thank.

Steele Sidebottom is a class act for Collingwood, and had four 30+ possession games across a five-week period this year, finishing with an average of 27 touches a game. Ward, at 22 years old, is one of the youngest captains in the AFL, and averaged 24 touches with the Giants this year. Cotchin had an outstanding year and will be competitive on Bronwlow medal night. He is every chance to take over Richmond’s captaincy in 2013, averaging 27 touches a game across 2012.

Collingwood’s Dayne Beams has had an outstanding year, and was named on the All-Australian wing on Monday, but I’ll pick him up forward. But with an average 31 touches a game, and 27 goals to his name, his impact in front of goal is vital for the Pies. Jack Darling is my centre-half-forward, with 53 goals this year, six of those in finals. Off-field indiscretions meant he didn’t get drafted until pick 26 in the 2010 draft; there are a lot of clubs that I’m sure are regretting not picking up the key forward. Jack Gunston has been the surprise packet of the year for Hawthorn, after making the move from the Crows. He has kicked 35 goals, and been vital as a versatile forward for the Hawks.

Gunston’s teammate Luke Breust kicked 41 goals, and takes my spot in the forward pocket. It’s outstanding to think the 21-year-old sits equal second with Jarrod Roughhead on Hawthorn’s goal tally. Sam Reid takes my full-forward position, with 30 goals for the Hawks. He has a tough gig as the lone tall in the Swans’ forward line. And Taylor Walker walks in to the other forward pocket. The match winner has kicked 59 goals this year, including five goals in last week’s semi final.

Nic Naitanui holds his All-Australian spot as my number one ruckman. He had 543 hit outs this season, and kicked 24 goals. Patrick Dangerfield is one of the most exciting young midfielders in the competition, although named as All-Australian half-forward-flank. Despite kicking 23 goals for the year, the stocky onballer averaged 26 touches a week. And Scott Selwood takes the tagger role in my midfield, although the 22-year-old knows how to find his own ball also, the youngest of the Selwood brothers averaged 25 possessions a game this season.

For my interchange, I’ve gone with speedy winger Harley Bennell, his season has been under-rated and overlooked, and it’s easy to do when he plays at the Gold Coast and Gary Ablett is stealing the limelight. Bennell averaged 24 touches a game and kicked 25 goals for the year. Jack Redden from the Lions gets the second spot, with just under 25 touches a game and a staggering 142 tackles for the season, nearly 40 more than any other teammate. And Rory Sloane has been a standout for the Crows this season, averaging 22 touches a game.

Dustin Martin gets my green vest, with such versatility, he can play off the half-back flank, just like Shaun Atley. He can go into the midfield, where he averaged 22 touches a game, or, as the 23-goal season suggests, he can play as a forward. With one year less experience than Dayne Beams, expect Martin to take a similar step in 2013.

I’m sure there are players that I have left out that many might disagree with. But it just shows even the All-Australian selectors can’t get it right.

In the end, it simply comes down to opinion.