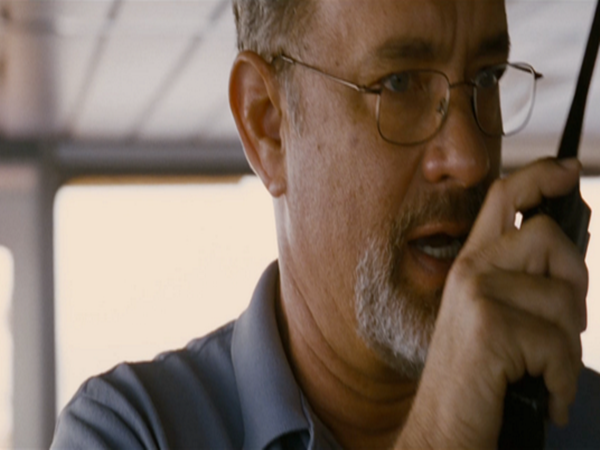 Captain Phillips isn’t a story of the evil Somali pirates that dared to hijack a shipping vessel, and it isn’t a detailed account of the brave ship’s captain that stood in their way.

The beauty in this attempted “real world” portrayal is it reflects the shades of grey that exist around the edges of society.

Director Paul Greengrass, utilising his background as a journalist and documentarian, lends perspective to the events that transpired in 2009. Although the scenes in the Somali village of Eyl are brief, in comparison to the movie’s two-plus-hour running time, they add another dimension to a familiar story.

A brief exchange between captor and captive tears apart popular cinematic conventions to reveal something bigger than the two people on screen.

The two are mere cogs in a larger system – a political, cultural and economic system inevitably clashing off the horn of Africa.

Head over to Reddit for a live AMA with @TomHanks. #CaptainPhillips pic.twitter.com/OGD48NSNUR

Newcomer Barkhad Abdi proves more than a match for two time Oscar winner Hanks. Abdi gives weight to every look. His steely gaze exudes an inner desperation and determination none of us could understand or relate to. His bony face betrays an intimate knowledge of poverty which contrasts well against the fuller, more rounded face of Hanks.

Not to be outdone, Hanks turns in a vintage performance. We haven’t seen him this determined since Philadelphia or this desperate since Cast Away. He doesn’t present Phillips as a hero, rather a man fuelled by the duty of protecting his crew and the prospect of seeing his family again.

Adapted by Billy Ray (The Hunger Games) from Phillips’s own memoir of the events (A Captain’s Duty: Somali Pirates, Navy SEALS, and Dangerous Days at Sea) the script builds the tension early and quickly.

Cinematographer Barry Ackroyd infuses the scenes on the Maersk Alabama with a documentary feel that brings about a sense of realism and immediacy carried throughout the movie, even when the camera isn’t right in someone’s face.

And later, when the scenes shift to the smaller lifeboat, Ackroyd manages an intimacy that feels almost claustrophobic.

Coupled with some tight editing, Greengrass has translated the tension in the script into something visceral on screen.

The movie reaches its apex at the very end in a scene, rarely filmed, between mission accomplished and happily ever after.

It is in this unscripted and last-minute scene Hanks conveys the toll these events have taken on the human spirit.

Filmed aboard the USS Bainbridge with actual crewmen, the mesmerising sequence allows us a glimpse of what it is to be truly vulnerable.

While crewmembers of the Maersk Alabama currently contest the events depicted in the movie and in Phillips’s memoir, what can’t be denied is that Paul Greengrass has woven a thrilling and compelling story. And while its source material is in question, the movie certainly swings as close to realistic as possible.

Rameez Abdeen is an upstart contributor and third-year Bachelor of Journalism student at La Trobe University. You can follow  him  on  Twitter.