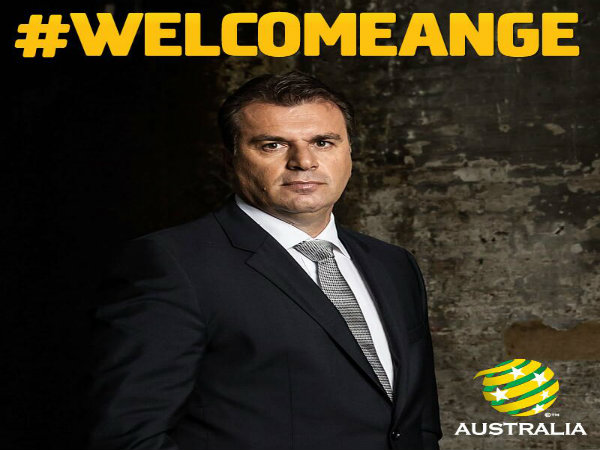 The appointment of Ange Postecoglou as the new Socceroos coach is all about challenges: challenges for the players, the coach, the A-League and Football Federation Australia.

His appointment confronts all of these head on. This is a line-in-the-sand moment and a move by the FFA that is two years overdue.

Postecoglou – who’ll begin his five-year contract at the helm of the Socceroos on Monday – is a proven domestic coach who places a strong player-coach relationship at a premium.

Complicating the task ahead is Postecoglou’s short term objectives versus his long term goals.

The specific question is how he can respectfully transition an ageing team before, during and after Brazil, while creating a winning and competitive culture for other international tournaments.

It’s a task which proved too difficult for Holger Osieck and Pim Verbeek, but one which is unlikely to daunt the 48-year-old.

“The team does need regenerating. In any sport it’s very difficult to replace champions,” Postecoglou told a packed media room following his appointment.

He’s right in one respect, as the Socceroos are well past their best years of 2006-2010. But with the structures FFA now has in place, mixed with improved coaching and an increasingly prominent A-League, who is to say there isn’t another Tim Cahill running around in the parks of Parramatta, or a stronger, quicker, taller Lucas Neill learning his craft on the northern beaches of Sydney?

These players are pioneers and were central components of the first world-class batch of players this country has ever seen, but they are by no means unsurpassable and shouldn’t be seen as irreplaceable.

It’s Postecoglou’s challenge to find the next generation, inject them into the national setup, and nurture them towards Russia 2018.

And it’s the FFA’s challenge to provide Postecoglou and his coaching staff with the resources to do so.

Before he can worry about becoming a world-class outfit on the pitch, the 46-year-old yesterday directed his attention to the off-field structures and processes. Only when this component is rock solid, is when any meaningful and consistent improvement on the field can be expected, he claimed.

Postecoglou must set the bar high in the long-term, but lower it for Brazil. It’s a conundrum that will be difficult to orchestrate, but is ultimately geared towards a successful 2018 World Cup campaign.

His five-year contract is not just a show of good faith from FFA chairman Frank Lowy and CEO David Gallop, but also an acceptance of the need to rebuild.

The average age of the Socceroos’ most accomplished players – Schwarzer, Neill, Bresciano, Kewell, Emerton and Cahill – is 35. Brazil will be one final tilt for these green and gold stalwarts, but it’s unlikely all of them deserve to be in the Socceroos best 11. Approaching this delicate issue with caution cannot be confused with trepidation.

Postecoglou, as both a fan and national coach-in-waiting, has seen how things have unravelled in recent years – culminating in two successive 6-0 losses in the space of 10 days earlier this month.

But aside from the tokenism of player retirement gestures and the outcome of next year’s World Cup, Postecoglou must decide what brand of football he wishes to impart the Australian team with.

No longer will he have the luxury of daily training sessions to fine-tune intricate set plays and clever ball movement which were the hallmarks of his time in the A-League. Instead, his role will be far more about selection, retention and finding the right formula – almost like a speedy crash course to coaching without the months of pre-season or hours of team meetings.

He’s experienced the international cauldron before, if only at an under-20 level. But his attacking ethos will likely provide a breath of fresh air to a team gasping for oxygen.

His four national title-winning sides have never been afraid to play from the back. Long balls and hopeful crosses were seen by Postecoglou as last resorts. Whether this aggressive style survives in the international arena – with limited preparation – remains to be seen.

What he cannot forget is the reason he has the job at all. It’s his style that has proven successful, and it’s led him to the highest international honour he wished for.

His Brisbane Roar side went 36 games without defeat – a record that surpassed all of Australia’s football codes. The Roar achieved this not through steadfast defence or negative, suffocating tactical manoeuvres.  Rather it was an insatiable appetite for goals that allowed Postecoglou’s team to impart pressure on their opposition.

If he can replicate this style on the international stage, then Australian fans are in for a treat over the next five years.

It’s going to be a challenge, but Postecoglou has earned the right to let the next half-decade play out on his terms.

Tom Morris is a third year Bachelor of Journalism (Sport) student at La Trobe University. You can follow him on Twitter: @tommorris32.