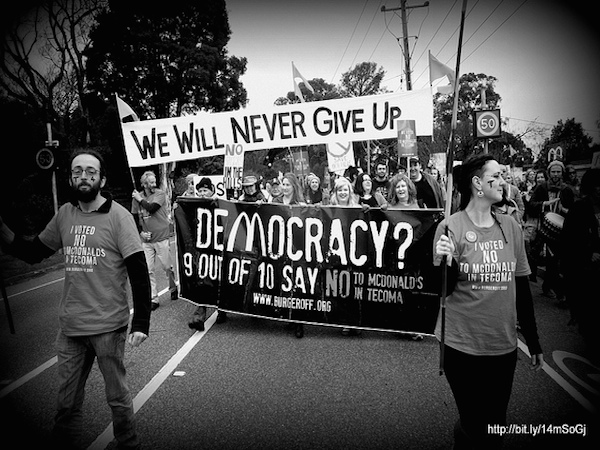 Controversial changes made to the Summary Offences Act, referred to as ‘move on laws’, come into effect on September 1. But what does this mean for Victorians?

The Act, passed through the Victorian parliament in March, gave police and protective services officers (PSOs) new powers to move on anyone who is publicly protesting, demonstrating or picketing.

The law expands on an original Act, which was designed to give police and PSOs the power to move on drunk and disorderly people. The amendments specify that protesters may be given a move on order if they are blocking access to a building, impeding traffic, causing obstruction to an individual, or creating a reasonable fear of violence in others.

Failure to comply with orders may result in harsh new penalties, including arrest, a $721 fine, and an exclusion order banning an individual from entering that space for up to a year. Furthermore, penalties may be given on the basis of what a police or PSO officer believes a person might do, rather than on what they have done.

Spokesperson for the No McDonald’s in the Dandenong Ranges campaign, Garry Muratore, said they have effectively turned police into judge and jury.

The protests in Tecoma against a McDonalds being built in the community. Source: Flickr; michaelpickard

“The laws were adequate because if someone decided to break the law the police can make an arrest. Under the new laws police don’t need that to happen. They can just say we think you’re going to break the law,” Mr Muratore said.

It is often mistakenly believed that the right to free speech is protected in Australia, however, there is no such guarantee in the Constitution, and the same issue applies to the right to protest.

So, although the Act does not specifically ban protesting or demonstrating, it does create ample opportunity for police and PSOs to shut protests down, no matter how peaceful, based on what police and PSOs think someone might do.

The Act also contradicts the Universal Declaration of Human Rights. The Declaration states the right to peaceful assembly, and while it is not a legally binding document, it does lay out the fundamental values of democratic societies.

“We have an enormous amount of concern. Up until now all our activities have tried to be creative, peaceful, funny.”

The ongoing protests in Tecoma gained international attention due to their ongoing efforts to halt the construction of McDonald’s in their town.

Prior to the protests, the Shire of Yarra Ranges council met and unanimously rejected the proposed development. Around 650 residents concerned about the development also attended the meeting.

The Victorian Civil Administrative Tribunal then overruled the decision, ruling that the objections of the community were “irrelevant”. Peaceful protests have been conducted since that 2011 decision, giving the community a voice on the issue.

“Our concern is with how much pressure McDonald’s can put on the police. We had a girl, a student, trespass and police brought 80 riot squad members to remove her, and that was at the urging of McDonald’s,” Mr Muratore said.

Another example of the laws interfering with the right to protest is the nationwide “Lock the Gate” campaign.

“The new laws are not democratic at all,” says Mr Muratore.

“The local police officer can be a guy just out of police academy, and he can make a decision on the spot about what you are thinking. There is no democracy in that. It’s just the issue of a fine and away you go. How are they going to use these laws? Are they going to give me a call at home and say, ‘We think you’re going to go and do something so we’re just going to fine you now’?”

However, as Mr Muratore points out, these laws may not be in effect for long.

“The Greens and Labor party have come out and said they will repeal the law immediately if elected in November so I have hope that these laws will be a blip.”

Jessie Anne Gartlan is a Bachelor of Journalism student at La Trobe University. Follow her on Twitter: @jessieanne08