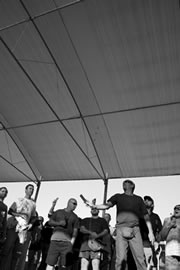 Anzac Day in Alice Springs begins with a pre-dawn ascent of Anzac Hill. Centrally located in the town, the hill serves as an Anzac memorial and also as a lookout from where one can observe the town and its surroundings.

I chose to follow a school principal and his attendance at the dawn service and mid-morning march. He’s a man who came close to being conscripted for Vietnam and, having parents and grandparents who were heavily involved in both World Wars, he believes it’s essential to educate the younger generation about the sacrifices that have been made by so man.  He rallies his troops (the students) who participate in the march each year and are involved in the Anzac Day ceremonies.

In addition to this narrative, I attempted to give some insight into what other people find important on the day and have presented a concurrent narrative.

James Tudor is in his first year in La Trobe University’s photojournalism course, and is studying online from Alice Springs.