One studio is helping marginalised youth reconnect with the community 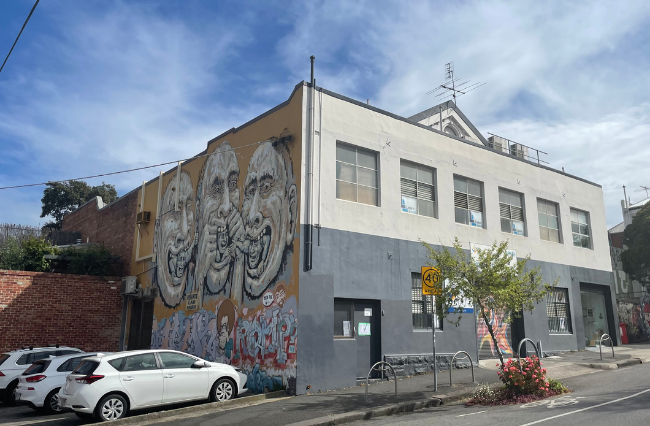 Resting beside a narrow laneway with graffiti tattooing both sides of the building, the arts studio welcomes participants into a tight-knit community of artists and practitioners. Inside, canvases and houseplants decorate the rooms. Glass windows separate a kitchen and workspace. The same room morphs into a dining area, creating a space for young people to engage in visual arts, ceramics and music while also building connections.

The Artful Dodgers studio in Collingwood has been running as a cultural development program since 1996 for marginalised youth in the community. The project is run by Jesuit Social Services (JSS) and aims to help young people with complex needs to re-engage with society. This includes people between the age of 16 and 26 who have been diagnosed with mental health illnesses, have had a history of substance abuse, have a refugee background and also individuals recently released from prison.

Halszka Masash, a multimedia artist and social worker, says that the the studio is just as much about building friendships as it is about developing artists. Many of the participants lack the basic support of family, school or employment. The program at Artful Dodgers studio works to fill some of those voids, providing a support network where people can seek help and work in an unhurried environment.

“A lot of the people I work with don’t create art [and] they don’t have any interest in music. They just need connections,” she tells upstart.

“A lot of the time we play more [of a role] as a family than an arts space.”

The fluid environment around the studio has been its success story for nearly 25 years, having clear objectives and two unique approaches in social work to help the people who come into the program.

Artful Dodgers uses a horizontal approach to focus on an individual’s artistic potential. This approach aims to help participants invest time in exploring their creative capabilities within the studio. People have access to music production, broadcast and other forms of art allowing participants to explore their unique artistic capabilities. Artful Dodgers’ music, ceramics and visual arts programs allow people to experiment with different forms of art in an unhurried and artistic environment. Attendees often begin their involvement with the program in the studio, collaborating with other artists and discovering both individual and artistic potential.

Elijah Augustine, a presenter for 1503AM Kool and Deadly Radio, says that he barely spoke a word before visiting Artful Dodgers in 2017. His involvement with its music programs had helped him come out of his shell and open career opportunities in radio and music production. His long-term relationship with the program saw him go from someone who needed help, to becoming one of the studio’s mentors. This had led him to win the inaugural 2018 Darebin Emerging Young Community Leader award.

“[In] my early days I didn’t talk as much and then later in the year, I started to know everyone. Years had gone by and the relationships started to open and I started to socialise with everyone,” he tells upstart.

Artful Dodger’s artist and practitioner Jason Penfold says that a unique aspect of the program is that they take an individualised approach to their participants, only working with a small number of people at a time.

“It’s not like there’s a set program for what we do every single day. Our approach is really flexible to the needs of the young people because everyone is individual … we’re quite reactive to how the people want to work,” he tells upstart.

The studio’s vertical approach seeks to present people’s artistic outcomes to an external audience, encouraging participants to “meet both personal and artistic challenges, by engaging in collective art-making, which results in a public outcome”. This approach brings the skills that participants have developed to a wider audience. It’s often used in the later stages of the program and aims to reposition young people back into mainstream life. Emerging artists coming through Artful Dodgers have the chance to present their work in exhibitions organised by JSS, while musicians can take part in the monthly megaphone concerts.

Australian music legend Paulie Stewart helps run the studio’s megaphone concerts. He says it’s a great opportunity for participants to perform their original music in front of a crowd.

“The megaphone concert is something people really look forward to because you get a good feed, [see] new entertainment and it doesn’t cost you a brass razoo,” he tells upstart.

While participants are expected to transition back into mainstream life, the relationships and strong connections people have formed from the studio’s community still lives on. Young people who have come through the program are still facing many challenges such as housing, employment and social isolation. Artful Dodgers never stops providing pathways and promoting social development, as the longevity of the program ensures continuous support for people who may need a community to lean on.

Penfold appreciates working at the studio because he can be “the person that [he] didn’t have when [he] was their age” and also the deep meaningful connections he has developed with the people from the program.

“I always say the studio is the microcosm of the real world because we have so many people coming in and out … it really is a reflection of the outside world.”

Article: Luke Lay is a second-year Bachelor of Media and Communications (Journalism) student at La Trobe University. You can follow him on twitter @Lukelay10.