Australia’s climate change approach is lagging behind, leaving other countries to do the heavy lifting.

Climate experts say that Australia will be playing catch up in the near future.

Australia’s target is one of the lowest set for a developed country.

Critics argue that as a major emitter with a large economy, Australia has not only the ability, but a responsibility to do more.

World leaders will present these targets to the United Nations Climate Summit in Paris later this year.

The goal of the Summit is to agree upon a legally binding global climate agreement to curb carbon emissions. They aim to stop a rise in global temperatures above two degrees celsius, any point above would make the effects of climate change become intolerable.

In the past century, average global temperatures have increased by 0.7°C.

European Union Climate Chief, Miguel Cañete, warned that the world will be unable to meet its goal if talks fail in Paris.

Australia, as well as about another 190 countries, committed to confining a global temperature increase back in 2009.

The Climate Institute’s national policy and research manager, Olivia Kember, tells upstart that under the government’s announced plans, Australia would be doing less than its fair share. 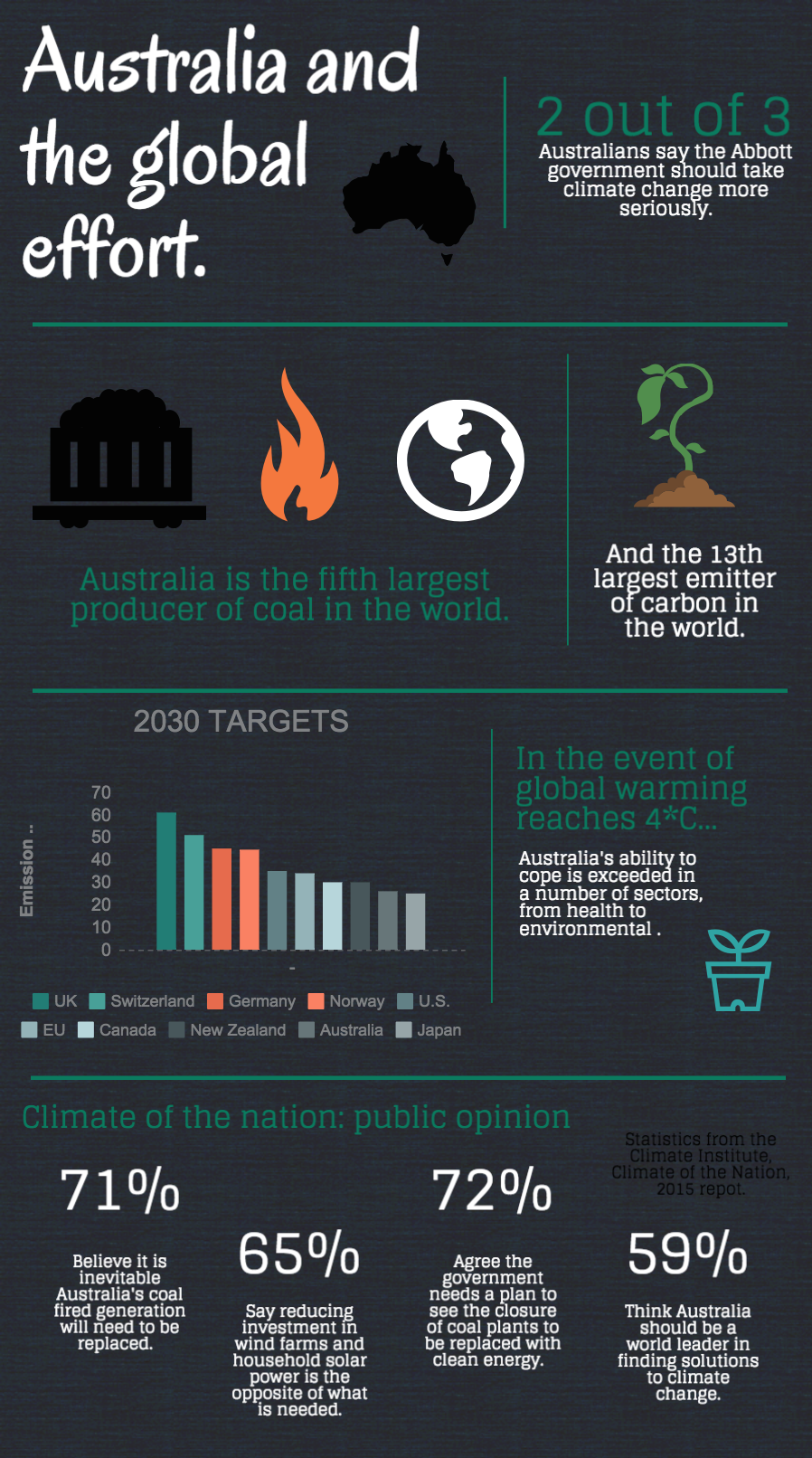 The current emissions targets are expected to cost Australia $4 billion a year.

Abbott has said that higher targets would result in unmanageable costs and that Australia would not jeopardise its economic prosperity for the environment.

The underwhelming target follows the winding back of renewable energy targets earlier this year, along with cuts to funding and investment in both wind and solar energies.

These moves have raised questions as to whether the Abbott government is actually committed to addressing global warming.

Abbott’s controversial position on climate change has been well known since he called climate science “crap” back in 2009.

The PM was also criticised last year after insisting that coal was the future for Australia. This was after the UN called for action on climate change and a move away from fossil fuels.

Abbott is unsure whether he’ll attend the negotiations in Paris this December unless a “significant number of leaders choose to attend”. Foreign Minister, Julie Bishop, will represent Australia.

The Australian public are also unhappy with the government’s lack of action towards combatting climate change.

A report by The Climate Institute found that two in three Australians think the government needs to take climate change more seriously. It also indicated that a failure to do so may result in backlash from voters.

The latest Fairfax-Ipsos poll puts the coalition behind Labor on a two party preferred based at 46 to 54, suggesting that the government is already feeling the effects.

Despite this, Kember says it’s unlikely the government will review the emissions targets before Paris.

She says that even though the current targets are inadequate, hopefully the government will emerge with something more ambitious after the negotiations.

“If every other country were to commit to the same level of emissions as Australia, we would be looking at global warming of between three or four degrees,” Kember says.

The Institute calculated that a fair contribution on Australia’s part would be a reduction in carbon emissions by around 45 per cent by 2025, or 65 per cent by 2030, based on 2005 levels.

“While Australia’s target alone isn’t going to prevent the achievement of the goal, we’re essentially taking a step back while we watch the other countries pedal,” she says.

In a statement released by The Climate Authority, an independent statutory advisory body that Abbott has previously sought to abolish, Chair Bernie Fraser said current targets will see Australia slip further behind the efforts being made by comparable countries.

He said that as a result, the country will face large “catch-up adjustments” down the track.

Australia relies on coal for 70 per cent of its electricity and the transport sector is almost entirely reliant on fossil fuels.

The federal government’s provisional targets would leave Australia one of the most carbon-intensive economies among developed nations, something Kember says is entirely avoidable.

“There’s plenty of evidence [suggesting that] Australia has the ability to make its energy essentially carbon free,” she says.

This is in part thanks to our natural resources and potential in renewables.

However, so long as the government avoids climate change action whilst being reliant on experimental technologies, the opportunity for renewables may begin to fade.

Caitlin is in her third and final year in a Bachelor of Journalism at La Trobe University. You can follow her on Twitter here: @CaitlinMcArthu1.