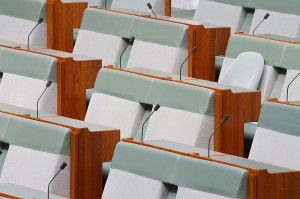 Australian journalism is in trouble. News media ownership is concentrated in too few hands and day after day ‘news’ stories are published that are little more than lobbying on behalf of one side of politics or the other.

The result? A rancorous and hostile political environment in which politicians are almost encouraged to put power struggles ahead of good policy.

La Trobe University’s journalism program can’t change that overnight, but we’re committed to turning out graduates that understand what fourth-estate journalism means and that have the skills to ‘keep the bastards honest’.

Launching the Backbench Insiders project is one step along that road. We asked second-year journalism students to profile backbench MPs to uncover their strengths, weaknesses and their views on public policy.

The shocking result was that many of these MPs wanted to be heard, and wanted to talk to citizens about how they were representing their electorates and the nation. You can read the result via the links below.  The stories were written and edited by second-year students.

However, together they say one thing – the fourth-estate journalists of tomorrow are coming and the old guard better get out of the way.

Here’s a list of the backbenchers we’ve profiled so far.  Please note that for the purposes of this section, we’ve defined a backbencher as anyone who is not a minister or shadow minister (ie anyone not on the frontbench).

4. Wyatt Roy: The ‘little’ boy who could

5. Jamie Briggs: The future of the Liberal Party?

13. Jill Hall: Allowing seniors to show their worth

14. Barry Haase: An enduring commitment to the bush

23. Harry Jenkins: a man of the people

26. Mike Kelly: From soldier to politician

30. Kirsten Livermore: To choose or not to choose Kevin Rudd?

32. Andrew Laming: The Bear Grylls of the backbench?

35. Joel Fitzgibbon: No stranger to controversy

40. Philip Ruddock: Staring down the critics