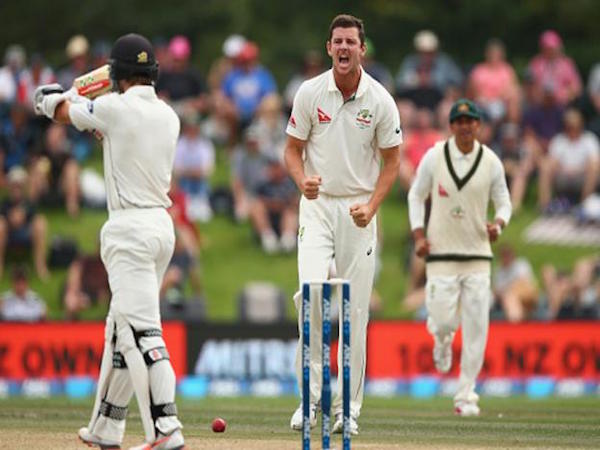 The Australian cricket team’s recent sojourn to New Zealand for the Trans-Tasman Trophy was filled with talking points.

Umpiring decisions across both One-Day International and Test series proved costly for each nation, whilst Brendon McCullum’s final international match proved to be the arena in which the Aussies sealed their ascension back to the top of the Test rankings.

However, despite winning the series convincingly, the manner in which the Australian cricketers conducted themselves on-field throughout the tour has been widely condemned by the public.

As a result of their actions in the morning session of Day Four in the 2nd test, Captain Steve Smith and seamer Josh Hazlewood were fined 30 percent and 15 percent of their match fees, respectively.

In the commotion of a failed Australian review, Hazlewood was heard through the stump microphone saying “who the f*** is the third umpire?”, whilst Smith demonstratively approached umpire Ranmore Martinesz to question the decision.

It is not the first incident in recent times that Australia’s behaviour has landed it in hot water.

During the first test of 2013/14 Ashes series, then Australian captain, Michael Clarke, was heard via the stump microphone telling England’s James Anderson to “get ready for a broken f***ing arm”.

This incident was preceded by the suspension of David Warner in 2013 following a late night altercation with England batsman Joe Root.

Not only does having a national team behaving badly give Australia a bad reputation internationally, it also has the ability to influence young cricketers around Australia.

Just one day after the latest incident in New Zealand, wild scenes erupted at a local youth cricket match.

In the Diamond Valley Cricket Association’s Under-18 semi-final, a batsman was contentiously given out caught down leg side.

The batsman felt he was within his rights to march down the pitch and berate the umpire, before sprinting off the ground and attempting to chase down and fight a supporter who had shouted out to him after approaching the umpire.

President of the North Eltham Wanderers (who were the fielding side when the incident occurred) Brian Stieg says that the behaviour on display could be traced to that of the Australian cricket team.

“I think from a senior level of cricket that people can view on TV, it (the players’ behaviour) is not a good look for juniors because they will see someone have a crack at an umpire and say ‘if they can do it, so can I’,” Stieg tells upstart.

“The Australian players have a bit of a problem – they are serial offenders and it is not a good look… some of them need to pull their heads in.”

On the actions of the player who chased down the opponent, Stieg says that the player will “pay the price for his stupidity via the tribunal”, and that the act was “out of line”.

Stieg’s message is very clear: everyone is responsible for his or her own actions on the cricket field and although the junior player in question was irresponsible, the Australian players are not setting the right example on field.

Stieg suggests that if the conduct of our national cricketers does not improve, the behaviour of cricketers at both ends of the spectrum has the potential to spiral out of control.

“Once the behaviour gets out of control, there is no getting it back,” he warns.

“There’s a code of behaviour and we all need to stand by it.”

Connor O’Leary is a third-year sport journalism student at La Trobe University. You can follow him on Twitter @connoroleary_