Jack Gramski, a 23-year-old folk singer from Werribee, sits in front of the stage on which he is soon to perform. His hands twitch; constantly fiddling with his lighter, while his foot taps fiercely. He stands up quickly, slapping his hands on his legs to indicate that he is heading out for a cigarette. 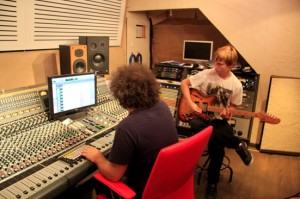 Jck Gramski in the studio

Outside, in the arctic conditions that Melbourne offers in winter, Gramski paces back and forth. He moves swiftly and effortlessly, barely moving his feet.

Gramski recently released his first album, From Crickets to Claps, which generated a stir among alternative music news media.

‘With a few more years under his belt that Jack Gramski will mature into a song writing force to be reckoned with,’ said a review by Undercover FM.

As he levitates through the entrance of Horse Bazaar, a niche bar tucked away on Little Lonsdale Street, the sound engineer signals that he is ready for the set ten minutes earlier.

‘Yep,’ Gramski mumbles in reply, hardly bothered. He scurries through the clatter of coffee tables and chairs, catching a falling bottle mid air.

‘The years at the bakery gave me  panther like reflexes,’ he says.

He sets up his gear as quickly as a soldier assembles weapons in an American action film. Once his guitar is amplified, his strap is adjusted, and his harmonica holster sits comfortably upon his shoulders, he turns to face the weary-eyed, inattentive audience.

‘I’ll try to make this quick so we can all go home,’ he jokes, tilting the corner of his mouth into a slight smile.

The nervous twitch is gone, and rather than pace across the stage, he stands flaccidly in the middle, slightly swaying as he speaks. His jokes encourage a minor snicker from the eight members of the audience, who now gaze up at him.

‘This song is the Jack G theme song, written for a reality TV show based on me. Sadly the show got axed. Maybe I just wasn’t pretty enough,’ he chuckles with his audience, as he begins his first song.

‘He is always a bit more held back in person. Then, when you see him perform, or when you listen to his record, he lets it all out. He definitely doesn’t beat around the bush, and his music is honest and raw, which reflects his personality,’ says Natalie Sultana, his girlfriend for almost three years.

Melodically, his sound is distinctively folky. A  twanging acoustic guitar, a shrill harmonica resembling a bedside alarm, and a low, mature and slightly crazed sounding voice are the basic instruments he uses.

However, coming to his lyrics, he decides to deal with very recent topics, like the suicide of two teenage girls in Dandenong ranges.

‘One thing that pisses me off about folk music is that it’s very vague, and doesn’t deal with modern topics. That’s why I write the stuff I do. I tell stories that need to be told,’ Gramski says.

After releasing his first album and an EP,  he become aware of how significant money in the music industry is.

‘Recording my album taught me three things. One, you have to be organised. Two, you need to be rehearsed, and three, you need money.’

Hence, the song Bakery Blues was born, telling the story of his time at Bakers Delight where he saved up the funds for recording.

‘Don’t ever be a baker,’ Gramski laughs, as he recalls that time of his life.

‘At first, I got payed nine dollars per hour. Second year, it went up to 11 dollars. Third year, I got 14 dollars, and fully qualified I got 18 dollars. That place just strengthened my will to do music full time. I couldn’t wait to get out of there.’

His album, which took a full month to record, has a similar intensity to his live performance, with the ability to break conversation among a group of people, as they try to make sense of it all.

‘Working on Jack’s album was definitely one of the most creative projects I have ever worked on. We recorded planes flying overhead at the airport, we recorded thunderstorms. One of Jack’s teachers even came in to play on a song,’ says Mat Robins, owner of Colour Sound Studio, Altona.

‘Jack wanted to record the rawness of his sound as it is so his album isn’t over produced. I think that really reflected his personality. If he wants to say something, he says it, cut-and-dried,’  Robin adds.

Gramski is currently working on a new record, which will hopefully be released next year. He is writing new material – which includes an out-of-character love song dedicated to Natalie – and he is also working on getting a band together in order to give himself bigger sound.

Steven Voser is a Bachelor of Journalism student at Monash University. To read more of his work, visit his blog. You can also follow him on Twitter: @StevenVoser