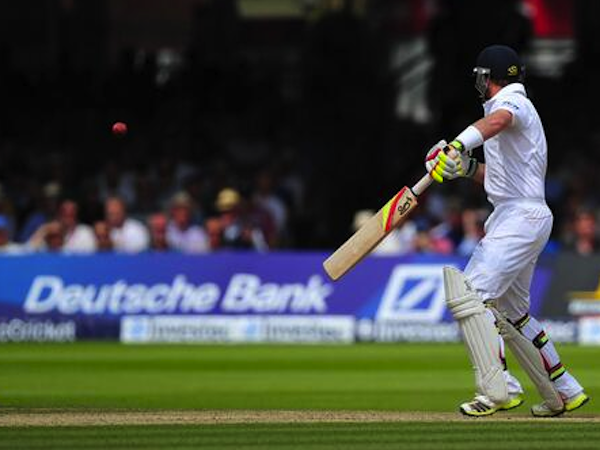 England is laughing. Not even they can believe the lack of talent and ability within the Australian batting lineup.

Their press is having a field day; their players might as well be having a holiday. In fact, they pretty much are having a holiday. Feet up on the balcony at Lord’s on a picture perfect day in London, watching Joe Root and Ian Bell cart a tiring Australian bowling attack from pillar to post. That sounds like a holiday to me.

Alastair Cook’s declaration early on day four may have even been met with groans from the England team. They didn’t want such good times to end.

Not to worry though, it took barely half a day of work before Australia was bowled out and they could again enjoy the sun from atop of the porch at the home of cricket.

Without any hint of fight, desperation or effort, the Australian top order relinquished any chance of an unlikely Ashes victory far too easily – almost so easily that it’s embarrassing.

“I never dreamt that their batsmen would be this bad,” Geoffrey Boycott said.

“The nine, ten and jack are more competent than our top three. If that was me in there I’d be embarrassed,” Allan Border echoed in Mirror.

They are claims from each country’s most respected cricketers and they are statements universally agreed upon by the cricketing world.

Australia has been brought back to reality after garnering hope in the form of Darren Lehmann. Troubles are aplenty and they were highlighted in the second test.

Fresh from being allegedly labelled a “cancer” on the team by captain Michael Clarke, we watched Shane Watson once again selfishly and self-preservingly waste a referral on a plumb LBW decision.

Just a few overs later and people begun to understand why Clarke would say such a thing; when Chris Rogers – afraid to misuse another referral – walked when he was struck by a waist-high full toss and was given out. Replays showed it was missing leg. It was utterly shambolic.

Usman Khawaja, Steve Smith, Brad Haddin and even the ever-reliable Michael Clarke all threw their wickets away. Not even the batting masterclass in patience and stroke play that they had been forced to endure from Bell and Root could inspire any of the top order to dig in.

Steve Warner, the brother of out-of-favour batsman Dave Warner, then launched a bizarre Twitter tirade against the Australian team.

Watson was described as “f**king selfish”, while axed coach Mickey Arthur was called an “escape goat”. It might have been funny had it not perfectly reflected the state of Australian cricket.

Steve Warner’s claims that Dave should immediately be on a plane back from Zimbabwe don’t have much merit, either.

Warner made just six and 11 against a Zimbabwe XI in Harare as a pitiful Australia A batting lineup was dismissed for 226 and 156 against a side that doesn’t even hold official test status from the International Cricket Council anymore.

The complete depression within the Australian team was compounded even further on Tuesday when officials learnt that James Pattinson would miss the rest of the series with a stress fracture in his back.

I know what you’re all thinking – not our best batsman gone! But yes, in a despairing statistic, Pattinson (a No.11) has an average of 36.00 on this tour, the best of any Australian.

Cricket Australia is in disarray. Staggeringly, problems off-the-field may even outweigh the gigantic problems on-the-field.

Rumoured rifts between the captain and his players, an ex-coach suing for racial vilification, bar fights, Twitter fights, change room fights – it doesn’t get much worse than this.

After the second test in 2006/07 – the series when Australia famously and ruthlessly took England apart 5-0 on home shores – Ricky Ponting banned the ‘A-Word’ from the squad. No player could mention ‘The Ashes’ before they had officially won them.

Now, after the same amount of tests played and won, Alastair Cook is banning the ‘W-Word’ from his England squad. No player can mention ‘Whitewash’ before it’s actually completed. If that doesn’t highlight the decline of Australian cricket in just six years, nothing will.