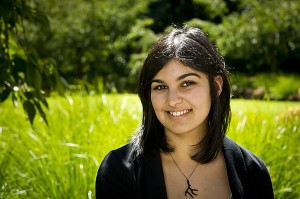 Radhika Chopra is upstart’s ‘go-to-girl’ for anything audio-visual.  This past semester she has worked on video previews for the AFL (which are now being published on Big Footy), some vox pops, and a stack of music, film and concert reviews.  She loves to write about culture and music, and is currently in her final year of a Bachelor of Journalism degree at La Trobe University.

Radhika speaks to Katharina Hackler about her role on upstart’s editorial team; her blog, The Loudspeaker; and how a photograph of herself turned into her first article for upstart, ‘Mosh pit photography’.

Katharina Hackler is an international student from Germany, studying her Master of Global Communications at La Trobe University. She is part of upstart’s editorial team and her biggest passion is radio. You can follow her on Twitter: @inlovewithoz11

Interested in finding out who else is behind upstart?  Click here to listen to some of Katharina’s other interviews with our editorial team.