Cait Kelly talks to two members of the Facebook group Australians Supporting Bernie Sanders who have been campaigning for Bernie Sanders from halfway across the world. 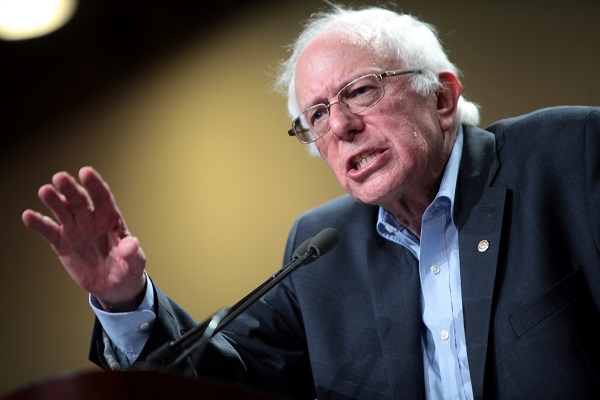 Photo by Gage Skidmore used under a Creative Commons license.

A week ago, around dinner time, a Hispanic woman in Oregon picked up her phone. On the other end was Mark Dodson, a volunteer for Presidential hopeful Bernie Sanders.

He apologised for bothering her and asked her who she was voting for.

The woman moved the receiver away from her mouth and shouted at her husband “Honey, who are we voting for?”

“Trump,” came the response. Dodson, in an attempt to appear amicable, told her that he thought Trump had a great health care plan, but he was concerned about his divisive nature.

Dodson, undeterred and committed to finding common ground to sway her with, hit back with Sanders’ equal pay policy.

She rebuffed him, telling him that a woman should just know her place. She asked him – if a woman was making more money than a man what the hell would be the point of even having the man around?

Dodson and the woman agreed to disagree and hung up the phone.

This may have been a regular case of a Republican ending up on Sander’s caller list, a problem that has dogged him throughout his campaign – except Dodson was calling from New South Wales, in Australia.

Dodson is one of the four administrators of the 1,654 followers strong Facebook page, Australians Supporting Bernie Sanders. In their attempt to help his campaign form abroad, the group organises regular phone banking sessions.

Mathis Dührsen joined the Facebook page several months ago. He was the mastermind behind organising the “Team Australia” phone banking sessions.

“Since February I’d been following Bernie Sanders on Reddit and reading and reading. If you had a machine and it would produce the ideal candidate for me, something like Bernie Sanders would come out,” Dührsen tells upstart.

“He has a sense of authenticity about him. He’s cool but he’s also uncool. He’s uncool in a way that makes him cool. It’s sort of a hipster thing. I just really liked him and it can’t be that I do nothing, I should just do phone banking for one day.’

So Team Australia was born. To date they have thirty callers who made a have combined total of 5159 calls to registered voters in the US.

“You may find that really impressive, but lets say out of ten calls, five of them are instant hang ups, two out of them will be something quick like ‘oh she’s not home,’” Dührsen says.

“The remaining three will be actual conversations.”

The call team members are mostly based in metropolitan areas; Sydney, Melbourne, Adelaide. They predominantly comprise of American expats and keen Australians, but there are a few surprises in their ranks: two Germans, a New Zealander, one Brit – even a Peruvian.

The Clinton camp also offers encouragement for internationals wanting to join in the phone banking efforts, but Sanders’ Australian team seems to be the only organised group in the country.

Within America, Sanders’ campaign enjoys a level of ‘excitement’ that Clinton hasn’t be able to pull. It would seem that it has also captured the attention of left wing Australians.

Both Dodson and Dührsen highlight the fact that many members of their group are already involved in domestic politics, with most of their members having some links to either the Labor Party or The Greens.

“I think they’re just passionate, they didn’t think they would ever see a candidate in American that was liberal as Bernie Sanders,” Dodson says.

Dührsen thinks it’s tied in to Australia lacking an inspirational figure on the left.

“When you don’t have someone in your own country who is as successful and is as inspiring and has all these things and you see someone else, in a different country, you become a fan.”

As both Trump and Clinton secured wins in the important New York primary, it looks highly likely that a Sanders presidency is unattainable. Yet Dodson isn’t giving up just yet.

“There still is a path to victory for him is he performs really well,” he says.

“I’m optimistic about this, I don’t want people to think we’re giving up… [We] definitely want people to stay active and keep phone banking and don’t get too discouraged if he doesn’t perform so well.”

“I don’t think he’s peaked just yet so I think we still need to keep pushing and help him with name recognition.”