The La Trobe Liberal Club hosted the controversial guest speaker last week after the university reversed their decision to ban her. 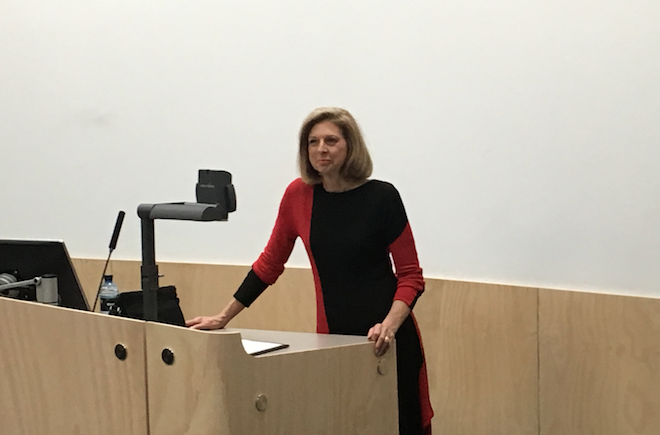 “No doesn’t always mean no.”

This was one of the many claims sex therapist Bettina Arndt made during her guest lecture, ‘Is there a Rape Crisis on Campus?’, presented by the La Trobe Liberal Club at La Trobe University last week.

Arndt’s visit was met by angry protesters, who chanted and banged on the venue doors for her entire talk.

The primary focus of Arndt’s talk was to respond to what she says is a disturbing discourse resulting from the Change the Course Report, a survey by the Human Rights Commission into sexual violence at Australian universities.

According to Arndt, this level of harassment and assault is “virtually nothing.”

She said she believes feminists are using these statistics to perpetuate a rape myth, demonise men and deny “female responsibility to clearly convey sexual consent.”

To defend her point, she recounted her involvement with a Four Corners program on consent during the 90s.

“At the time feminists were running this huge campaign, ‘no always means no,’ they said, and of course no doesn’t always mean no,” she said.

He said the Liberal Club was not trying to silence victims by hosting Arndt.

“I’m not completely aware of the statistics myself as to if there is a rape culture or not … that’s not to say that no one is harassed or raped on campus,” Spiteri told upstart.

“Just because she was speaking on campus doesn’t mean that anyone who was in attendance or anyone that wanted to hear her opinion necessarily agrees with her views.

“I applaud the people that actually went, disagreed with her views, heard what she had to say and then asked her a question. That’s how I think that debate needs to happen.”

After listening to Arndt speak, he said: “She had some very backwards views in my own opinion.” 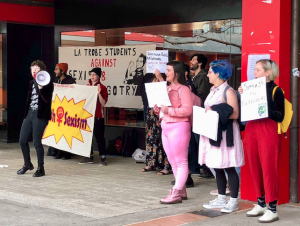 During the lecture Arndt suggested that the increased concern about sexual violence on Australian university campuses is the result of a similar discussion in America.

She used the Hunting Ground, a US documentary exposing rape on American colleges, and the Columbia mattress girl as prime examples.

Arndt said the documentary is a “propaganda movie” that deliberately promotes the view that campuses are unsafe, while the Columbia University case is an example of young men being wrongly accused of rape.

Arndt reported positively on the Change the Course survey results and called out the mainstream media for reporting the “great news” in a negative light.

“… all they came up with were these really tiny numbers and that should be cause for celebration. That means our universities are really safe places for most young women,” she said.

Arndt also criticised the way the survey counted incidents that didn’t necessarily involve other students, didn’t occur on campus, were minor incidents such as “unwanted staring,” and that there was an overall low response rate.

She believes that while misogyny is unacceptable, young men are at risk of being punished for natural sexual behaviour.

“What really worries me is that any display of normal lusty male sexuality is now being demonised and can get men into trouble,” she said.

“I need to say that of course I’m very interested in protecting women from sexual assault. Rape is rightly a criminal offence and should be treated very seriously.

“Some universities have already caved in and started introducing committees to investigate rape cases.”

La Trobe University originally banned the event, but changed their decision after being criticised for not allowing diverse opinions.

“Bettina Arndt’s views do not represent those of this university. She is not coming as a guest of the university, but at the invitation of a student society. Nevertheless, it does not follow that we should prevent her from expressing those views,” he wrote.

“There’s already been enough evidence to say that sexism is a problem, not only on uni campuses but throughout society,” Tavan told upstart.

“Bettina Arndt has no limit to her freedom of speech. She has a platform at a nationally syndicated newspaper … she has been invited as a government advisor on things like child law and family tax … she has interviews on Sky News all the time.

“We are willing to give her a platform and let her speak but we think that counter-protesting is a good way to put an alternate perspective out there.”

Here's a taste of my talk at La Trobe University.
Very rowdy event with howling mobs outside, banging on windows and trying to disrupt proceeding. But appreciative big audience inside.
Great start to my campus tour! pic.twitter.com/Uchy0NwgRr

During question time, one audience member responded to Arndt’s comments on consent and rape in marriage.

“I’m dumbfounded with some of your ideologies here today … have you ever sat down with victims of marital rape?” she asked.

“I can tell you right now how hard it is to get believed as a victim within the court system.”

Arndt struggled to answer each question over the loud protestors and arguing audience members and the event came to an abrupt end. Security refused to let anyone leave until the protestors had dispersed and escorted Arndt from the venue. 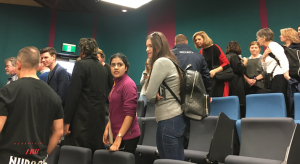 Security blocked exits as protestors banged on the doors.

“I think that the fact that the Liberal [Club] is trying to host such blatantly controversial, disgusting ideas should be considered a warning sign for young people. It’s not a normal position to take,” she said.

“I think it really goes to show that they’re trying to recruit and grow by appealing to misogynists and men’s rights activists as well.”

Spokesperson Jamie Spiteri said the Liberal Club did not host the event to be malicious.

“One of the largest reasons why we exist is to just give some people that do have differing views a platform to share them, whether they’re exceptionally conservative, catholic or just moderate, or they just want to distance themselves from far leftists,” he said.

“If there are people that are involved in it that are attracted to far right ideology then that’s their own agenda that they can follow.”

While La Trobe received backlash from some students for allowing the event to go ahead, Tavan believes the university should not be held responsible.

“I think it’s the students’ responsibility to stand up to sexism and racism on campus,” she said.

“The most important thing is to publicly show that the majority of young people and students disagree with her.”

If you are in need of support, the following services are available to help: