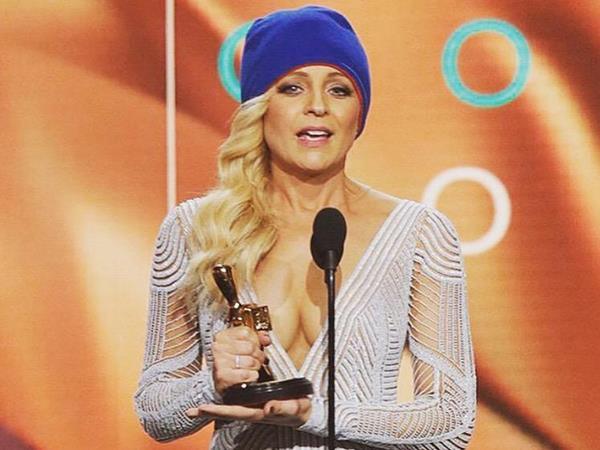 When she took to the stage to accept the Gold Logie on Sunday evening, having already thanked her crew during her first acceptance speech, Carrie Bickmore used the two minutes she had to raise awareness for brain cancer.

As she pulled on a beanie and urged others to do the same, Bickmore spoke of her late husband’s battle with brain cancer before he passed away in 2010.

Following her speech, the hashtag #beaniesforbraincancer began trending on social media. More importantly, her heartfelt words opened up a dialogue across Australia about the often terminal disease.

According to Cancer Council Victoria, brain cancer takes about 1,100 lives nationally every year. It is the leading cancer killer for young people under the age of 39 and children under 15 years of age.

“Today, two-in-three Victorians will survive cancer five years after diagnosis. If we are to lift overall cancer survival rates, investment in dedicated research into ‘forgotten’ cancers, like brain cancer, needs to happen,” he says.

Rachael Woodhams was diagnosed at 16 with what appeared to be a non-cancerous tumour. Two years after her initial diagnosis, however, her health deteriorated, and she passed away in 2013.

Johnathan Woodhams tells upstart about the impact that the disease had on his family after they discovered his younger sister had a brain tumour.

“Once she found out it was cancerous, it was a rapid decline,” he says. “We went from a mentality of we can battle this to her not having long left to live,” Woodhams says.

“She slowly couldn’t walk by herself and had to be in a wheelchair. Her ability to speak went from being slightly slurred to having to ask her to either repeat things multiple times or get her to write them down.”

As Rachael tried several medications to manage the tumour, her body reacted with an onslaught of seizures. At its worst, she was having up to eight seizures a day, which caused further damage to her health.

Rachael’s tumour could not be operated on as it was too close to the parts of the brain that control key functions such as speech.

Her story highlights the lethal and unexpected nature of brain cancer, which often doesn’t show symptoms until it is too late.

Although rare, Glioblastoma is the most common malignant primary brain cancer. It affects two to three in every 100,000 people.

Atkins explains the difficulties brain cancer presents when it comes to treatment are mostly due to its location in the body.

“The brain is a little unique in the way that it’s not like skin cancer where you can take out the mole or take out a few inches of the skin and it doesn’t make too much difference. With the brain, you can’t do that,” he tells upstart.

“When it comes to taking out tumours, you can’t remove big margins or tissue. By virtue of the way it grows, you sort of have to leave some in there and of course that comes back and can end up killing the patient.”

An attempt to remove tumours is made when possible. In other cases, the aim of treatments such as radiotherapy is to slow growth and relieve symptoms by shrinking the tumour and any swelling around it.

Atkins highlights how limited treatments for brain cancer are.

“Treatments for brain tumours are largely limited because of the blood brain barrier. There is a barrier that exists between the blood and the brain. It’s restrictive so a lot of treatments and modules can’t pass through,” he says.

“There is no cure until they can find treatments that cross the blood brain barrier and specifically target the cancer cells.”

Given the high mortality rates, research conducted by The Royal Melbourne Hospital Neuroscience Foundation and organisations such as the Cancer Council is crucial to finding better treatments.

According to the Cancer Council, the Australian Government provided $856 million in funding research projects from 2003 to 2011.

The Cancer Council Victoria has spent more than $14.5 million on research into the detection and treatment of all tumour types. It has also taken steps towards addressing brain cancer by awarding $375,000 in research grants.

“In almost 20 years we’ve seen no significant improvement in survival rates for brain cancer, with the five year survival rate sitting presently at 22 per cent nationally – well behind other more common cancers, like breast and prostate,” Harper says.

“With more dedicated research funding for rare and less common cancers including brain cancer we should be able to increase the survival rates of all cancers.”

Woodhams donned a beanie yesterday as the disease that took the life of his sister made headlines across the nation. He urges people to keep talking about the disease so that more funding can be invested into research and treatment.

“I think it’s good that the word is getting out there but I don’t want it to be seen as a social issue,” he says. “I don’t want it to just disappear after six months because brain cancer is one of those things that never goes away.”

Although the #beaniesforbraincancer hashtag has started an important social movement, further funding and research is needed to combat this often lethal disease.