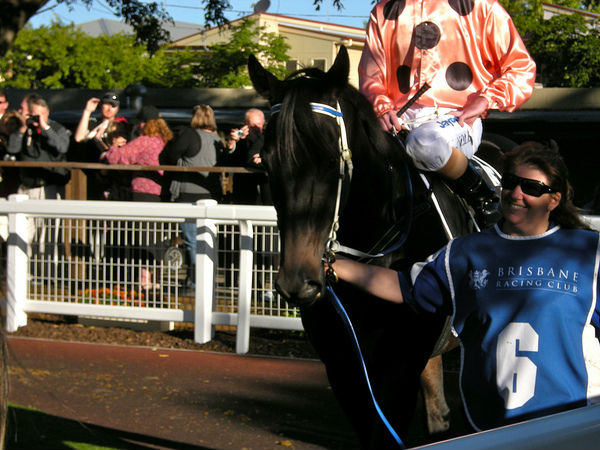 Ask anyone for their thoughts on Black Caviar and their answer will sort them into one of three categories.

– Those who aren’t interested in horse racing, and can’t see why that should change because of Black Caviar.

Initially I fell into the third category, but after I saw Black Caviar race last year, I moved into the second group.

Having spent hundreds of hours working at Flemington and Moonee Valley over the last five years, I’ve become a bit of a cynic when it comes to horse racing. There are a number of reasons why the sport doesn’t grab my attention, but my biggest problem with horse racing is that the vast majority of those who follow it don’t appear to actually like it.

Consider those who attend the races. Many attend for social reasons, rather than for the sport itself. Think champagne, “fashions on the field” and suits from Peter Jackson. Women carrying their high heels home because they’re too drunk to walk in them, men trying to wave your car down as you drive past, even though it looks nothing like a taxi. These people go to the races for a good time. The horses just happen to be there.

Those who aren’t attending for social reasons are there to make money. There is no sport more synonymous with betting than horse racing. I’m not mentioning gambling because it concerns me from a moral point of view – it simply highlights the fact that more people are interested in the outcome of the race than the race itself.

If those who go to the races aren’t there for the races, how could I even entertain the idea of having an interest in the sport? With this perspective, it’s hard to imagine how I ever became taken with Black Caviar.

While last Friday’s William Reid Stakes – which saw Black Caviar remain undefeated from 24 starts – received plenty of attention, her races weren’t always so built up. I saw Black Caviar run at Moonee Valley last year. There was a reasonable-sized crowd there, but it wasn’t a corporate affair in the vein of the Melbourne Cup, Cox Plate or Crown Oaks. Those who saw her run that day at Moonee Valley were there to see her.

I love that most people don’t bother betting on Black Caviar – at least not any more. There isn’t much point when she’s paying $1.01 every start. Whether you see her live, or watch on TV, you can see the race without being bombarded with information about which horses offer “value” and which have been showing good form. The punters know she’ll win. The bookies know she’ll win. Everyone knows it, so betting becomes a pointless exercise.

However, Black Caviar does more than allow us all to watch a horse race without the hoopla that normally accompanies racing. When I witnessed Black Caviar in full flight, I felt something incredibly rare. The best way I can describe it is to draw a comparison with one of my favourite sporting events.

Anyone who attends the annual ANZAC Day match between Essendon and Collingwood will cite the atmosphere as being the thing that sets it apart from all other AFL games. Before the game, the crowd and players stand as one; first in a roar as both sides run out through a single banner, and then in a moment of silence. It’s a unique football experience. But when the national anthem finishes, it’s over. As both teams separate and run to their huddles, the standard “us vs. them” mentality re-emerges.

When Black Caviar runs, there is no “them”. One of the greatest things that sport can do is unify people, and Black Caviar does it every time she races. I won’t ever forget standing on the last turn at Moonee Valley, watching Black Caviar glide gracefully past every horse in front of her, while everyone around me screamed and willed her forward.

In moments like that it doesn’t matter how much you paid for the suit you’re wearing, how much money you stand to win, or how much time you spent looking at the form-guide before the race. It is a simple, unadulterated sporting moment where everyone knows that they’ve seen something special and that the person beside them feels the same way.

In the lead-up to last week’s race, a customer at work described Black Caviar as “the people’s horse”. I thought this a cliché initially, but having seen her race again last Friday I know exactly what he meant. Black Caviar is for – and belongs to – everyone, not just those involved in racing. Her trainer, Peter Moody hit the nail on the head after she won Friday’s race, when he said “she showcases our sport so well.”

Another sporting cliché, “pure class” is an apt way to describe Black Caviar. She is classy in that she dominates without ever looking like she’s trying. But it’s the “pure” part that is so often missing from racing, which is ever-present with Black Caviar, that makes her so special and so rare. Each time Black Caviar races she takes a few more people with her. Let’s hope she has a couple of races left in her yet.

Sam McInerney is Upstart’s Deputy Sports Editor, and is studying a Postgraduate Diploma in Journalism. You can follow him on Twitter @SamuelMcInerney