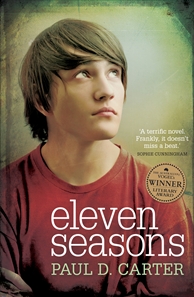 For outsiders, the attraction of Aussie Rules football is hard to understand. In WA in winter it hovered at the edge of my consciousness and I chose a team as an easy way of identifying my allegiances to the north or the south of the river.

In Melbourne, football culture assaults me with the presence of loud fans in the city after games. Wide-eyed children on the tram, bedecked in team colours with a parent by their side, bring to mind memories of my mother’s stories of going to the football as a teenager with a much-loved older cousin who has long since passed away.

Bruce Dawe’s poem Life Cycle gave me something of an insight as a youngster into what it meant to grow up with football in Melbourne. Now, Paul D. Carter’s Eleven Seasons, which won the The Australian/Vogel’s Literary Award for 2012, has added a stirring contribution to the way I understand the culture of AFL, revealing both its problems and its power from the inside.

The main character in Eleven Seasons is Jason, a passionate Hawthorn supporter. He plays the game very well indeed and longs to join the under-thirteens team – if only his mother, Christine, would let him. Jason’s dad is not on the scene, and the relationship between Jason and his mother, with football as a disruptive third partner, is at the heart of the novel.

Eleven Seasons beautifully captures  the seductive power of the sport and its value for this young man. He is disengaged from school; his mother, working double shifts as a nurse, is never around; and he soon finds friends who drink and smoke and tag their names on walls near the train line. Football is the one thing that makes Jason feel worthy, and without it, he would be easily adrift.

The novel is in two parts, and in the first we are fully in the mind of an incommunicative teenager. It drags a little, but the tension soon builds towards the shocking climax at the end of part one. This climax changes Jason’s relationship with football forever, and when we return to him after a few lost years in the middle, he is a confused young man trying to make sense of his life.

I saw Carter speak at Debut Mondays at the Wheeler Centre a few weeks ago, and his reading of an excerpt from the novel spurred me to buy it. He spoke of beginning this novel ten years ago and wanting to write a great, all-encompassing Australian masterpiece. He said that he soon realised he didn’t have the talent to do this, and spent the following years teaching himself to write.

He described Eleven Seasons as a very modest novel compared to what he’d set out to write in his early twenties. Perhaps, but the result is a work to be proud of. It is a Melbourne novel, not because it relies on the city to form a backbone to the story, but because it captures the voice and heart of a young boy mad on football, and makes this seem both reasonable and meaningful to an outsider.

The novel’s resolution is a little disappointing because of the absence of Jason’s mother, Christine, in spite of her central role in the book. Nonetheless, Jason’s voice provides a unique window into the perspective of a teenage boy, and Eleven Seasons is a moving story.

Suzannah Marshall Macbeth is currently completing the Master of Global Communications at La Trobe University and is a former member of the upstart editorial team. This review originally appeared on her blog equineocean. You can follow her on Twitter:@equineocean