The eighth Australian Footbag Championships were held over the Easter weekend in Sydney and competitors from all over Australia came to test their skills in a range of events. The first event was ‘Footbag Golf’, played through a scenic and historic course around The Rocks area. Tasmanian Jeremy O’Wheel took the first of many first places for the tournament with a win on the final hole. In his first tournament Mitch Dobbin went very close and it was only a bad bounce on the final hole that cost him the win. Your reporter got out to an early lead but fell away to second-last place by the final hole.

The more serious events began on the Saturday at the Royal Easter Show, with ‘Shred 30’ being the first cab off the rank. In an event that features 30 seconds of high intensity footbag, Jeremy O’Wheel and yours truly both posted personal bests, taking out first and second respectively. Sydney’s Dyalan Govender finished in third place.

The other events at the show were ‘Shred Battles’ and ‘Sick 3’ and once again, O’Wheel was dominant. Newcomer Ryan Richardson from Melbourne got among the medals with a third place in the ‘Sick 3’, an event that involves players trying to hit their hardest combination of three tricks.

Events moved to the Sydney Harbour YHA rooftop the following day. With the overnight rain hanging around the chance to utilise the incredible harbour views looked to be lost. But somehow the sun came out right in time, and the event was held in perfect conditions.

There were two events remaining; ‘Routines’ and the ‘Circle Competition’. The crowd gathered to see if Jeremy O’Wheel would make a clean sweep or if a challenger would arise. The early routines showed strong signs for the future of Australian footbag, with some impressive skills on display. After appearing as a judge or sponsor for the last few years, the man known only as ‘Lotus’ returned from the competitive wilderness to deliver an impressive routine for third place. Your humble reporter had some wise advice from his Grandpa immediately before performing his routine; ‘Don’t drop it’. 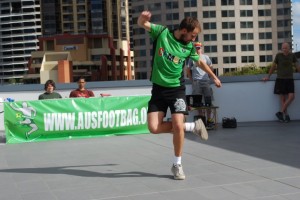 The words of wisdom inspired yours truly to go and perform a dropless routine, the aim of every footbagger. This put the pressure on O’Wheel who had a number of drops in his routine but the Tasmanian’s routine also had a much higher level of difficulty which posed a challenge for the judges. In the end only 0.2 points separated first and second with yours truly taking the title in a dropless routine.

To make amends for his second place, O’Wheel completely dominated the circle event, taking his fifth of six titles. The ‘Circle Competition’ runs over two separate rounds; ‘variety’ and ‘difficulty’ and while the unique style of Lotus put him ahead in the variety round, a late charge in the difficulty round saw your reporter finish the day in second place.

The event was a great success. The Australian Footbag Association would like to thank the Royal Easter Show, Sydney Harbour YHA and all the players involved for making it another great weekend. The National Championships will head south next year, with Melbourne hosting the 2011 event.

Daniel Boyle is currently enrolled in the Masters of Arts (Writing) program at Swinburne University. You can read more of his work at his blog, Capital Eyes.