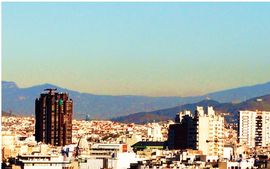 While most of Europe is paralysed by snow and wintery cold, Barcelona is blessed with the warming sunshine of early spring. The streets are vibrant and filled with locals as well as a shocking amount of confused guiris (word used for white, non Spanish speaking tourists).

As an aspiring food journalist the dream would be, in the spirit of my house god Matt Preston, to  visit the world famous Barcelonan restaurants El Bulli and El Celler de Can Roca which both made it on his list  of ‘The five best restaurants in the world”’. As I lack both the exquisite  palate and the funds of good ol’ Matt I decided not to wet my beak in the posh culinary world where he belongs, instead I’ll just write about what I know – breakfast.

The multicultural city of Barcelona has around 3 million inhabitants and by the looks of it about as many bars and restaurants. Tapas, paella and seafood are specialties in most of them and the food is (generally) magnificent. However, the problem arises when I realize that here, as well as in most European cities, the breakfast variety – in lack of a better word – sucks.

As I stroll around the streets of the ’bohemian’ barrios (areas) such as Poble Sec and Raval, the picture-filled menus displaying the various desayunos (breakfasts) makes me contemplate if I might skip the first, and most important meal of the day and go straight to lunch. This, coming from a proper breakfast aficionado is a sign that the spread isn’t exactly impressive.

Disappointed with my first try to find a proper and delicious breakfast, I decided to try some barrios where the restaurants (as well as the punters) are a bit posh. The area by the harbor and the newer parts of Barcelona such as Poble Nou (which shockingly translates to New Colony) also displays a vast supply of restaurants, bars and bodegas. Sadly the menus are the same as the day before, except for the images.

Fried eggs with two stripes of bacon and some French fries seem to be the most popular egg dishes, although you rarely see anyone eat it. Good on them, I’d rather go hungry than have fried potato strips for brekky, the exception being the scrumptious Spanish style potatoes – Patatas Bravas.

Coffee and a baguette appear to be the choice for most Spaniards, and guiris. I asked the waiter in one of the lovely and extremely kitsch eateries along the horrendous tourist strip Las Ramblas if they served poached eggs in which he replied: ‘No se señorita’ and quickly escaped in to the kitchen, probably to laugh with his mates at the blonde tourist who wanted them to boil her eggs without the shell on.

A few days into my Barcelona trip I start to understand the Spanish way of eating. You eat something very small for breakfast so you can fit the large amount of food you scoff down for lunch and dinner. So, when in Rome. – um, Barcelona – I eat small sandwich and have a coffee for breakfast. And I’m pretty happy about it since my lunches and dinners has been exquisite. However don’t expect me to kick my habit forever; in about a month’s time you’ll have a fair chance to spot me shoving large amounts of poached eggs and mushrooms or eggs Benedict down my throat at my normal water holes (Northern Soul, Maize or Mixed Business).

For a person who likes a sandwich, baguette or croissant for breakfast, Barcelona is a smorgasbord of opportunities. For an egg-crazy person such as myself, there’s no place like Melbourne.

Lisa Rosman is a Bachelor of Journalism student at La Trobe University. This post was first published on her Breakfast Aficionado blog.