Scoring a place in the AFLW wasn't enough for Brooke Patterson, who is now working towards attaining her PhD for her research on ACL injuries. 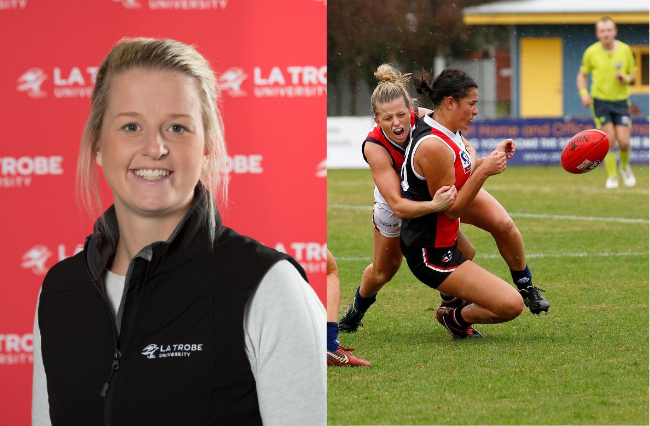 “My colleague calls me the dumbest smart person he’s ever known,” says Brooke Patterson, an ex-AFLW player and soon-to-be holder of a PhD. Along with a Melbourne Demons teammate, she missed a flight to a pre-season training camp (due to being pre-occupied eating), only to book another ticket for the wrong airport. She describes this as being only one of her many tales about her “klutziness and general struggling”.

Although being susceptible to such funny mishaps throughout her life, Patterson, now 30, has never been a stranger to hard work. From captaining her junior Tasmanian state basketball teams for years to juggling a doctorate and AFLW career simultaneously, her story has been very multifaceted (and quite impressive).

Patterson’s life started with humble beginnings, growing up in a small court in the west coast of Tasmania. She says she became somewhat of a tomboy being predominately surrounded by boys, which led to her discovering her passion in footy.

“Mum would try and make me put a dress on. I’d chuck a tantrum and refuse so I could go out in the cul-de-sac and kick the footy with the boys,” she told upstart.

But despite her love for football, prior to the AFLW, a career in footy wasn’t very realistic for women, so the athletic Patterson turned to the next best thing, basketball.

Loving the team environment and possessing strong leadership skills, Patterson eventually became the captain of her basketball team. She was first a captain for her under 14s team, before leading her team all the way to the under 20s.

After finishing her undergraduate degree, Patterson had the opportunity to temporarily be the Red Hot Chilli Peppers’ physiotherapist while they were performing at Big Day Out, to help aid them after playing their instruments.

Experiencing eight broken arms in her life while also being very studious, Patterson began researching the anterior cruciate ligament (ACL) for her doctorate. Coincidentally, she injured her ACL playing basketball during this time. Patterson says she appreciates her research more now that she can put herself in other’s shoes.

“I know how frustrating it is when you’re injured and can’t just go for a run or get out there and play sports with teammates, because what you enjoy is being out there and training and having fun. If you can’t do that, then I know how it feels,” she said.

While coordinating training for the La Trobe men’s football team, Patterson filled in for a few games after the coach praised her talent. But due to the old-school stigma of ‘women playing footy’ holding her back, she didn’t yet pursue football seriously.

After a long basketball career and being inspired by one of Daisy Pearce’s best and fairest speeches, Patterson began playing for the Darebin Falcons (where Pearce played).

Just as she was getting married, the AFLW was announced, so she took the Sherrin to the Maldives with her and was practicing while she was meant to be on vacation, another testament to her intense commitment to everything she does.

Being a stand out for the club, Patterson was drafted 104th to the Demons in the inaugural AFLW season, and says she is grateful to have been part of the league’s inception.

“Getting drafted and being part of the first season of AFLW… and the sacrifices that you made to give it your best shot, that’s something to be proud of and tell the grandkids in the future,” she said.

Patterson deferred her PhD for six months while playing in the AFLW to surface a program for community coaches to implement to try and reduce injuries in female footballers, as there were copious amounts of injuries occurring. This was something that was important to Patterson as she believes that avoiding injuries will help maintain the growth of the sport.

“We don’t want girls getting deterred from playing because they’re getting injured. So the more injuries we can help prevent, then it means that more girls are getting the opportunity to be out there and get fit, healthy and active.”

After playing three years in the AFLW, Patterson retired and has taken up a coaching role. She now trains the first-year Melbourne Demons’ girls. Today, her days involve completing her PhD and coaching her young prospects.

“I really enjoyed the role of helping those girls try and bring them up to speed so they could slot in, and all of them got a game this year in the end. So it’s pretty rewarding.”

Ashton Tresidder is a second-year Bachelor of Media and Communications (Sports Journalism) student at La Trobe University. You can follow him on twitter @ashton_tres