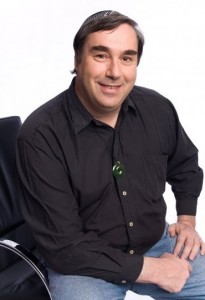 Once they’ve left, he’ll turn to the remainder. ‘You are not here to use your position as a journalist to agitate for social change. You are here to do a job for the public. And if the public do something with the information you provide, that’s not your concern. If you want to make the world a better place, you do a straightforward job as a journalist. The rest takes care of itself.’

Hill has spent 17 years as a Pacific specialist, first at Radio New Zealand International and now with ABC Radio Australia. For a man who fell in to his specialty one Shabbat morning in synagogue, Hill has reported from almost every Pacific country, a region he initially knew as ‘big, blue, wet and up north’. From fishing bodies out of the sea to media freedom in Fiji to why he doesn’t admire John Pilger, he shares it all with Isabel Robinson.

Did you go into journalism wanting to change the world?

Yes I did. I was very young and callow.

What advice do you have for aspiring journalists?

I think that younger journalists do themselves a disservice if they give themselves airs and graces beyond their actual station. It’s not a great liberal profession. It’s a trade: like being a chippy or a sparky. I’ve seen younger people coming in over the years thinking of journalism not as a craft, as something that you do that in and of itself benefits society, but as a means by which they can influence society in a direction that they’ve decided is a good way for society to go in. I think that pollutes the whole profession.

You’ve been working as a Pacific journalist for Radio New Zealand and Radio Australia for 17 years. How would you describe your time?

Disillusioning in some respects. Hilarious in others. All sorts of crazy things happen in the islands I’ve found that being a specialist in an area has enabled me to really get a handle on the issues. Most journalists will flick from subject to subject: a good journalist should be able to do a story about pretty much anything. But I’ve found that being a specialist in this area has enabled me to know an awful lot more about the historical background. Having been around for seventeen years, something can happen in the Pacific and I go: ‘Ah, we need to talk to this person, because this happened in 1993 and I remember I talked to him, let’s see what he says now.’ Having that historical perspective is tremendously useful.

Why did you choose to specialise in the Pacific?

I didn’t. I was sitting in synagogue one Shabbat morning and the guy sitting next to me worked at Radio New Zealand. I was out of a job and I said ‘What’s going at Radio New Zealand?’ and he said ‘Well, I’m in charge of the Pacific section, we’re looking for a reporter. Do you know anything about the Pacific?’ And I said ‘It’s big, it’s blue, it’s wet, it’s up north.’ He said ‘That’s a good start. Why don’t you just rock up and we’ll see how you go?’ I rocked up and I’ve been doing it ever since.

How much are you motivated by a passion for what you do?

I’m a hundred per cent motivated by the passion. If you turn up for work one day and you’re just trudging in for the pay cheque, for God sake chuck it in. You can’t live like that. And you certainly can’t do good journalism like that, you’ve got to have some spark.

What’s been the highlight?

When I was at Radio New Zealand, I was sent to Vanimo on the northern coast of Papua New Guinea to report on a tidal wave disaster, which was absolutely horrific. I never understood the black humour of the film MASH until I’d been up there: ultra-violet humour.

Three or four days after it happened, we were out on a boat trying to get the bodies in: by now the bodies that had been washed out to sea were bloating and floating to the surface. We were trying to get this body on to the boat, but it had been in the water so long that it was breaking up. While we were trying to get it into the net with a big hook, one of the guys said: ‘For God sakes man, pull your self together’. We just fell about laughing, it was uncontrollable.

We were also faced with quite a few conundrums. A lot of the aid that was flowing in to PNG from all over the world was being stolen at the airport in Port Moresby: aid was coming in the front and disappearing out the back.

Should we in the international press corps have reported that? If we had reported it then a lot of the aid would have stopped. We discussed it amongst ourselves, and came to the conclusion that we would make allusions to problems in the supply chain without actually saying half of it is just walking out the back door.

What’s been the major challenge?

A few years ago, there was quite serious talk about closing Radio Australia down. It made no sense – why would you shut off your voice in Asia and the Pacific? To save money? You lose a lot more in the long run than you save in terms of the cost of running the thing. By having an Australian voice out there you get to put your point of view across. Radio New Zealand and Radio Australia are players, they’re respected news voices. All the more respected because they’re genuinely independent.

In the Pacific, it’s not just what we say, it’s how we say it. Radio Australia is an example of impartial, Western style, ‘nothing-is-sacred, ask-the-questions-that-need-to-be-asked’ journalism that they still don’t have in large swathes of the Pacific. A lot of jobs in journalism are dependent on government funding, and governments are much more hands on when it comes to people asking them impertinent questions. We can do things in Melbourne or Wellington that you can’t do in Suva or Nuku’alofa or Honiara without losing your job.

It’s really irritating for the local journalists up there, but sometimes the politicians will talk to us before they’ll talk to them, which is just wrong. I feel for the local journalists who do a brilliant, brilliant job: my hat goes off to the ones who are working in Fiji at the moment. They’re crazy brave. I thank God every day that I work in a Western system which has free speech and rule of law, and a neutral and impartial media with no government interference. Because I’ve seen the alternative and it’s not pleasant.

In a word, how would you describe your journalistic style?

Fair. I always like to get both sides. That’s all we ask of a journalist. It doesn’t matter what your own personal opinions are: if you do a good solid job no one minds.

If you were starting out again now, would you still go into journalism?

Probably, but with much reduced expectations of career longevity. I would go into it as a first-half career, laying the foundations for something in either politics or public relations. I think the jobs for senior specialists are infinitely reduced from what they were. Largely that’s due to the death of newspapers.

Do you have a journalist you most admire?

Not John Pilger! John Pilger is an example of everything that is completely wrong. The man’s a political activist, he’s not a journalist. I admire Alistair Cooke, and his Letters from America. Straight, bit of dry wit, knew his stuff, sharp right up until the end. Inserted himself in to the story if necessary, usually not.

There’s an amazing journalist called Michael J Totten. He’s a self-funded foreign correspondent specialising in the Middle East. People subscribe to his site and they actually fund his trips. He also gets a lot of feedback from his audience. You can say ‘Can we have an article about this?’ and he’ll go off and do it. It’s like creating your own newspaper column with this amazing foreign correspondent.

What do you think you’ll be doing in five years?

I’d like to think I would be doing broadly what I’m doing at the moment because I think it’s valuable, it makes a contribution, and I enjoy it. The day I wake up and realise I’m not going to enjoy myself that day is the day I go down to human resources and say ‘How much have I got in my super scheme? Thanks very much, ka-ching!’ and off I’ll go.

What qualities are integral in a good journalist?

A genuine intellectual curiosity. The ability to actually to listen to what someone’s saying and be prepared to change the direction of the interview depending on what they say.

Isabel Robinson is a Master of Global Communications student at La Trobe University.