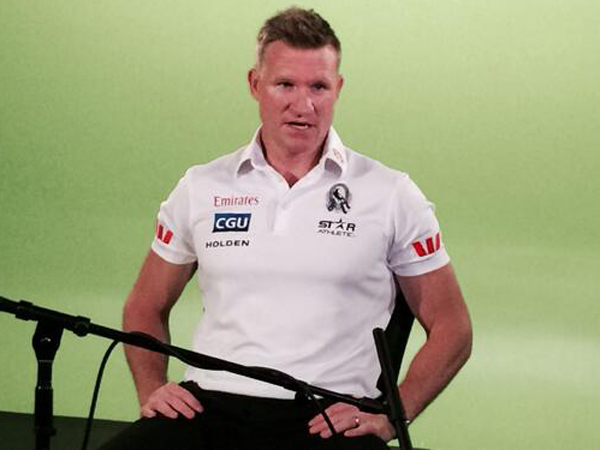 Ask any AFL coach what they want their team to be the best at, and almost every one will say the same thing.

Collingwood coach Nathan Buckley is no different, telling upstart that his expectations will not be compromised.

“A strong and consistently defensive side, that plays hard contested footy,” he says.

But after their round one loss against Fremantle, in which they conceded 116 points, Buckley admits that it is an area in need of improvement.

“We need to improve our ability to defend,” he says.

“That’s a challenge even during this pre-season, we’ve wanted to defend better, but we’ve given up 100 points a game basically every game we’ve played.”

The man in charge of the most famous club in the AFL has had the chance to mould this team to his liking for the last two years since taking over in 2012.

Unfortunately for him, Collingwood’s output has declined in that period.

After making the grand final in 2011, Collingwood has finished 4th then 6th during Buckley’s tenure, notably bowing out in the first week of finals last season to 7th placed Port Adelaide.

But as he completes his final year on the original three-year contract, an extension was granted a fortnight ago, to ensure Buckley remains at the helm of the club until at least 2016.

The faith from within the club is clear and the club evidently believes that this is the man to take Collingwood back to the top.

And Buckley is adamant that his team will contend in 2014.

“We’ve got really solid expectations of our performance,” he says.

Yet, there has been harsh criticism towards Collingwood recently, with claims by some that they will go down the ladder before they can contend again, and calls for the club to reassess their expectations for this year.

“That’s more external than anything else,” he says. “There’s never a penalty or a detriment of aiming high.”

And the haste that people have jumped on Collingwood’s aspirations and knocking them down following just one performance is unjust according to Buckley.

In his post-game press conference on Friday night, he summed it up logically.

“We will more than likely sit at the bottom of the ladder with our percentage at the end of round one, but we will be four points away from the top,” he said.

And so, as Buckley anticipated, Collingwood sit at the bottom of the ladder following round one.

But they are just one game away from the top and they have a further 21 games to prove their worth in 2014, starting this weekend.

“We’ve had a good block of training last week to sharpen the boys up and start the season again basically,” he says.

The scrutiny will continue to come; and predictions and forecasts will keep being made, and Buckley understands this and has no issues with it.

“They exist separately to our internal ones (expectations),” he says.

Buckley no doubt will continue to ignore all external influences, and season 2014 for the Magpies will be about his expectations, and his alone.

Jake Keating is a third-year Bachelor of Journalism (Sport) student at La Trobe University and is the sports co-editor for upstart. You can follow him on Twitter: @JKeats10.