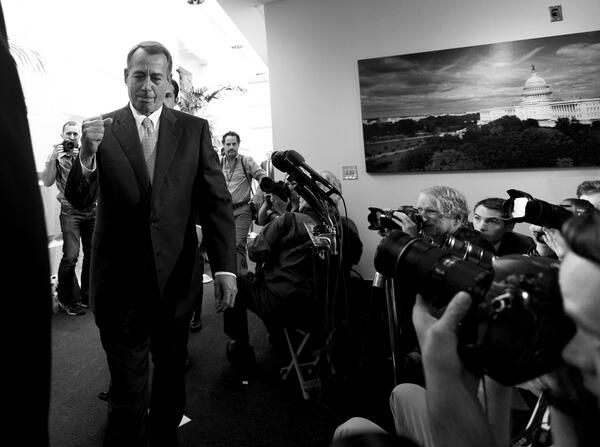 As predictable as it was pathetic, the US government reached an agreement to raise its debt ceiling at the clichéd stroke of midnight, only after pushing the worldwide economy to the brink of catastrophe.

Senate Majority Leader Harry Reid announced a deal that calls for reopening the federal government with a temporary budget until January 15 and extending US borrowing authority until February 7.

“The compromise we reached will provide our economy with the stability it desperately needs,” Reid said, after working behind closed doors with his Republican rival Senator Mitch McConnell.

Speaker John Boehner and other top House Republican leaders announced their intentions to support the bill, effectively bringing a close to this tumultuous, frankly embarrassing, chapter of American politics.

But, with the ink still drying on presumably autographed agreements, the overwhelming isocracy of the entire ordeal is painstakingly clear.

After weeks of posturing and apocalyptic promises, the G.O.P expectantly blinked, conceded defeat in – what it describes as – its battle over the Affordable Care Act, the signature policy of Barack Obama’s presidency.

“We fought the good fight, but we just didn’t win,” Boehner told a local TV station in his hometown of Cincinnati, Ohio.

With all due respect, no Speaker Boehner, you didn’t.

Speaker Boehner pumps his fist after being asked "did you fight the good fight?" following a meeting with House GOP pic.twitter.com/kRG2OR2uik

Over the course, Republican politicians and pundits have sermonised ad nauseam about how the root of this entire fiasco was Obamacare.

Cries of “unconstitutional” and “communism” were splattered across cable news bulletins and Twitter feeds with such furor and frequency it almost seemed a plausible thought.

The heartland ate it up, arming themselves with “Impeach Obama” placards; responding to the perversely misleading narrative spewed forth.

While the introduction of one of the most controversial bills in recent history serves as good rallying cry for the G.O.P and its supporters, identifying it as the rationale for recent acts is a blatant lie.

Well, That Was Stupid: The Shutdown “Crisis” Is Over http://t.co/X6jj9QyDNn

Militant factions within the Republican Party pushed the national economy to the brink of collapse because it wanted to, not because Obamacare was a hideous attack on the civil liberties of American citizens.

G.O.P politicians have been fixated with the idea of shutting down the US government, openly stating such unholy desires since the 2010 midterm elections. Fuelled by a sense that it painted its party in a positive, desirable light, Republicans maliciously steered the proverbial car towards the edge of the cliff, undaunted by the potentially devastating repercussions, should it achieve its goal.

MSNBC’s Rachel Maddow recently demonstrated this desire perfectly, utilising clips and quotes from Republican’s over the past three years.

Over the weekend, a New York Times piece again detailed the insatiable need for the Tea Party element of the party to force a government shutdown.

“To many Americans, the shutdown came out of nowhere. But interviews with a wide array of conservatives show that the confrontation that precipitated the crisis was the outgrowth of a long-running effort to undo the law, the Affordable Care Act, since its passage in 2010 — waged by a galaxy of conservative groups with more money, organized tactics and interconnections than is commonly known.”

Republicans can attest all they like in the aftermath – and during the shutdown as some did – about the way this was a Democrat-caused dilemma, or how it’s the last thing the G.O.P wanted.

“The President and Harry Reid should not have shut this government down,” said Texas Republican Louie Gohmert recently. “This has been coming for a long time … Democrats were waiting on a shutdown they could blame on Republicans.”

House Tea Party founder Michelle Bachman continued the party narrative stating: “This is the time to fight. We finally have the will to stand up and take on this oppressive President.”

The abovementioned quotes are what Republicans would love us all to believe was their collective motivation, but the following sums up the real cause.

“We’re not going to be disrespected,” conservative Indiana Republican Marlin Stutzman, recently told the Washington Examiner. “We have to get something out of this. And I don’t know what that even is.”

Considering the way overall public perception has turned against the party over the course of the past sixteen days – 53 per cent of Americans blame Republicans for the shutdown, compared to 31 per cent targeting the President. While Obama’s approval rating also jumped four percentage points to 51, perhaps that “something” they’ve got out of this ordeal is a drop in support in 2014’s midterms, and another presidential defeat in 2016.

If that were the case, the party would be getting exactly what it deserves.