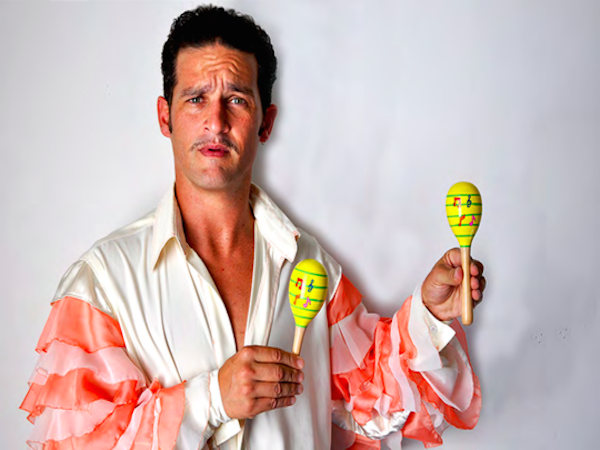 New Zealand’s Barnie Duncan, or Juan Vesuvius, is as smooth, entertaining and comedic as his stage name suggests.

Described as “bizarre, sexy, and very, very funny” by Broadway Baby, Calypso Nights stars Juan Vesuvius, a suavely ridiculous Venezuelan DJ, who invites the audience into his world of Calypso and Soca music.

“Basically, Juan is very passionate about the power of Calypso to solve the worlds problems,” Duncan says.

Calypso Nights combines vinyl record players, a microphone and a set of maracas with exceptional character comedy to create a musical fiesta.

“Using records I tell people about the history of Caribbean music. Well, not really. That’s the goal, but it kind of deviates into stupid games and jokes,” he says.

The show entertains and expands minds, with the audience delving into a world of previously unknown music.

So where did the character Juan originate?

“I just thought it was a funny name. Then I forgot about it for years and years,” he says.

“I got hired to do street performance for a suburban carnival and you could go into a costume hire store and choose whatever you wanted. I found this shirt with puffy sleeves and I thought, ‘That’s cool’. It came from there.”

Genre-defying Calypso Nights was nominated for Best Newcomer at the New Zealand International Comedy Festival in 2013. In 2014, it won the Skinny Magazine Fringe Genius Award for Most Original Production at the Edinburgh Fringe Festival.

Aside from his comedic success, Duncan has a long-standing career in acting and theatre. He has written, produced and appeared in various shows, including Power Rangers and Strange Resting Places.

Duncan says acting and comedy go hand-in-hand and that he doesn’t see himself as a traditional stand-up comedian.

“I’m playing a character and I’m telling a story. It just happens to be slightly idiotic and funny.

“Acting to me is just storytelling, and this is one way I have figured out a funny little way of doing it, that mixes comedy and DJing and character work.”

Outside of the screen and stage, Duncan DJs and produces radio documentaries under the alias Uncle Barnie. He co-founded the 15-piece afro-soul band The Hot Grits and is currently the guitarist for global dance juggernaut Weird Together.

The Latin-inspired show stems from Duncan’s love of Latin culture and music. He has lived in South America and Barcelona and can speak fluent Spanish. The all-in Latin dance party at the end of the show exemplifies this passion.

“I like making stuff that gives people a sense of communion between the audience and the performer,” he says.

Calypso Nights will play at the Melbourne International Comedy Festival from Wednesday 25 March until 7 April.