The Blues stick with Teague after a successful stint as caretaker coach. 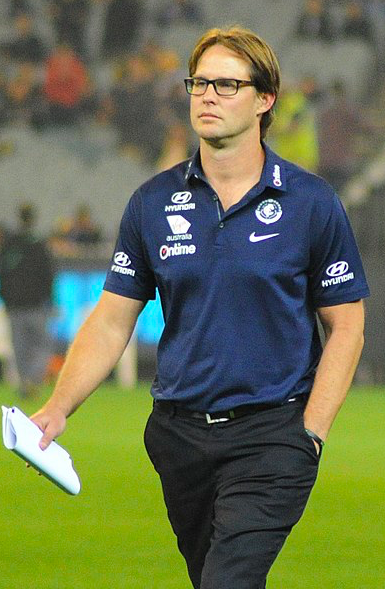 The Carlton Football Club have officially announced David Teague as the new senior coach of the club at a media conference at Ikon Park this morning.

Teague has been appointed for the next three seasons, following an impressive few months as the club’s interim coach.

The 38-year-old has taken the Blues to five wins in the last nine weeks after Brendon Bolton, who was sacked in June, had only managed four wins in his last 43 games.

Approaching the press conference, Teague’s beaming face said it all as he entered the room.

“It’s an absolute honour to get to coach this football club,” he said.

“I said to the players and I said to our supporters, I really believe in this playing group, I believe in the direction the football club is going.”

“He immediately began to instil belief and confidence in our playing group as well as showcasing an exciting brand of football,” he said.

“We could not be happier to have not only a quality coach, but a quality person such as David helping lead our club into an exciting era.”

Teague has continued a run of interim coach appointments in the AFL this year after Rhyce Shaw was promoted to the senior coaching position at North Melbourne just last month.

Teague played 83 games across six years for both North Melbourne and Carlton, winning the John Nicholls Trophy in his first year the Blues.

He arrived at Ikon Park as forward coach at the beginning of the 2018 season after previous coaching roles at West Coast, St Kilda and Adelaide.

Photo: David Teague by Flickerd available HERE and used under a Creative Commons Attribution. The image has not been modified.