‘Let the music be your master, will you heed the master’s call?’

Certainly not. And when it comes to hard-rock blues music, it is unacceptable to ignore the release of Celebration Day; the concert film of Led Zeppelin’s reunion show. 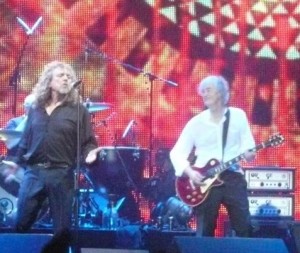 Celebration Day is scheduled to hit record stores on the 19th of November but prior to this, it was aired in cinemas on the 17th of October.

On the 10th of December 2007, the three living members of Led Zeppelin reunited to pay tribute to Ahmet Ertegun, founder of the Atlantic Records and the man that discovered Led Zeppelin.

Twenty million people from around the world applied for tickets but only 18,000 got them.

‘It worked really well, but there was a relief at the end of it,’ the innovative bass and keyboard player of the band John Paul Jones stated during the press conference for the film.

‘For me getting back to the middle of that music was a spectacular experience. I was approaching it from a different angle. Getting it through it was not miraculous, but great fun,’ added singer Robert Plant.

Commenting on the reasonable inquiry about the five years wait of the film release, John Paul Jones answered: ‘Five years is like five minutes in Zeppelin time. I am surprised we got it out so quickly.’

After watching the film, it is definitely worth the wait.

By the time Led Zeppelin plays the first note of the introductory track, Good Times, Bad  Times, it’s obvious that these men came out to rock.

‘It’s peculiar to think of creating a dynamic evening and choosing songs from 10 albums,’ Robert Plant says to the audience before the avalanche of the Dazed and Confused, but I don’t think anyone was disappointed by their choices.

The 16 song set included not only classics such as the opener Good Times Bad Times’, Kashmir, Ramble On, Black dog, Stairway to Heaven, Whole Lotta Love and ‘,Rock And Roll, but also some surprises like the disco-funk Trampled Under Foot and the maiden performance of For Your Life from the Presence album.

Although I understand that the sound failures of the show were mended in post production, all the instruments sound massive but also there are also very clear distinctions between them.

Robert Plant gives exceptional singing performances, although he deliberately avoids the high scales. He also refrains from the sexual-androgyny that made him famous, but it would have been at least ridiculous if a man in his sixties went on stage with tight jeans and open shirts, just to remind us how he was when he was young.

The dark, mystical figure of Jimmy Page steals the show with his solos being much more solid and melodic than they were in the band’s past performances. Of course his trademark double neck guitar was  there and so was the bow that made the audience shiver, as soon as it appeared in the middle part of the Dazed And Confused.

John Paul Jones is the quiet power of the band and succeeds both in the bass and in keyboards. I reckon Jones is probably one of the most underrated figures in the rock history, as few recognize his essential role in the composition and the orchestration of Led Zeppelin’s songs.

In the position of the late John Bonham, there was [probably] the only legitimate replacement, his son, Jason Bonham.

‘Jason was absolutely monumental in his performance and his playing from the very first rehearsal right through the O2 . It was really wonderful to work with him at that amount of time to do  proper full set and we really communicate with him musically; it was really good. Nobody else could have done it,’  Page said in praise.

Dick Carruthers offers us again a state-of-art music film, choosing to focus on the band’s performance, limiting shots of the audience.

It is not an easy task having to prove your musical quality and value almost 30 years after your last headline performance.

‘If you had fun [with the film], that means we done the job right,’ said Page.

Of course they know they were perfect, but would we be greedy if we asked for a second (live) installment?