If you’re a regular viewer of commercial television news over the past year or more, then you’ll be aware of the increasing use of the live cross. You know the one, where the newsreader goes live to a journalist who’s at the scene of the story.

If there’s an unfolding drama involving floods, fire or protest the live cross usually adds immediacy to the coverage. And even though there is something slightly silly about a journalist reporting from a scene many hours after an event occurred, the live cross as a post mortem can still make sense on TV news given that it adds colour and drama to what might otherwise be a rather static story. 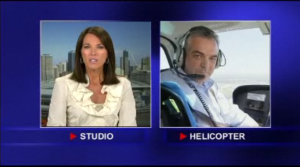 Channel 7's Peter Morris takes to the air to report on a plane... which is still on the ground

Last night’s report by Channel 7’s Peter Morris on the stranded Qantas A380 at Melbourne’s Tullamarine airport, however, took the absurdity of the live cross to new heights — literally. To get the story, Morris and the Channel 7 crew took the network’s helicopter, hovering high above (or near) the airport to tell the story.

Why was this absurd?  The whole point of the story was that the plane’s pilots abandoned the take-off. In other words, THE PLANE NEVER MADE IT OFF THE TARMAC. Why, then, do you need to get into a helicopter to tell a story about a grounded plane? Surely standing at the airport would have dramatised the event just as effectively.

You also have to wonder how committed Channel 7 are to combatting climate change. While Seven’s Yahoo!7 joint venture with Yahoo, Inc offers this page on climate change, the message doesn’t seem to have filtered down to Seven’s newsroom.