Aardman Animations tend to get a bit of a free ride when it comes to wholesome family viewing, despite their patchy record with anything non-Wallace-and-Gromit. Flushed Away was largely forgotten, The Pirates! was left half-watched and mourning the portrayal of Charles Darwin, and Chicken Run was actually quite good until you notice that it’s an uncanny metaphor for the holocaust with Mel Gibson voicing the main character. 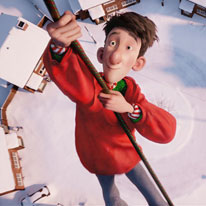 This brings me to their 2011 offering of Arthur Christmas.

Arthur Christmas, second son to Santa, takes his grandfather’s old sleigh out of mothballs and makes a frantic dash around the globe in order to put a present under the tree for a forgotten girl before Christmas morning.

It’s one of those classic ‘race against the clock’ movies with little in the way of an antagonist, just a large dose of family politics for the Claus family and of course, the obligatory exploration of the true meaning of Christmas.

The characters are serviceable in this kind of movie, if not a bit one dimensional. Arthur is wide-eyed, lanky and spends most of the movie picking himself up off the ground. His father, Santa, is absent-minded but kindly. His brother Steve Claus is efficient and militaristic. All are voiced by a cast of celebrities who, like most animated movies these days, don’t really add much and yet are deemed necessary.

The movie makes the most of flashy 3D and animation — the flying reindeer scenes are dazzling, and the scope of the militaristic elf-powered Christmas delivery operation is a smooth yet busy display. There was a lot of attention paid to the activity, but it all seems to work, even if much of it goes by in a blink of an eye. It’s almost too slick for the careful claymation one has come to associate with Aardman Animations, and it loses some of the charm and whimsy in the medium transition.

Luckily the humour seems to have made the transition more or less intact. While it appears to be broader and aims squarely at the younger audience, there should be enough to keep older members of the family amused, even if the one-note characters tend to carry the same jokes from one scenario to another.

While it’s full of holiday cheer, it’s easy to get a bit restless while viewing it. There are definitely better Christmas movies out there, but Arthur Christmas is sure to entertain and occupy the kids for a few hours.