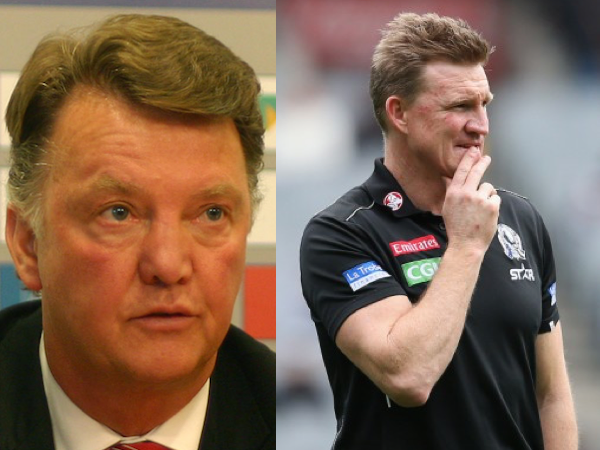 After dominating the market post World War II and becoming a towering success symbol of American capitalism, the Coca-Cola Company in 1985 decided to give birth to ‘New Coke’.

Coke’s market share had dwindled from 60% to 24% in a few decades, with challengers like Pepsi managing to outsell the product in supermarkets. Naturally, head office decided to alter their strategy.

‘Project Kansas’ or New Coke was born out of a concept that a new generation could be courted into buying the product with a new flavour. However, the moment that ‘winning’ formula changed, all hell broke loose.

From what’s been abundantly clear in the last few years, Collingwood and Manchester United have a New Coke problem.

Both are the sporting equivalent of Coke – corporate monoliths with seemingly endless reach and appeal, going through the era of sport’s transition into professionalism and coming out the other side kings of the revenue jungle.

After the eras of their great coaching despots (Mick Malthouse and Sir Alex Ferguson) have faded to the background, there is an undeniable angst that’s aimed at those tasked with picking up the pieces.

Nathan Buckley and Louis Van Gaal are an example of how the steely weight of expectation can hinder the transition from former glories to new tomorrows.

Standing in the Shadows of Giants

Even with unparalleled success elsewhere at Ajax, Barcelona and Bayern Munich, Van Gaal still feels the cold shadow of Ferguson lurking above him from the director’s seats.

A stroll through the trophy room at Old Trafford will tell you one thing – success is no longer just a physically tangible end that is silverware and prize money, but an expected outcome of the everyday. Second best is failure.

Regardless of the dips and peaks in form, sixth in the league and gritting through cup competitions is not ‘the United way’ and thus reflects poorly on the Dutchman. It’s the equivalent of portraying Jackson Pollock as a noodling hack in comparison to Pablo Picasso.

Even while Buckley watched from afar as his predecessor and mentor imploded at Carlton, he looks up at his own unlikely star – Malthouse’s Collingwod team won 42 from 51 and walked away with two minor premierships and a flag in the preceding 18 months.

Rookie coaching tenures are coarse and lumbering as is, even without having a hard act to follow.

Both teams have merged onto a similar path down to the way their squads are set up, how their team building policies are shaped and even rhetoric used.

Both clubs exist in a place where transitioning the load from the older to the young has been painful – for instance, when you think of both teams attacking verve it’s uncanny.

Travis Cloke perhaps never found the heights of Wayne Rooney, but at his peak he was a genuine match winner. Occasionally he’ll bob his head up, but he’s no longer a supreme threat.

Where else are the goals coming from for Collingwood, in terms of someone with sustainable quality at their athletic peak?

The great white hope in Darcy Moore? He’ll likely be a mainstay and a lock for the next decade, but he’s currently at Anthony Martial and (more recently) Marcus Rashford levels of inconsistency and being molded as an athlete.

There are players in the right age range, but have questionable or unknown quality. Jeremy Howe is an educated gamble, while Jesse White has done little except frustrate.

This problem extends to midfield for both Collingwood and United, with a lot of the heavy lifting done on the other side of 28. While the next 18 months will see that change, it will no doubt be a staggered process rather than a smooth transition.

What hasn’t helped an expectation of continued competitiveness, which has forced them to bring in experience that lacks a certain match-winning quality.

Adding Levi Greenwood (and even Travis Varcoe) was done for the same reason as Marouane Fellaini moved to Old Trafford:  trying to source a starting player at their peak, even though they’ll never go supernova. To an extent, a past it Bastian Schweinsteiger is a glaring example of needing battle-hardened bodies on the ground, regardless of his CV and form.

Someone younger with a higher ceiling could have been sourced for these positions, but the rhetoric and messaging used denied both clubs the passage of time. Pert in 2014 was talking about premierships in the short term, before then again in the 2015 pre-season speaking about aiming deep into finals. United maintained last summer they could contest and win both the title and Champions League.

While it’s a stretch to ask for sympathy for these juggernauts, imagine you’re in Buckley or van Gaal’s position. Building a championship team takes time, money and a few seasons of tactical tweaking.

Without expectation, most other sides in the AFL (and even to the Premier League) are given a licence to fall away to re-tool briefly. The ability to pick up players with a higher ceilings and prune the roster in a careful way, rather than settling for whatever experience is there on the open market to fill squad gaps.

For Buckley and van Gaal there’s a stark disconnect between trying to juggle the appearance of constant excellence, while sculpting a team that only comes about through the process of trial and error.

Pert and Woodward are making those statements from a purely fiscal and business perspective – hype and season tickets need to be sold to relevant stakeholders. Even if these football departments have all the resources in the world, money just can’t magically change the reality of re-tooling a whole football team overnight.

It’s exactly how the resources of the Coca-Cola Company couldn’t just emulate the enormous success of their original product with just a short term change of direction.

According to Mark Pendergrast’s book For God, Country and Coca-Cola: The Definitive History of the Great American Soft Drink and the Company that Makes It, ‘New Coke’ was so unpopular its ads were booed at sporting events. Even Fidel Castro publicly blasted the company, calling ‘New Coke’ a sign of “American capitalist decadence”.

In the aftermath of the product’s failure, Coca-Cola’s director of communications Carlton Curtis said in Thomas Oliver’s The Real Coke, the Real Story he was convinced the outrage was aimed more at the idea of the old formula of Coke leaving the shelves, rather than disapproval at the taste of the new one.

Which perhaps explains the amplified angst around Post-Malthouse Collingwood and Post-Ferguson United – maybe it’s a stage of grieving what’s gone, rather than an outright rejection of the task at hand. Add the schadenfreude of outsiders, and the perception of failure is exaggerated.

This is far from writing either Collingwood and United off or expecting normal service to resume, but rather how difficult reinvention is when the messaging creates expectations on a new iteration that can’t be fulfilled.

Buckley and van Gaal’s efforts have been far from perfect, but their mistakes are inflated and have had to deal with circumstances influenced by a machine much larger than them both.

Ben Cuzzupe is Upstart’s Sport Editor and a final year Bachelor of Arts student. Follow him on Twitter @BenCuzzupe