What normally is a tough year is even harder for the class of 2020, with this year’s year 12s facing a string of disruptions caused by the COVID-19 pandemic 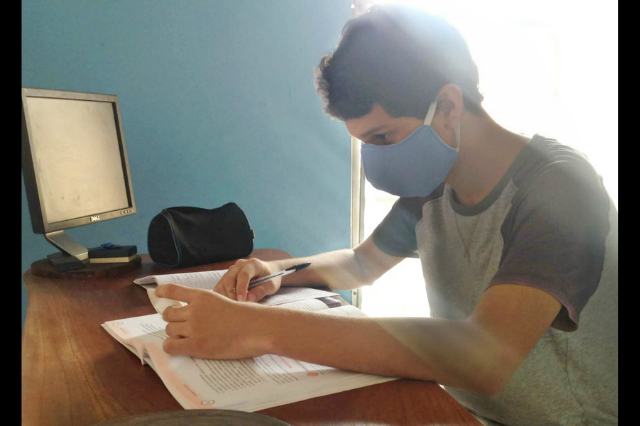 In a normal year, study halls and libraries would be buzzing with nervous Year 12 VCE students, who state-wide would be preparing for their final exams – something that they’ve spent 13 years of their life working towards. But this year isn’t like any other year.

COVID-19 has put increased pressure on over 180,000 Year 12 students across Australia this year. While the majority of Australian students have returned to the classroom, not everyone is back to their usual routine. Victoria’s second-wave has placed students in the middle of their second stint of at-home learning, making an already difficult year even harder.

Northside Christian College student Madeline Naumovski says the move to online learning has been an adjustment, but that hasn’t stopped her from pursuing her studies. Instead, it’s the determination to do well which motivates her.

“I have worked hard for 13 years of my life and I want something to be reflected upon that so wanting to do well in my exams is motivating me,” Naumovski told upstart.

“I would obviously prefer to be at school just for the face-to-face learning and the interactions, but for myself personally it hasn’t been too bad at home through remote learning because I am pretty independent anyway.”

Victorian students are now at the final hurdle with exams fast approaching. Naumovski is setting her sights on the English exam scheduled for November 10.

“I’m trying to use all this extra time I have to my advantage and obviously this year has been pretty bad in a way but I’m just looking at the positives of it,” she said. “I can see the finish line.”

Victoria’s second wave saw students switch from face-to-face to online learning twice this year, disrupting the continuity of their studies. Significant dates relating to the exam timetable and the General Achievement Test (GAT) were also undetermined for some time, causing Yeshivah College student Eli Ohaion and other Year 12s across the state to endure extra stress and uncertainty during the first lockdown.

“[It] was really tough because [the first lockdown] was super different which made me fall off the wagon a little bit and [I] had to catch back up. But then going back to school, [it] felt really good to see my mates again even if it was a bit minimal,” Ohaion told upstart.

Looking back, Ohaion says the first lockdown prepared both students and teachers for the second lockdown as they knew what to expect and how to manage remote learning.

“Coming back into lockdown was much smoother even though the restrictions were a lot harsher. It just felt like more was being done for Year 12 students because in the first lockdown, everything was up in the air,” he said.

“Now VCAA (Victorian Curriculum Assessment Authority) and the government have been pretty vocal and [are] telling us exactly what is happening, so [I am] a bit less stressed in terms of knowing what the future holds and also transitioning was a lot easier because I knew it was coming.”

It’s not only the familiar setting of the school yard that students are missing, with traditional end-of-year celebrations such as formals cancelled and a high chance that most graduations will relocate online through Zoom. While this comes as a disappointment for some students, Naumovski is looking at the brighter side, perceiving it as a blessing in disguise as the cancelled events are freeing up extra study time.

“I think pretty early on we all came to the realisation that we weren’t going to get [the normal Year 12 experience],” she said.

“It is disheartening to see other states getting all those Year 12 benefits but honestly, it has given us more time to study and make something out of it.”

The situation is the same for Ohaion, despite having a VCE cohort of just 14 students. The aspiring psychologist says his cohort is closer than ever and has praised the Jewish school for doing everything they can to recreate the Year 12 experience, even if it’s online.

“They’ve set up study sessions during free periods on Microsoft Teams so we can just hop on. People will be coming in and out and you can chat while you study so that’s been a good way for my school to stay connected and feel like we still get the Year 12 experience,” he said.

“We may have missed out on quite a lot but at the same time I think that it’s brought my year level closer together so I’m not fussed missing out on all the year 12 stuff.”

With Year 12 already one of the most stressful years of a teenager’s life, Year 12 during a lockdown is likely to cause plenty of mental stress and fatigue.

The 18-year-old has admired Yeshivah College’s commitment to keep all students united, with the use of a school psychologist proving to be effective.

“My school is really good at keeping connected with the students and what we have done is every Monday with my co-ordinator we have a meeting and last week she brought in the school psychologist and he was giving us some tips of how we can stay positive and stay healthy during this time mentally and also physically,” Ohaion said.

Looking into the future, both Naumovski and Ohaion are hoping to transition into university. A switch from Events Management to Public Relations seems likely for Naumovski. To get started, she has taken advantage of La Trobe University programs, VCE Plus, which enables VCE students to take a university subject while in high school. This has also lessened her VCE study load.

“I’m doing less subjects than what normal people would do. I’m only doing three subjects at school and VCE Plus at La Trobe which has given me a head start into uni,” she said.

“It has given me a break from school which is good as well.”

Ohaion hopes to continue with his hard work and study Psychology at Monash.

“I decided at the beginning of the year that I was going to focus hard and get a good score and it seems like COVID [sic] hasn’t prevented that from happening thus far,” he said.

James Strebinos is in his final year studying sports journalism at La Trobe University, you can find him on Twitter @James_Strebinos.

Photo: A Honduran student making use of virtual classes in coronavirus pandemic in Honduras, available HERE and used under a Creative Commons Attribution. The image has not been modified.