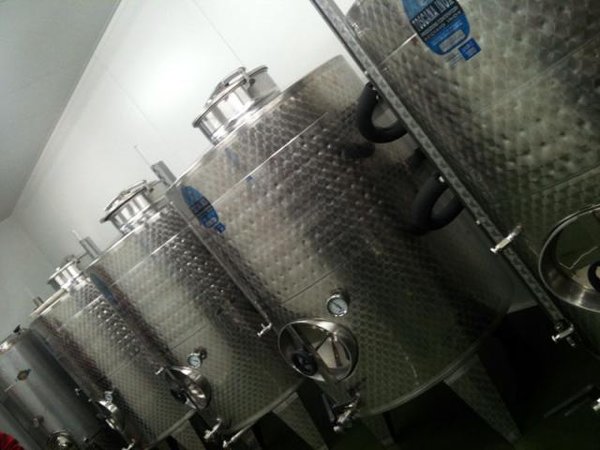 Walking up to Kooinda Boutique Brewery in West Heidelberg, I imagined something a bit different; something secretive, alluringly exclusive.

That expectation fell away as the converted warehouse came into view.

The main door was open. Inside, men were busy bottling and brewing beer, yet none was too busy to offer a friendly nod hello.

Cox is young and overtly passionate. The raw happiness he expresses when talking about beer is striking. It’s fitting that Kooinda’s catchy name translates to “happy place”.

“The craft beer scene is changing pretty quickly in Australia, that’s why we’re doubling the size of our kettles – to produce more beer.”

Microbreweries are sprouting up around Australia, each crafting “hand-made” ales and lagers produced in smaller quantities than the comparatively monolithic giants like CUB.

“It’s all about giving people the option, and giving them the chance to decide, rather than telling them through huge advertising campaigns,” Cox says.

However, kick-starting a brewery remains incredibly risky, which keeps many prospective brewers away.

“We pay excise tax every Monday morning, the same amount as CUB. There’s no incentive to start up,” Cox laments.

“When you’re paying tax straight away and we have a turnover time of 90 days from crushing grain to being paid for our product, it makes it hard to start up.”

Kooinda itself battled through an initially bumpy launch.

“There were four of us, and at the time only one owned a house, so we built the brewery in his backyard in Rosanna,” he says.

“It took us about a year to build the system, and everyone had full time jobs. We did this in our spare time, but we were fairly serious about where we wanted to take it.”

Although the enthusiasm and work ethic were there, the group struggled in their first attempt to lift their idea of the ground.

“We bought the tanks and equipment and made our first brew but we couldn’t cool it down so we had to dump it,” Cox says.

“Our heat exchanger was connected to the garden hose and didn’t do the job in any way, shape or form.”

“Luckily, one of the guys had a swimming pool and he said, ‘what are we worried about, we have 40,000 litres right here!’ We used to siphon the pool water to prime the pump so that the heat exchanger could work.”

Being the first residential licensed brewery in Australia was an incredible feat for the one-time home brewers, but eventually the time came to expand operations.

“We moved into the factory three years ago with the help of another investor and in the first year we did about 14,000 litres of beer,” he says.

So why open a brewery in the first place?

“I got out-drunk by German girls when I was overseas, but I came back to Australia and the lack of options is terrible. It’s all the same lager-style beer. You could walk into a joint and they’ll say that they have a good beer range, and they’ll have VB and XXXX. They didn’t even know that there are different styles of beers.”

Different styles are what craft brewers are all about: pale ales, IPAs, stouts, hefeweizen, pilsner, altbier. The list is endless.

“Craft beer is going the way of wine. There are styles for summer and winter like your witbier and porters respectively,” he says.

With craft beer festivals such as the Good Beer Week and the Great Beer SpecTAPular becoming more popular, Cox crunches the numbers.

“Craft beer is us against them [CUB, Lion Nathan]. It’s about 2.8% of the market. Of that, Matilda Bay and Little Creatures is 2%. That leaves 0.8% for us little guys.

If someone’s prepared to try a craft beer, they’ll eventually try yours anyway.”