The centenary of the landing at Gallipoli is drawing ever nearer, but Australians are no closer to reconciling the many opinions over what the Anzac legend means to a modern Australia.

That a diversity of opinion exists is a good thing. It’s the only thing that stops Anzac Day from becoming a sweeping grand narrative, a story that pretends to have all the answers, and a mythology that represents one view of Australian identity and doesn’t allow for disagreement.

The resurgence of the Anzac legend over the last 30 years has turned Anzac Day into one of religious significance. In the words of Kevin Rudd, speaking as prime minister at the 2010 Anzac Day ceremony, ‘ANZAC is profoundly spiritual’ and, ‘it shapes deeply how we see the world’.

In Saturday’s Age, Martin Flanagan wrote, in reference to the responsibilities of journalists, that ‘religious and political ideologues insist on a version of the world as they wish it to be’.

This insistence of an ideology brooks no disagreement, and the Anzac legend has become much like this.

It’s so deeply tied up with ideas of mateship and sacrifice, of service and comradeship – ideas that have somehow become central to Australian identity, in spite of their relevance to groups of soldiers all over the world – that it’s become very hard to criticise. Yet there is a continuing responsibility and need for it to be questioned. 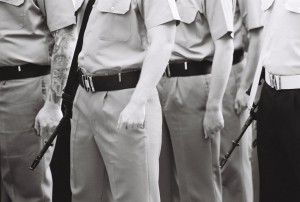 On Anzac Day, debates over war are whittled down and thinned so that there is no debate at all; instead there are just two things: celebration and commemoration.

Yes, stories of individual veterans are told and we are reminded to think of Australians serving overseas.

But war itself ceases to be seen or critiqued, as though we cannot see the wood for the trees. Anything that questions the very basis of the ideology behind a military legend struggles to coexist with something as big and powerful as Anzac.

Anzac denies the existence of pacifism or non-violence, because within the Anzac legend these concepts become disrespectful to the memory of Australian soldiers.

The aftermath of the Vietnam War is sometimes used as an excuse not to critique war itself. In the face of widespread opposition to the war, servicemen returned to a country who did not want acknowledge them. They endured, according to an article on the eve of last year’s Anzac Day, ‘the devastating betrayal of their countrymen…’ For some, the Anzac legend is a means of ensuring that a generation of soldiers don’t face that reception again.

As one comment on upstart’s Anzac Day opinion piece last year noted, ‘woe betide any person who has not performed military service or who doesn’t have close relatives who did so who dares to question that status [of Anzacs].’

It is almost impossible to critique the legend that Anzac has become without someone saying, what about all those men who died – men who fought for your country? You cannot throw stones at their memory.

It’s this that represents the way in which the Anzac legend has become a grand narrative, a story that offers overarching meaning and that resists criticism.

The Anzac legend needs to be open to discussion, and questions must continue to be asked about its relevance to national identity. This need not imply any disrespect to veterans or to current members of the defence force.

Allowing Anzac Day to become a big, all-encompassing narrative, a day on which only certain opinions and words are allowed, does no service to the Anzac legend. The story of Gallipoli deserves to be remembered with context and perspective, not as an airbrushed moment in history.

Gallipoli, and the legend that has grown out of it, needs to be recognised as multi-faceted and flawed, like any other history.

It needs to become OK that the Anzac myth does not work for everyone.

Suzannah Marshall Macbeth is a Master of Global Communications student at La Trobe University and a member of the upstart editorial team.